Turning over a new leaf

To continue our series on the new generation of conservationists, Life talks to Pharadon Phonamnuai about the essence and fun of planting trees

Among the community of music lovers in Chiang Mai, the name Pharadon "Por" Phonamnuai is associated with North Gate Jazz, a popular haunt and favourite hangout for local musicians on Si Phum Road. The lanky 34-year-old saxophonist is also known for his Loem Tai Pord (Wind Beneath My Breath) travelogue based on his hitchhiking adventure from Chiang Mai to Paris with just 20,000 baht and a saxophone.

But Pharadon wears another hat; one for the urban conservation scene in Chiang Mai -- he's another of the new-generation of environmentalists whose image is different from the hard-line activists of old.

A trained architect, Pharadon joined hands with a network of local architects earlier this year to found a group called Mue Yen Mueng Yen (Cool Hands, Cool City), a civic group that is blazing a trail of urban tree plantation in the inner city of Chiang Mai.

The campaign captured the public attention last July when, through using viral media, the group encouraged local people to plant 5,000 trees, 800 of which around the ancient moat in the inner city of Chiang Mai.

Inspired by the Ice Bucket Challenge method of sharing, individuals would ask friends to plant a single tree, post the photo and share the GPS location on social media. The group also set up a number of activities and events to distribute 5,000 tree saplings and seeds to local people.

"Planting trees is supposed to be a happy activity, and a social gathering that involves friends and a good feeling like love and passion. I would be happy to plant trees with friends, and have a nice cold drink with me playing saxophone," Pharadon said. 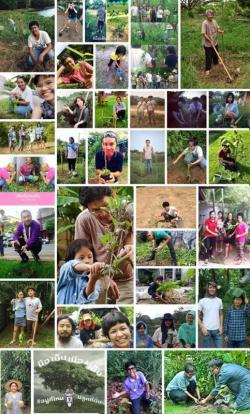 Photos collected from the viral campaigns.

Pharadon says that there are many tree planting campaigns taking place at the moment, yet only a few address the survival rate of the trees.

"Planting trees is easy," he added. "Taking care and ensuring they survive is not. There are a number of tree planting campaigns but how many schemes have a monitoring system and management to track those trees and their survival rates?

"I ask serious questions about what trees really need. The bottom line is that trees need love and care, which is the same feeling people derive from love and friendship."

Pharadon started with planting a tree right in front of Chiang Mai's North Gate Jazz Bar. But it seemed to be an isolated act, a mundane and lonely activity. He then challenged the owner of the adjacent bar to plant a tree. The deal was that whoever's tree died before the end of the year had to jump in the city's moat.

Pharadon is a Bangkok native, but grew up in Chiang Mai, which he now calls home. Being an architect brings him close to the environment and his surroundings and experiences he gained from travelling -- hitchhiking around Europe and Asia has made him see the connection between humans and nature.

But what made Pharadon and other members of the group actually launch the campaign was the worsening haze in Chiang Mai that usually occurs every year, and rising global temperatures. As trees are also being brought down to make way for buildings, roads and other infrastructure, the most instant, personal and easy thing to do, the group decided, was to plant a tree.

As a northerner, Pharadon loves to trek in the forests and hills of Chiang Mai and other forest areas. The cheerful saxophonist says he is deeply inspired by nature and the philosophy of conservation of the Pakakayor, an ethnic Karen hilltribe best known for its forest conservation principle. Every newborn child in the tribe has its umbilical cord put in a bamboo rod and tied to a tree to mark their birth. 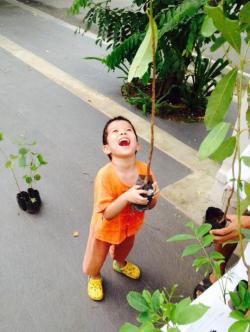 With Mue Yen Mueng Yen, everyone has their own tree to take care of.

"Each Pakakayor then has their own tree that he or she will take good care of. People in cities report their birth at the city registration office while Pakakayor people report with trees and nature."

The Mue Yen Mueng Yen campaign emulates part of this philosophy by encouraging an individual to plant a single tree in a convenient place, even indoors, in an office or at a desk.

"The idea is that you have your own tree and you have a supportive network of friends on social media to share ideas and talk and that is the process of learning that I believe is an essential part of tree conservation," he said.

The first phase of Mue Yen Mueng Yen has already been completed, with almost 5,000 trees being distributed.

The group is now working with the Chiang Mai Municipality to plant trees on Tha Pae Road, the first road in Chiang Mai where electrical grids were put underground.

"Despite being the first street with underground electric wires, it is surprisingly bare of trees. There is no community or civic group working on this street, just business groups that live separately without co-operating with others. The Tha Pae Road project is challenging work because if you can make the road leafy with trees, you can plant trees on any street."

Now, the road is paved with concrete, without a ground surface for trees to grow. Architects in the group are designing a new pavement and activities for the next tree planting campaign.

One part of the design might see the enlargement of the pavement for more tree planting.

"While other cities have enlarged the roads, the municipality of Chiang Mai Road might be the first to enlarge pavement areas to plant trees." 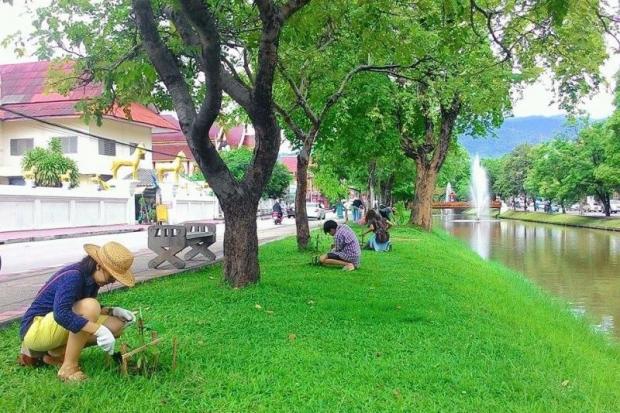 The king of takeaway