In a historic movement for transgender rights in Thailand, the Thai Red Cross Aids Research Centre, with USAid and partners, has unveiled the Tangerine Community Health Centre -- the first clinic in Thailand to provide trans-specific healthcare and counselling services.

Transgenders -- especially transwomen -- have been fixtures in the tourism and entertainment industries. However, stigma and discrimination has prevented them from accessing many public services. Healthcare is one of the most crucial areas they are vulnerable.

"We realise that transgender is an underserved population. At first, even myself, I thought that transgenders and MSM [men who have sex with men] were the same, which is wrong. Totally wrong. They have different cultures. They want different services," said Professor Emeritus Praphan Phanuphak, director of Thai Red Cross Aids Research Centre.

The Tangerine Centre operates on the second floor of the Thai Red Cross Aids Research Centre on Ratchadamri Road, on weekdays from 7.30am-4.30pm. Services -- intended for both transwomen and transmen -- include hormone administration, tests for sexually transmitted diseases such as hepatitis and HIV, Pap smear, anoscopy and neovaginoscopy.

The clinic is managed by trained transgender personnel and gender-sensitive medical professionals.

Chairing the opening ceremony late last year was US Ambassador Glyn Davies, who hopes the Tangerine Centre will lead the region in improving transgender access to healthcare, as well as contributing to an end to Aids. The centre receives funding from USAid. It is implemented by RTI International and partners.

"We support these efforts because we recognise that transgender rights are human rights that we all should've realised long ago," said Davies. "But -- today and here -- I think we make a good beginning. To achieve our full potential, we must draw upon all of our strength and leave no one behind."

Nicha Rongram, communications director of the Thai Transgender Alliance (Thai TGA) and first runner-up of Miss Tiffany Universe 2012, was also presented at the opening day. She called the Tangerine Centre an immense step towards advocacy for trans health, commending that it conforms to the Yogyakarta Principles on the Application of International Human Rights Law in Relation to Sexual Orientation and Gender Identity, which states that everyone has the right to the highest attainable standard of physical and mental health without discrimination.

"Medical services are part of basic human rights that everybody -- transgender people included -- are entitled to receive," said Nicha. She further stated that Thailand's legal structure and policy which centred on heteronormativity unfortunately contributed in making the transgender population socially and culturally vulnerable.

Another transwoman, Jetsada Taesombat -- executive director of the Thai TGA -- is very glad for the introduction of the Tangerine Centre. She recounted how, prior to Tangerine -- many transwomen were left seeking knowledge and counselling from fellow trans regarding hormone usage for gender affirmation.

"The advice was always based on experience, which can be dangerous as everyone's experience always varies," said Jetsada. Before having a separate clinic for transgender, the community was mostly left with limited facilities that can cater to their needs. Public hospitals were one option that many trans would prefer to avoid, unless they were very sick.

"The hospital staff would call me 'Mister Jetsada' and every single person would look when I got up. It was very uncomfortable."

Many post-op transwomen were also embarrassed to seek help from a gynaecologist as their title still says "mister". Some transwomen were directed to men's health clinics even though the sexuality and behaviours of the two are vastly different. The combined services of the past has proven to be awkward and uncomfortable.

"There were ads featuring men with six-packs everywhere. Transwomen are not MSM. People should recognise us as women," she said, adding that -- despite higher costs -- many trans ended up going to private hospitals for better services and gender-sensitive staff.

Other places that provide healthcare services for transgenders include the Sisters Foundation in Pattaya and the Gender Variation (Gen-V) Clinic at Ramathibodi Hospital, Bangkok. The Gen-V Clinic caters to adolescences only, for now.

"To be honest, we don't really need a school or a hospital especially set aside for trans. If we keep on separating, how can we coexist peacefully in society?" said Jetsada. "However, with Tangerine, I don't view it as a separation. We need Tangerine, right now, as there's not enough knowledge body within our existing healthcare system. We hope, in the future, states will adapt and apply the Tangerine model to public hospitals."

All public services need to view humans in diversity, said Jetsada. The Thai TGA is now pushing for gender recognition, which the team hopes will solve many problems being faced by transgenders and the LGBT community. Fairness in society is what they're trying to achieve.

"It's sad that our law only sees men and women. Those who don't fall under the 'straight' umbrella are being neglected and can't access the state's services. What can we do to make them see everyone equally as human?" 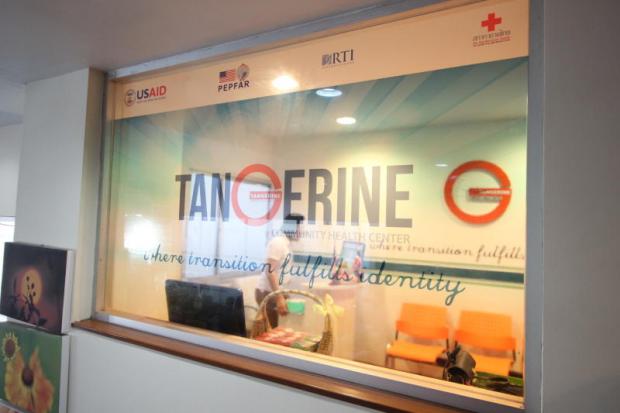