A sauce of inspiration

From humble origins, Si Racha's most famous condiment is so popular that producers are fighting for market share.

No unpopular food will ever inspire sellers to start savaging each other for customers. On the other hand, if the food product is widely enjoyed, has been around for a long time and goes well with a variety of different kinds of dishes, it may inspire competition and appear on the shelves under many brand names to give buyers a choice. 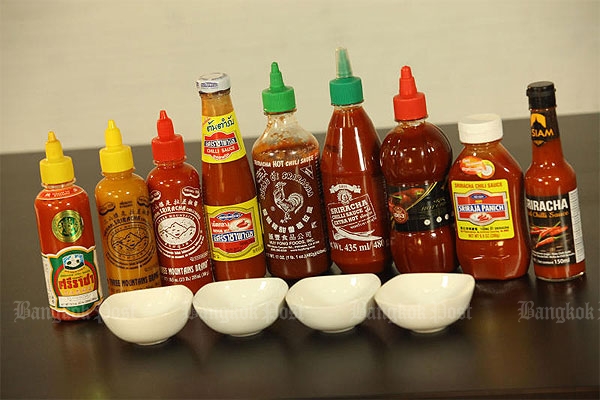 Feel the heat: Consumers have a wide array of Si Racha sauce brands to choose from.

One good example of a product of the latter kind is Si Racha chilli sauce, often spelled Sriracha. It has become so widely popular that competition in the market is hotter than the fiercest of the chilli peppers used to make it.

Chilli sauces are part of the culinary culture of many Asian countries. China, the Philippines, Indonesia, Malaysia, Vietnam, Cambodia and Myanmar all have their own versions, and even the United States has its Tabasco sauce and the notorious Dave’s Insanity Sauce, the hottest one of all. Considering how long the list is, and how far it ranges, it might be said that chilli sauces are a necessity in the world of food.

Si Racha chilli sauce gets its name from a small seaside amphoe in Chon Buri province, the place where it was invented and first made. After its first appearance it took many years for the sauce to achieve the kind of universal popularity it enjoys now. Today, bottles of Si Racha sauce can be found in almost every Thai household, and if any home kitchen or restaurant prepares an omelette and serves it without some of the sauce on the side, it is considered a hanging offence.

The taste for Si Racha sauce as a seasoning has spread to include many kinds of dishes. People in seaside provinces like Chon Buri, Rayong, Phetchaburi and Prachuap Khiri Khan have it at the ready when they eat all kinds of noodle dishes, hoy thawt (mussels fried with egg) or fried rice. Even in Laos there will be a bottle of it on the table to add zip to the beef noodle dish called pho. For such a local product, it has been enjoying a spectacular career.

This success has made it a perfect battleground for competition warfare. Many companies now offer Si Racha chilli sauce under different brand names, especially in Thailand, where you can see them jockeying for space on supermarket shelves. And it isn’t only Thai companies that are marketing these products. International giants like Heinz and McCormick make versions of the sauce, which they sell under the name “Sriracha seasoning”, and it is also sold in the United States under the brand name Huy Fong, manufactured by a company whose owner is Vietnamese. Annual sales for all of these brands are enormous.

The appearance of the Huy Fong brand has irritated one Thai company that manufactures the sauce that claims that its own version is the authentic one, and there are many other people in Thailand whose misguided patriotism leads them to charge that Si Racha sauce has been stolen by foreigners.

With the sauce now so famous and with so many claims being made about it, it isn’t just or fair to neglect its background and the actual facts concerning its origin.

This information is supplied by the Chomrom Rak Si Racha (The Si Racha Lovers’ Association), a small society of Si Racha natives who love their home turf and who interviewed Thawat Wiphisamakun, now 88 years old, who is known locally as Ah Pae. He makes the original version for sale.

Ah Pae explained that his maternal grandmother, who had a general purpose store in Si Racha, had many customers, some of whom were Burmese who worked in a local sawmill, and that it was these workers who supplied the original formula.

“Originally [amphoe] Si Racha extended far into the mainland and had dense forests,” he said. “Timber cut there was transported to the sawmill on the coast by a small railroad. The Burmese came into my grandmother’s store to buy chillies, salt, sugar and vinegar, and told her they were taking them to pound chilli sauce in a stone mortar for their own use. Eventually she started making the sauce herself, both to eat at home with the family and to sell to local customers.

“Some time later Kimsua Thimkrachang, who also lived in Si Racha, started coming to buy chillies, salt, sugar and vinegar from my grandmother. He would buy them in big quantities and she learned that Mr Kimsua was also making the chilli sauce for sale. He sold it under the brand name Sauce Si Racha Traa Phukhao Thong [Golden Mountain Brand Si Racha Sauce] with a picture of the Golden Mountain Temple on the label. The name on the logo was Si Racha Phanich.”

Today he still sells it under the same brand name, with the words “Original Recipe” on the label.

That is the history of Si Racha chilli sauce.

But other developments have followed. Koh Loy Brand Si Racha sauce was purchased from its owner, Thanom Thimkrachang, by the Thai Theperos Company, a major Thai food product company that makes a variety of flavouring sauces sold under the trade name Phukhao Thong (Golden Mountain again, but this time not the temple). They bought the trade name Si Racha Phanich in 1998 and the label on every bottle states that it uses the original recipe. It has become extremely popular because the use of the original manufacturer’s trade name gives consumers confidence that they are getting the real thing.

In the war for buyers among Si Racha sauce manufacturers, anyone can win because customers are free to choose which brand they want. It depends on the strategies each company uses to attract them.

For example, Thai companies use an old logo that people trusted in the past. The Vietnamese manufacturer in the US emphasises simplicity, printing the label in a single colour and keeping it plain to create the impression of a very old product with a long history. The sauce is packaged in plastic bottles so it can be squeezed out easily.

Other companies will have other approaches to help their Si Racha sauce penetrate the market and find its way into as many kitchens as possible. Competition is the normal thing in commerce, and when Thais get out of sorts because of offended patriotism when competitors appear, this is a very narrow-minded attitude.

It is making too much of a small issue, especially when you consider that Si Racha chilli sauce is growing constantly in international popularity and that every bottle of it in every home and restaurant bears the name of a small seaside area in Thailand. This is a phenomenon just as singular as the flavour and spicy bite of the sauce that is already among the most popular in the world.