At the borders of ecological destruction
Life
Social & Lifestyle

At the borders of ecological destruction

The Xayaburi Dam project on the Mekong is just one of the huge construction schemes championed by the AEC. To continue our series on the new generation of conservationists, Life spoke to a campaigner fighting to stand up for forgotten local communities

A new year is often a time for joyful celebration. But Pianporn Deetes bid farewell to 2015 with a heavy heart.

"The Administrative Court gave me the most cruel Christmas ever. My spirit was dampened throughout the New Year period," she said.

Pianporn is remembering her experience listening to the ruling on the Xayaburi Dam on Dec 25. The lawsuit -- in which 37 villagers from eight provinces in Thailand affected by the project sued the Energy Ministry and Electricity Generating Authority of Thailand for allegedly signing a power purchase agreement illegally -- is a landmark case since it was the first time people have gone to court for environmental and community rights protection from a transborder project championed by the Asean Economic Community (AEC). The dam is now being constructed, with investment from Thailand, on the Mekong River in Laos. When finished, over 90% of electricity from the dam will be sold to Thailand.

The Administrative Court dismissed the charge against Thai authorities of negligence of duty. The plaintiffs accused the project of lacking real public participation. They also said that the environmental impact assessment did not include the transborder impact caused by the dam on the river that runs through Thailand, Cambodia and Vietnam.

Dealing with defeat is part of the job. For 14 years Pianporn -- who's a campaign co-ordinator for International Rivers, a US-headquartered NGO working to protect rivers and the rights of communities -- has witnessed small communities being wiped out to make way for development projects.

"I always remind myself that our campaign and our job as environmental conservationists is all about raising awareness and empowering local communities. It is time consuming work, not the kind of job that can give you an instant triumph. You can never shout 'hooray!' and celebrate the victory," she said.

Shedding tears at the verdict, Pianporn then moved on. She packed her bags the day after and visited her hometown in Chiang Rai, spending a few nights camping in national parks. She gazed at stars and watched the river, which soothed her mind and renewed her sense of purpose. She returned to Bangkok, and now she is working with villagers and a lawyer to file an appeal in the Supreme Administrative Court by the end of this month. 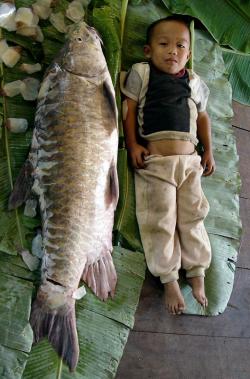 A Karen boy lies next to a fish caught in the Salween River.

The lawsuit is not just a fight between David and Goliath -- between small villagers against big investors -- which we have seen many times before. Pianporn emphasises that the recent verdict from the court reflects the fact that the AEC still lacks a mechanism to cope with transborder violations of local community rights, and the prospect of shared benefits among the countries comes with the prospect of shared obstacles.

Dam projects along the Mekong River have been debated over the past decade. After its rise to become an economic power, China has already built a series of dams on the upper Mekong, known as Lancang River, that affects the water levels downstream. On the lower Mekong, Laos plans to build 12 more dams, starting with Xayaburi Dam, and followed by Don Sahong Dam, on a tributary of the Mekong.

These projects have caused fear among villagers of many nations, while the Cambodian and Vietnamese governments openly voice their concerns about the changes in water flow. Fish spawning and farming could be badly affected as water levels are altered. Thus, the lawsuit is the first test case on transborder environmental impacts in the region.

"AEC comes into action this year, and people talk about economic opportunities, larger markets," said Pianporn. "But not many people talk about requiring investors and developers to act responsibly and fairly with local communities. Asean co-operation means a number of transborder issues, but Thailand is not aware of this. During 10 days of haze from Indonesia, for example, the government did not mention a word about transborder problems [though it clearly was one].

"We hope the lawsuit and the campaign calling for more public participation will help make development in AEC more sustainable."

What Pianporn and the villagers are worried about is not mere paranoia or an overreaction. Last week, the Thai military government, faced with the forecast of water shortages, considered the idea of diverting water from the Salween River through Mei and Yom rivers in the western region, and from the eastern Mekong River through tributary rivers in Nong Khai and Udon provinces, to replenish drying dams. The water diversion project in the Mekong might lead to more transborder problems because a huge amount of water will be diverted during the dry season in the region. According to the Mekong River Commission, any water diversion project on the river needs to get agreement from countries such as Laos, Cambodia and Vietnam, because the river plays an important part in the livelihoods of the people in those countries as well.

Pianporn said her line of work is not driven by emotions, but a sense that something can be done to at least correct the unfair treatment of the underprivileged. 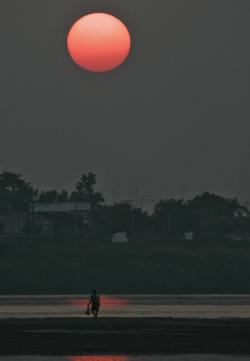 In this photo file, taken on Dec. 1, 2004,  a man walks along the Mekong River at sunset near Vientiane, Laos. Dubbed as the first dam to black Lower Mekong River, the construction began in 2012. The $3.8 billion Xayaburi dam project is slated for the wilds of northern Laos and aimed at generating power mostly for sale to Thailand. It pits villagers, activists and Vietnam against Thai interests and the Laotian government in its hopes of earning foreign exchange in one of the world's poorest countries. (AP Photo/David Longstreath)

"People usually jibe that NGO activists are overly romantic people who try to freeze time," she said. "That is just not true. We know the world has changed and local communities need to change. But local villagers should also have a right to determine their lives. They are not just objects that sit around and wait passively to be relocated."

Pianporn, now 36, admits that a career in activism wasn't what she originally planned on, even though her background seems to have groomed her for the job. She is the daughter of esteemed rights commissioner and former Chiang Rai senator Tuenjai Deetes. She was raised in a mountainous hilltribe village where her parents worked as volunteer teachers. Young Pianporn developed an appreciation of nature because of a childhood spent with hilltribe kids, playing in the ravines with strange pebbles and rocks. After graduating from Chiang Mai University, where she studied English literature, she started working in her early 20s as a researcher for a campaign against dam construction on the Salween River in Myanmar.

From learning about the "unfair social structure" in university, Pianporn said she was also inspired by the activist and scholar Sulak Sivaraksa, who chained himself to a tree to protest against the Thai-Burmese gas pipeline which requires a large swathe of forest to be cleared. Once she came into the world of environmental campaigning, she herself has witnessed the defeat of small communities and poor villagers, notably at Moon River affected by Pak Moon Dam, as well as other forest protection policies and infrastructure projects.

"Activism is not a career, but a way of life," said Pianporn.

Her story somehow testifies to the life of environmental activists in Thailand -- and many places in the region. To work in environmental conservation means accepting a small monthly salary, no bonus, not to mention temporary contracts which can be scrapped when the donation funds run out. The nature of the work also weighs down on the activists whose work is synonymous with problems and despair -- villages being evicted, people uprooted, forests and nature pillaged. Then there's the risk. According to 2014 statistics from Union for Civil Liberty, a Bangkok-based NGO, one grass-roots activist has disappeared and 33 have been killed in the past 20 years in Thailand.

"The job may not give you rewards in terms of money. But it gives you the opportunity to meet friends who share the same goal, the same beliefs," said Pianporn.

Naturally when life and work get her down -- and that can be often, such as when she heard the recent court verdict -- she finds inspiration from nature.

"When I feel depressed with my work, I just look at the river, maybe at local fishermen catching fish, or just the view of the sunset. I feel the serenity, and that is worth fighting for. I feel that what I do is right and I feel proud of what I fight for. That is my big reward with this career," she added. 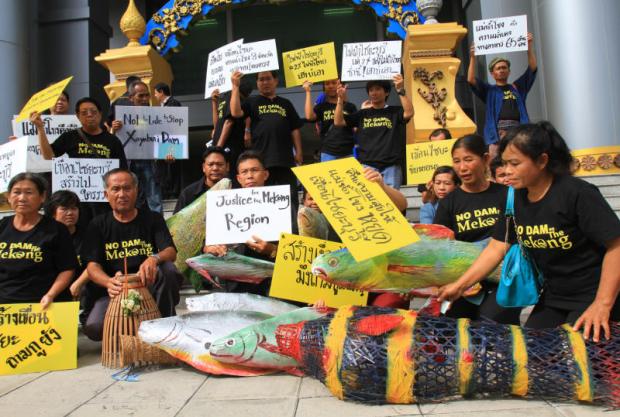 Plaintiffs from eight Thai provinces along the Mekong River, outside Bangkok's Administrative Court on Dec 25. 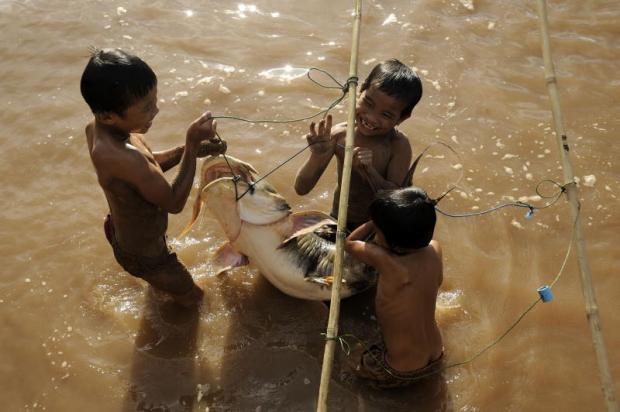 Lao children play in the Mekong.

How wondrous art is sometimes inspired by brutality

A virtual taste of heart and Seoul

The perils of Living a digital life