Throw out the cookbook

Bangkok has an endless supply of food that can both delight and surprise you. In addition to croissant taiyaki, cone pizza, cronuts and croffles, there are other extraordinary edibles that should pique your appetite and curiosity. To help you expand your horizons (and waistlines), we've scouted the city for eateries that serve food sprinkled with curiosity, from tom yum congee to green curry pizza. They are listed in no particular order. Bon appetit! 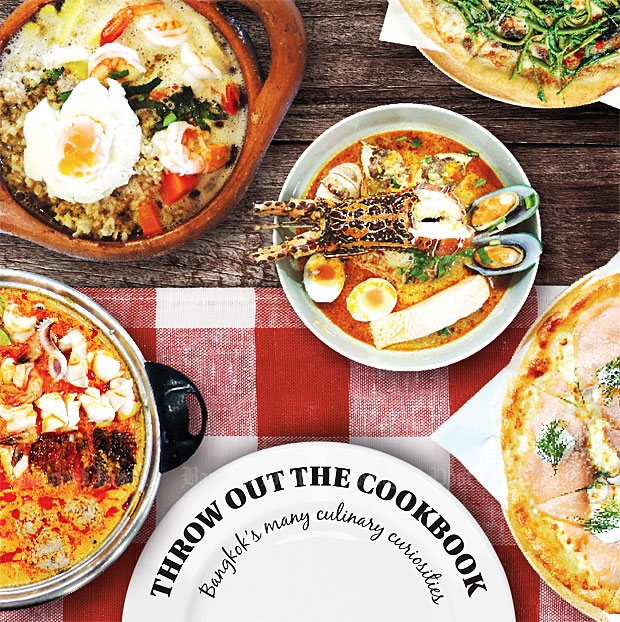 Congee, or jok in Thai, is a type of rice porridge served with pork balls and add-ons such as chopped ginger, egg or Chinese crullers. Boy and Lek put a new twist on the popular dish by allowing their customers to create their very own version of it. The couple and co-owners opened the first branch of Joke Perd Mor (5pm-midnight, http://goo.gl/qHe6JR) two years ago to serve up this new concept.

First, you choose from one out of possible six bases (B10-B15): gruel in original soup, tom yum or tom super (spicy and sour), or instant noodles in original soup, tom yum or tom super. Then choose from the 35 available toppings (B5-B129 each) to put atop it. Go lavish with river prawns or just plain weird with cheese or pig intestines. Congees are served in clay pots to ensure every spoonful is warm. If you don't want to stray too far from the norm, pre-selected recipes such as mixed seafood (B89) or mixed mushrooms (B49) are also available. A tick-off menu makes ordering easier. We dig the tom yum congee with river prawns and minced pork (B159). The lumpy rice goes surprisingly great with the spicy and sour broth.

There are currently 25 branches of Joke Perd Mor, which vary in term of setting and atmosphere. Do a Google search to find out which is nearest.

The 50-year-old Ran Jeh O (5:30pm-1am, 113 Charat Mueang Road, Pathumwan, http://fb.com/RanCeXow) is one busy Chinese shophouse restaurant. What draws a new crowd to this old name is its unique offering called Mama Oho Naruam (B800). This giant pot of instant noodles in tom yum soup is served with various toppings and meant for four to six people.

The dish started out as a late-night treat Hia Gao, the third-generation owner, made for his staff. After going viral on Instagram, it was included on the restaurant's 150-plus-item menu. It's not a simple matter of emptying tom yum flavouring out of its packet into boiling water, though. This tom yum soup is the real deal. It's tantalisingly spicy and sour, just as it should be, and the toppings -- chunky steamed crabmeat, juicy minced pork balls, sizeable shrimps and crispy pork with a delicious layer of fat -- are also delicious.

Ask for milder taste if you can't take too much spiciness. The dish is so popular that Asian tourists have visited the restaurant just to try it. The catch is that it can be ordered from 11pm only. Placing your order over the phone before arriving is always good idea. 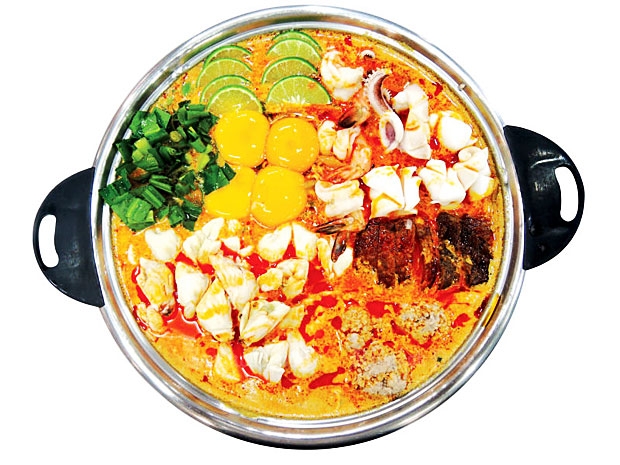 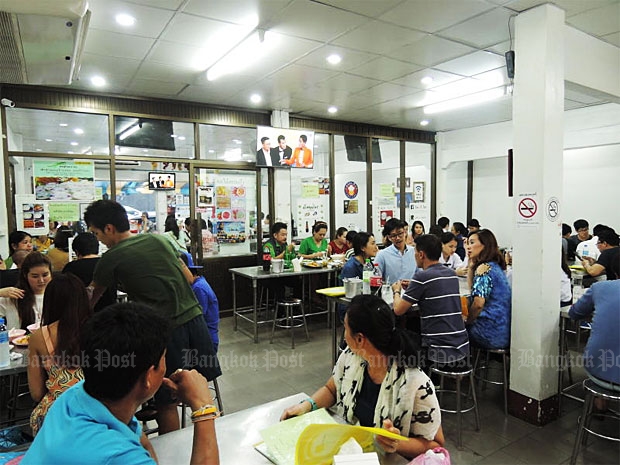 Masami Sushi (11am-11pm, G/F, Mille Malle, Sukhumvit Soi 20, http://fb.com/masamisushi) serves a variety of Japanese fusion dishes, but what perhaps stand out the most is its Lab ramen burgers (B160 for chicken or B180 for pork or beef). Chef Bank, with experience of working in restaurants in Miami, created this unique take on the traditional hamburger, which he claims to be original and unrelated to the ramen burgers first popularised by Keizo Shimamoto in 2013. 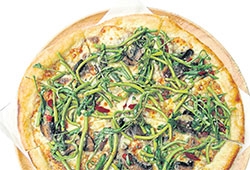 We followed the white rabbit with Alice's Pizza (11:30am-7pm, Phetburi Soi 47 Yaek 3-2, http://fb.com/alicesrusticseafood) and its Asian-style pizzas such as salmon with cha-om (climbing wattle) or chili sausage with nam phrik ong (a northern style of chilli dip).

Chef Gun, the owner and a Le Cordon Bleu Australia grad, used to run a full-scale restaurant before making the transition to full-fledged pizza delivery service last June. He also works as a senior executive chef at Bandara Resort Phuket.

Alice's pizzas are made in a wood-fired oven per order, so you should place your order at least 45 minutes in advance. But man are they worth the wait. Delivery charges depend on distance. And keep an eye out -- an Alice's Pizza food truck will soon be roadworthy. 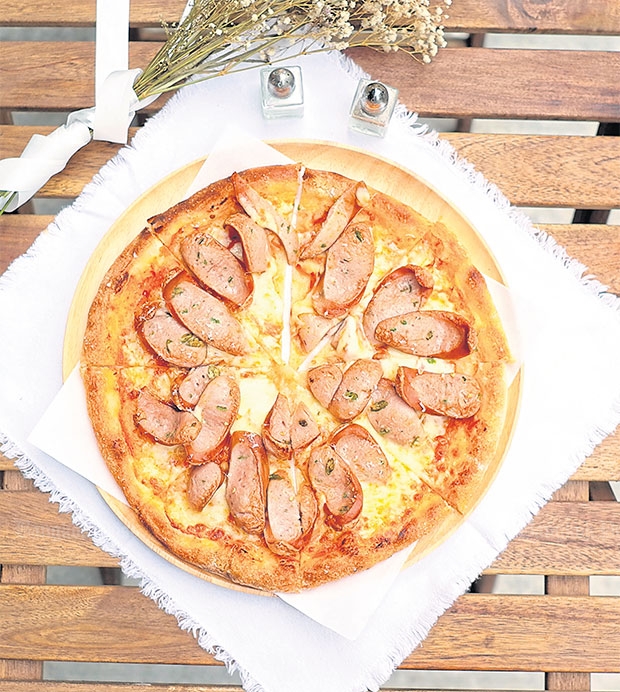 A shot of lobster tom yum kuay tiew from Ran Pee Or (10am-9pm, Tue-Sun, Phetchaburi Soi 5, 084-920-4776, http://goo.gl/ThBDEK) should surely get you many “wow” reactions on Facebook. Or, the owner, differentiates her shop, which nine years ago began as an average noodle shop, with fancy ingredients. Ran Peer Or now stands head and antennas above the rest, since seafood and other new toppings were made available two years ago. It has received the attention of foreign and local media and become somewhat of an attraction for Asian tourists, as well.

Her lobster tom yum noodles (from B699, depending on the lobster's weight) also come with mussels, salmon, egg and poo ja (deep-fried crabmeat and minced pork in a crab shell). You can also have your kuay tiew with a pricey piece of snow fish, should you want it.

The price range is very wide, fitting various budgets. If you want value for your baht, opt for a bowl of tom yum noodles with river prawns, squid, fish and mussels (B100). A normal bowl of noodles costs B50. Be warned, you may have to queue up for a seat on weekends. 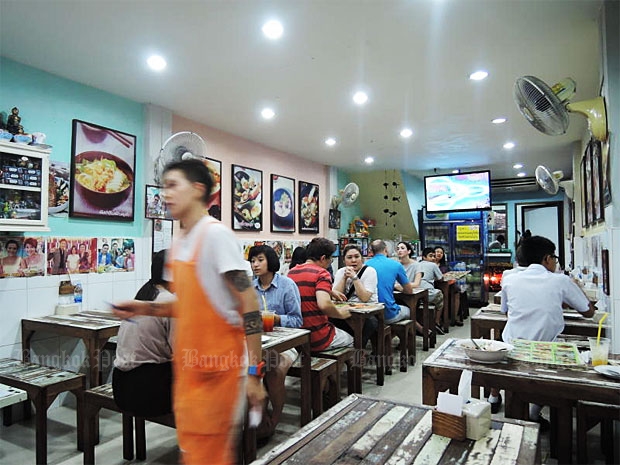 Xing Fu Kitchen (10am-10pm, Chan Soi 44, Chan Road, http://fb.com/Xingfukitchen9, 02-117-0561) offers both traditional and fusion Chinese food in a no-frills shophouse setting. Hia Pok, the restaurant's chef and owner, worked in various restaurants in Australia for many years before opening his own.

He combines a Thai-style omelette, rad na (fried noodles in gravy) and phad kaprao (stir-fried dishes with basil) into one dish called, well, stir-fried noodles with egg and basil sauce (B89). The resulting dish is very flavourful. The gravy resembles thicker version of your usual kaprao sauce. Pieces of marinated pork are tasty and sen yai noodles tender. Other curious dishes include Hong Kong-style roasted duck kaprao -- or the same dish, stir-fried with black peppers. 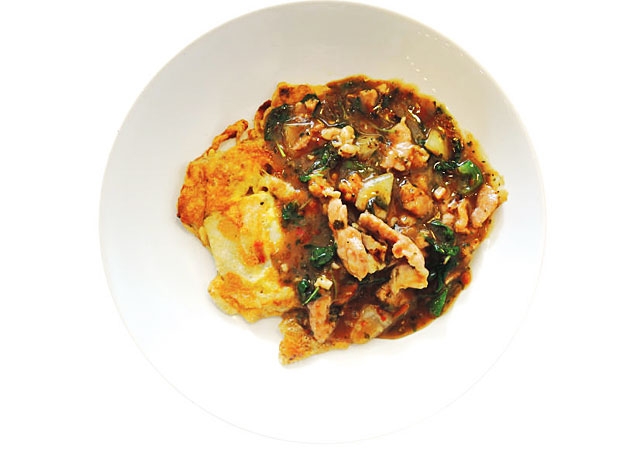 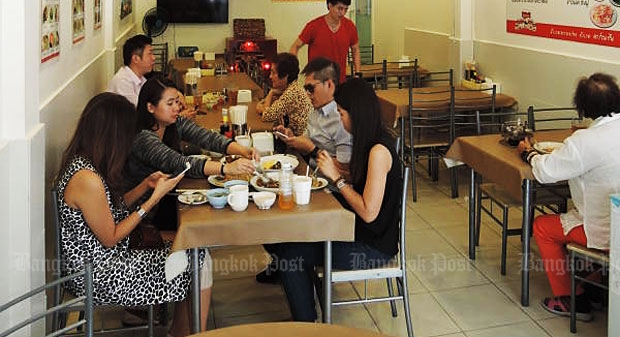 Inspired by Dominique Ansel Bakery's frozen s'more in SoHo, Jack, the sole owner of Snow Park Dessert, has created a new dessert. The result is something very sweet and cold, befitting a summer treat.

After much trial and error, Jack opened Snow Park Dessert in Suan Plern Market's (10am-9pm, Rama IV Road, http://fb.com/snow.park.dessert) food court, offering cubes of marshmallow-coated ice cream (B69). The dessert comes in three flavours -- green tea, vanilla and chocolate. After torching, the cube has a crusty and sugary exterior. You'll have to pass through the sticky and mushy marshmallow before reaching the creamy and rich scoop of ice cream in the centre. Also available is mochi ice cream (B39). 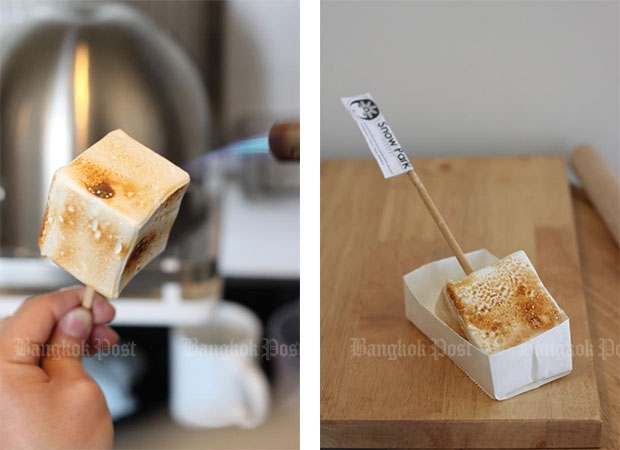 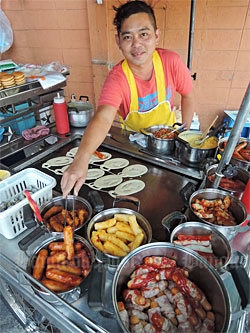 Khanom tokyo is a Thai street snack of thin crispy pancakes rolled around a sweet or savoury filling. To our best knowledge, its origin has nothing to do with Japan. Some say it was adapted from dorakayi first sold in Bangkok at the now-defunct Thai-Daimaru department store.

Your average khanom tokyo vendor has maybe four or five fillings to choose from, but Racha Khanom Tokyo (http://fb.com/tokyo2517) has 10 (B6-B18) in total, including chicken steak, bacon-wrapped sausage and fish sticks with cheese. It was founded by Phet more than 40 years ago. There are currently eight motorised Racha Kanom Tokyo carts rolling around Bangkok. Find exact locations by visiting the “About” tab on the vendor's Facebook page. 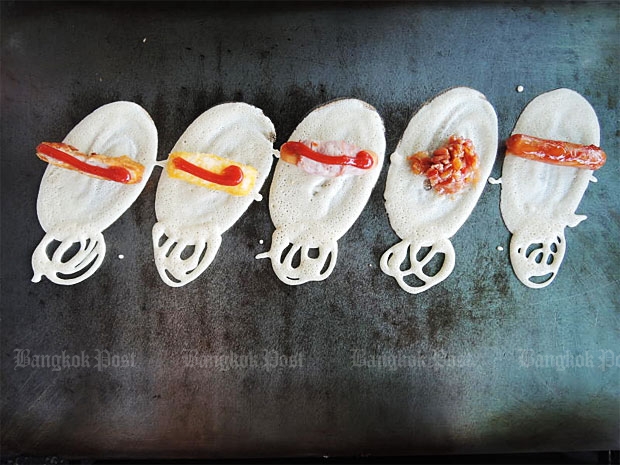