The man with the healing hands
Life
Social & Lifestyle

The man with the healing hands

At first sight, Sean Jordan radiates serenity, his calm persona becoming more evident when speaking. When asked about the long necklace worn over his tunic shirt, Jordan shared that the beads are made of bones, which remind him of impermanence, which is emphasised in Buddhism.

The British master therapist is a firm believer in spiritual practice and healing massages of which he stumbled upon when studying Buddhist philosophy in India.

"Medicine originated from spiritual practice, and people would go to practitioners and receive bodywork. I wanted to bring real healing through massage to everyone, not only to those who appreciate ancient therapies,'' said Jordan, who has created signature Journey Enhancement treatments for Eforea spas under Hilton Worldwide.

At the age of 19, Jordan actually quit engineering school in order to journey to India, where he first learned the ancient art of healing massages at a small community in the Himalayan Mountains. Then, he went to Taiwan to learn more about traditional Asian healing techniques.

"When I was a kid I liked to take things apart and put them back together. I always wanted to work with my hands. But I felt that as an engineer, I couldn't help people directly. As a therapist, I could still be a mechanician but for the body and on a deeper level,'' he said.

His prowess in both ancient and modern healing techniques makes him an in-demand therapist based in Cancun, Mexico. Training Eforea's therapists worldwide literally allows an extension of himself.

"I want to give massage to everyone but I only have two hands so being able to teach other people to do it, it's like an extension,'' said Jordan. "Therapists can be skillful in massage techniques. But if they are not connected with themselves, they don't have the healing hands.''

The Journey Enhancement treatments were created with the therapists in mind. Instead of being tiring physical work, performing a massage should be physically and spiritually fulfilling for the therapists, who are also giving to themselves, not only to the guests.

"Therapists need to be in a state of meditation when delivering a massage and feel the universal healing energy flowing through them. This requires deep breathing so when they press a point in the body, it's not for three seconds but for two breaths,'' he said. 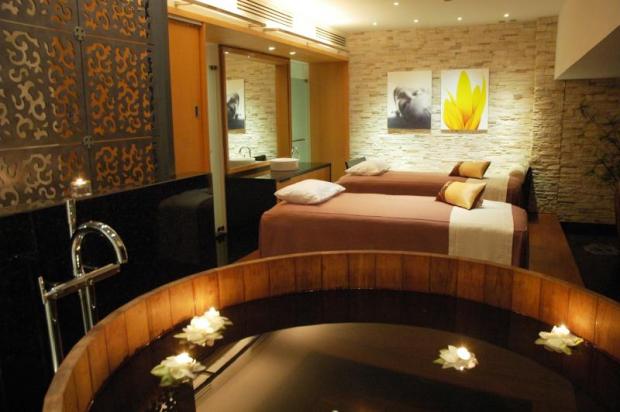 A treatment room at the revamped Eforea Spa.

Facials are normally offered in spas, but not head and face massages that tend to the eyes and ears.

"The head and face are one of the most important areas requiring massage,'' he said. "Naturally we rub our eyes when tired. Massaging the eyes is generally not carried out in spa treatments, whereas it is included in this Journey Enhancement treatment, which also spends time on massaging the ears, which according to traditional Chinese medicine, represents the whole body."

Ancient Indian and Thai therapies are combined for the head and face massage whereas a flow of Chinese acupressure, trigger point therapy and Swedish massage is used for shoulder, neck and scalp treatment.

"Taking around half an hour, the Journey Enhancements can be à la carte or added on to other Eforea treatments for a sense of deeper healing,'' he said. "The ancient techniques make an impact to promote wellness and a transformation."

The new treatments are a part of the refreshed spa menu at the Eforea Spa, at Millennium Hilton Bangkok on Charoen Nakhon Road, Klong San. Designed as wellness solutions, treatments offer more than just relaxation and promise a transformation, with this reflected in the spa logo, a butterfly.