A not so straightforward affair
Life
Social & Lifestyle

A not so straightforward affair

It was that time of year again when the Elle/Elle Men Fashion Week buzz hit town. The iconic white tent in front of CentralWorld may have been on hiatus, but the stylish crowd were in for new vibes this season, with Central Embassy playing as host venue. The P-shaped runway was a first and made each model's strutting ground less of a straightforward affair. Running from Friday to Sunday with a total of nine shows, pioneering names, popular favourites, as well as a retailer (Uniqlo!) stomped down this year's curiously angled catwalk to show their spring/summer collections.

Besides the established favourites, there was also a feature show where newbies made their inaugural mark in Elle's runway history. Saturday's Fresh Faces show saw Leisure Project, Q Design & Play, T and T and Janesuda taking the spotlight for the first time. Life gives you our full reportage of what went down at the capital's largest fashion gathering. 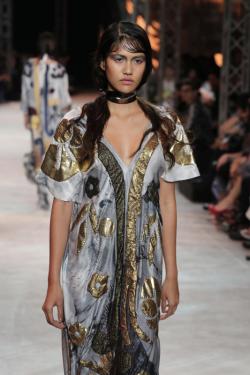 Luscious silk gowns are Nagara's formula. But this season, Nagara Sambandaraksa presented his staples in a clean, cool and unified fashion. The first part showcased a rich line-up of maxi kaftans replete with marbling abstraction with touches of gold and silver. The glistening Nagara's silk gleamed in triumph as a wearable art. The following set strolled out in sheer white sprinkled with silver Japanese blossom details. The modern and diverse silhouettes were of Oriental influences, most noticeably in the men's department seen in kimino robes and volumised samurai pants. Unconstricting yet glorious, the show sent in Aniporn "Natt" Chalermburanawong for the finale before the designer came out and took a selfie with his muse. 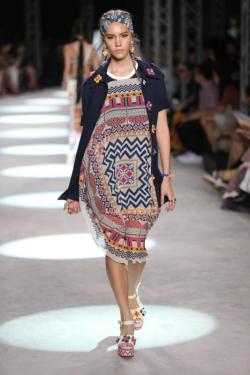 Bhubawit Kritpholnara is eternally mesmerised by eclectic cultures. This spring/summer, the director and head designer of Issue transported his celebrity crowd to a colourful exploration of the Peranakan, the Straits-born Chinese found in Indonesia, Singapore and Malaysia. Porcelain, patterns and facades turned up in the 47 looks of summer variety from boho off-shoulder dresses, laid-back loungewear, street-smart suits to sports-luxe jackets -- along with extras including personalised weekender bags and shades by Moo Piyasombatkul. With all hypnotic graphics, multi-hued patterns and audacious handwork causing a serious visual high, the show wowed show-goers more with an Instagram-worthy moment as a group of models whooshed on a one-wheeled scooter on the runway. 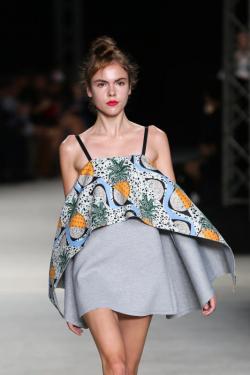 It was a show that ranged from feminine summer looks to dark, otherworldly shapes as Fresh Faces showcased an eclectic selection of designs from four (relatively) new brands. Starting off the show was T&T, bringing full-on summer vibes with their fun, bright and youthful designs. It was the strongest show of the bunch with loose and flowy tropical patterned outfits smoothly transitioning into elegant (yet still fun and beach-worthy) form hugging white lace dresses. Men's fashion label Leisure Project Store then quickly made the mood more sombre with their simple maritime-inspired collection featuring classic casual men's apparel with muted colours of white, black, beige and navy blue. Q Design and Play showcased their strong background in graphics design, with alien-like, silver-faced models strutting the runway wearing semi avant-garde jackets and kilts stitched with robot graphics. And last but not least, JaneSuda ended the show on a sweet note with a varied selection of feminine frills, sweet pastels and drifting floral and metallic dresses. Denim-heads would most likely be disappointed with Central United Shades of Denim. The show lasted less than seven minutes, showcasing around only 30 looks from preppy schoolgirl, hipster lumberjack, to double denim rocker-chic from multiple brands including AG Jeans, Citizens of Humanity, Envisu, Frame, Gas, G-Star Raw, J Brand and Paige. None of the outfits were labelled so it's hard to say which brand killed it most, but standout looks included a shiny black and red gradient overcoat paired with black skinny jeans. The saving grace of the show was a live performance by afro-haired singer Natt Buntita singing songs like Mercy by Duffy and Rehab and Valerie by Amy Winehouse and the final strut came from gorgeous Miss Thailand Universe, Aniporn Chalermburanawong, wearing a double denim outfit that seemed to come out straight from the 70s. 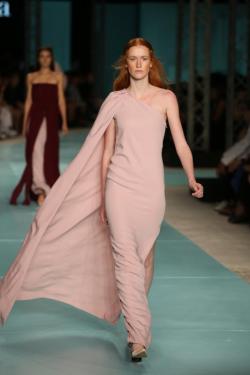 Though there was nothing fancy for Asava's Spring/Summer 2016 for both show and clothes, they didn't fail to deliver simpleness and elegance which is the brand's signature. This season, Asava was influenced by Audrey Hepburn in Breakfast At Tiffany's, which has brought the 60s and 70s style and reinterpreted it. Everything looked clean, it was plain, solid colours that featured in the collection like navy, grey white and black and special hues like emerald green, tiffany blue while the gorgeousness was reflected through silhouettes, from one-shoulder to cape blouse. Draping, wrapping, and colour and material blocking were used to add dynamism to the collection. The key looks LBD (Little Black Dress from the movie), which has been modernised, added a masculine touch. This is not a very colourful summer but the fabrics, which are satin crepe, matt crepe and duchess satin, seem perfect for the weather. Some dresses were decorated with lace and the metal-tipped bows which garnished the clothes were placed on sleeves and belt loops to help heighten the pieces while maintaining the classic touch. 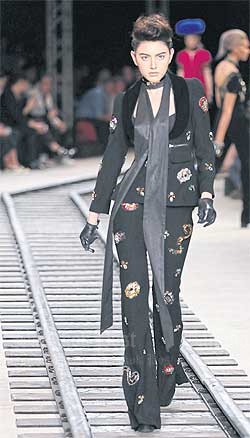 Anchavika's catwalk was decorated as a railway. The brand took this Spring/Summer into a real adventure with so many decorative details on the outfits. Most of the clothes are made of camouflage print fabric or a plain sombre tone but adorned with other dynamic materials that give the outfits a flamboyant look while some outfits played with flashy colour fabrics. The show opened with models in soldier-pattern or olive green clothes marching on the catwalk holding a flashlight or wearing headlamps and later developed to more luxurious styles where the sense of liveliness for this season was strongly shown. Gecko-shaped sequin was another main adornment that appeared in this collection. The type of clothes featuring in this collection are very varied, from playsuits, jackets, coats to dresses. 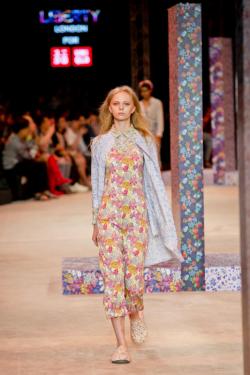 This is the answer to an improved Songkran styling, if you want to stick to the flower requisite. Uniqlo's collab collection with the century-old London department store Liberty has a dozen of tiny-flower prints all men, women and children can choose from. There's even some round, clog-shaped, soft slippers for wearing at home, amid the offering of tees, dresses, lounge pants, shirts and tank tops. We have to admit that H&M's collab with Liberty back in 2014 did better though -- with irresistible men's shirts sporting purple paisley. Even with a show mainly showcasing prints on prints, the colours are still sombre for men, but the women's line makes up for it. 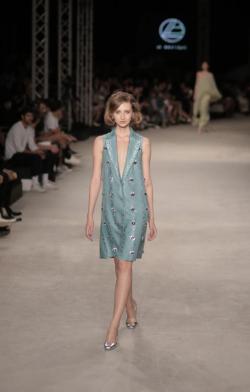 On La Boutique Airline, women only travel on First Class and in First Lady style. Before the show started, two air hostesses, complete with their food trolleys, served front-rowers swag packed in sleek, white boxes. (Don't fret non-A-listers, it was just water and cookies.) The theme and gimmicks may have overshadowed the clothes, which were strangely on the unadorned and un-splashy side for La Boutique's standard. Things are quite flat, with appliqués, embroidery and 3D fluffy stuff going on hiatus, although a few feathery hemlines are still available on long gowns. Still, with the details of 60s girlie glam -- Peter Pan collars, luxurious jumpsuits and no-frills pencil skirts -- Jackie O opulence, when she steps off a private jet, definitely comes to mind. 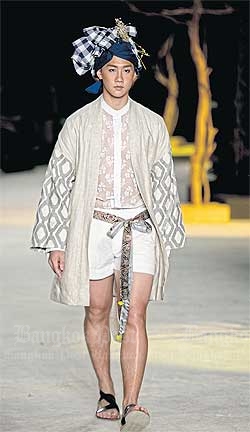 Mainly inspired by Turkish baths, you can count on the last show of the season to devote a solid first half to guys only in their undies, a turban with branches sticking out of them and a long robe. Even when the six-packed models got fully clothed in the second half, there's still no denying that robes are the heart of the collection. This is something to wear outdoors this summer -- their extensive robe collection includes both solid colours and patterns that look like Turkish tiles and marble. These robes are even worn on top of three-piece suits, since their light and breezy fabrics won't make it a suffocating affair. Yet, it would be a shame to cover this season's suits, as they all boast details of lace appliqués and eye-catching, dangling tassels.