Wat's the centre of Mon tradition

When celebrating Songkran, this community holds on to the old ways.

There are only three days left until Songkran, a festival that is celebrated throughout Thailand, but that is especially significant for the Mon community. The special importance it has for the Mon may have to do with the strictness of their Buddhist belief and the firmness with which they have maintained their cultural traditions. When Songkran arrives they celebrate it in a way that preserves the original character and meaning of the festival, creating an event that we can admire or, better, take part in. 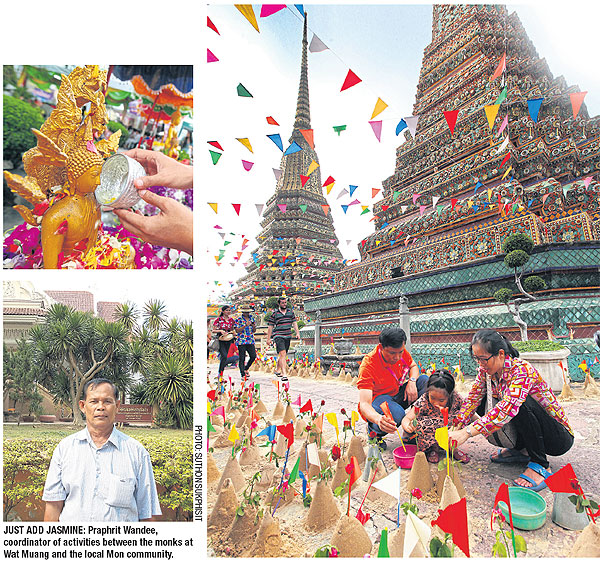 One of the special features of the Mon Songkran is a famous dish, khao chae, a food prepared as an offering to the female deity Nang Songkran on Songkran day. Although it was originally prepared as a Mon religious offering, khao chae has long spread beyond the Mon community and become an important item in Thailand's cuisine. From its traditional form it has diversified into khao chae chao wang (the royal version) and Phetchaburi-style khao chae among others, and now the arrival of Songkran is like a start-off shot for the dish as a hot-season favourite served in restaurants nationwide during the month of April, with all of its Mon cultural associations forgotten.

An excellent way to celebrate Songkran is to visit the Mon community on the bank of the Klong River at Amphoe Ban Pong in Ratchaburi. Its centre is Wat Muang. There are many Buddhist temples in the area, all of them Mon, but the community around Wat Muang, which dates back more than 350 years, is the oldest. There is evidence that the land where it is located was demarcated back in the Middle Ayutthaya Period. Perhaps the best person to explain the background of this Mon community is Praphrit Wandee, the coordinator of merit-making activities at Wat Muang between the monks there and the local residents.

"The Wat Muang Community has been very tightly knit for a long time," Mr Praphrit said. "Everyone can speak the Mon language. Children hear it spoken at home by their parents and relatives right from the time they are born. Outside the community they speak the Central Thai dialect, with Mon as a second language.

"The school at the wat follows the standard curriculum, but on Mondays, Wednesdays and Fridays the children are taught the Mon written language for an hour. Newly ordained monks must chant in both the Mon and Pali languages [Pali being the language in which monks throughout Thailand chant].

"On Songkran Day all Mon children and grandchildren who have gone off to work outside come back to make merit together with the community. This is a very old tradition, and it has never changed. Every family has certain things that it will be responsible for. Women will make the Songkran foods. Every family has to make a lot because there has to be some to offer to the monks, some to present as an offering to Nang Songkran, and some to offer to respected elder relatives and to the young people who return home for the festival.

"Men in the family are responsible for a building temporary shrine outside the house. Bamboo poles are hammered into the ground to make a square structure and then white cloth is wrapped around the outside. A sunshade is attached to one of the bamboo pillars and flowering branches are inserted into it. Before dawn on the festival day the Songkran food, or khao chae, is put in the shrine as an offering.

"The khao chae is eaten with yam mamuang [a sour-hot salad made from shredded unripe mango]. Dried snakehead fish is grilled and pounded together with dried chillies, shredded coconut, shallots, garlic, and kapi. When that is done chopped mango is added and mixed in. Then there is Chinese radish fried with seasonings to make it sweet and salty. The grilled snakehead fish is pounded fine and then some sugar is sprinkled over it together with some sen mee [the smallest-gauge rice noodles] fried with vegetables. For the rice, once it has been cooked it is put into cold water with jasmine flowers floating in it.

"Another way of eating the khao chae is with different dishes that are served in small bowls. These are set on a tray together with the rice and brought to the wat. Each kind of food is then put into a big basin, a different one for each dish. When the food is offered to the monks it is from these basins. The guests who come to the festival are happy to share in eating the khao chae, as there will be a lot of it and they don't want to see any of it go to waste.

"Foods of each kind are put on trays that are brought for the respected older relatives to enjoy. The young people who have come back to visit will be able to eat the khao chae at the same time as they do. In the afternoon everyone returns to the wat for chanting and to pour fragrant scented water over the Buddha image. Finally, the villagers sprinkle water through a special tube arrangement over all of the temple's monks, who sit inside of a square tent that has no roof, and there is a ceremony where fish are released into the river. This is how we celebrate Songkran.

"We live pretty much like villagers everywhere," Mr Praphrit added, "but where eating is concerned we have our own Mon food very often. It changes with the seasons. We use whatever vegetables become available during each season and prepare them Mon-style. For example, during the hot season there are a lot of marum ["drumstick" pods with woody shells] and we use them to make a kaeng som that is different from the usual kind. The marum are gathered when they are very young and tender, like long beans, and cooked together the blossoms of the plant and the tender leaves. For seasonings we use most of the usual ones, dried chillies, onions, garlic, lemon grass, makrood lime zest, and kapi, but instead of galangal which is used in other kinds of kaeng som we use krachaai and also put in fresh snakehead fish and coconut cream. Tamarind water, nam plaa and palm sugar are put in to flavour it.

"The curry we make from the bon plant [an aroid that has an irritating juice when raw] also uses a seasoning mixture that is our own. When we pound the paste we use peeled mung beans and add coconut cream, so it is very thick. We use the same seasonings for this dish, tamarind water, nam plaa and sugar."

These are only a few details of the traditional lifestyle that the Mon people have held on to so firmly. Their distinctive society, culture and traditions are on full display during Songkran, and visitors who would like to share them will be thankful for the experience.