If you can't stand the Songkran heat, complain loudly then follow these seven simple steps

When it's this hot and humid, Netflix and chill really does mean watching House of Cards with a cold drink in your hand and an ice pack on your neck. It's too sticky for anything else.

We're looking at a stiflingly hot month, one which the Meteorological Department is predicting will melt your ice-creams faster than last year's hellish summer when Sukhothai sweltered through 43.1C and Bangkok endured 39.8C. One forecast has tipped maximums to hit 43C or 44C in the North and Northeast this year, and the capital could reach the big 40 for the first time since recordings were recorded.

Suddenly the Arctic Circle is appealing. And while it looks spectacular (as we saw in last week's Brunch) it's the sort of trip that takes a bit of planning and money. Pencil it in for next year.

Songkran is just a few days away, but while we enjoy the chilling thrills of getting a bucket of icy water thrown down our backs as much as the next person, there's the mundane task of having to live with the heat before then.

Whether you're heading to the office, shopping before the holiday or just have to get out of the house because the power's gone out (the transformer at the end of the soi cannot last if everyone in the neighbourhood has the air-con on full blast), there is no way to avoid the heat forever. Here are seven options for keeping your cool over the next few weeks. 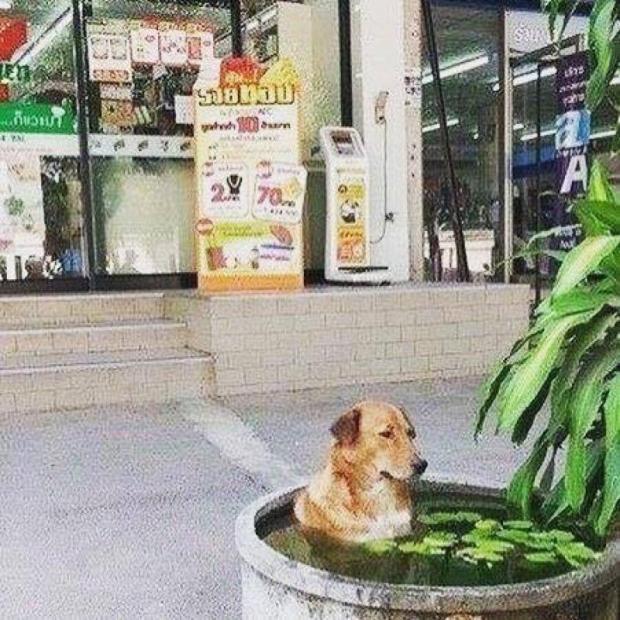 According to a recent unscientific survey based on a walk through Huai Khwang, there's a 7-Eleven or Family Mart for every 21.6 metres of pavement in Bangkok. Take advantage of this, the way a soi dog who wandered in to pant for a while might. Just try not to look too haggard and flea-bitten while doing so. Look as if you are hunting for a particular brand of ginko-infused UHT milk as you stand in front of the fridge dripping with sweat. Can't find it? All the more reason to walk into the next store of your convenience. 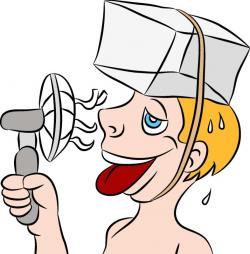 DESCENDANTS OF THE SUN

Have you ever seen those men walking around with the bottom of their T-shirts pulled up to their ribs, stomach bulging out, and think, now there's a look I should try? Well, now is as good a time as any. It's a unisex look -- unflattering on everyone -- which sets it apart from the toplessness favoured by men of a certain age and body shape on Beach Road in Pattaya. It's a look more suited to the crosswalk in Khao San than the catwalks of Milan, to be sure, but there must be excellent air flow to help regulate your body temperature. For the more modest among us, loose clothing also keeps you fairly well ventilated, and it's handy if you want to tuck a can of Coke under each armpit. 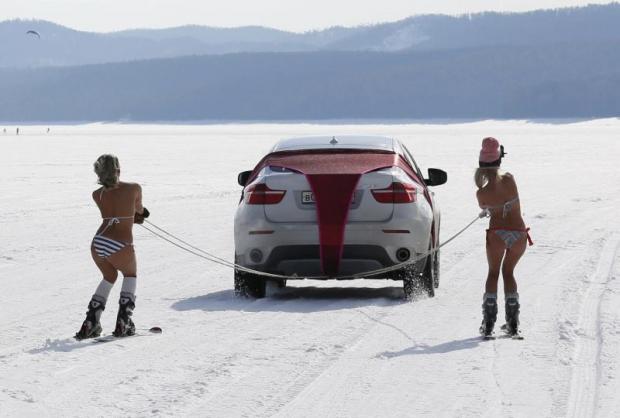 Sure, you'll have to fight your way through the annual Songkran exodus, but with three consecutive public holidays (Thai translation: 10 days off), staying put in the Bangkok furnace could get kind of lonely. But where to go? Fortunately, a satirical map that was circulated online the other week gives us a clue. Chiang Mai and Chiang Rai were among the provinces lumped together as "always cold". While the map deals in broad generalisations (calling Phuket "Pattaya 2" is pretty much right, right?) there's a chance it got this one wrong -- this weekend the temperatures seem set for the low 40s, hotter than Bangkok. So it might be worth looking further afield (we hear Siberia is lovely this time of year). 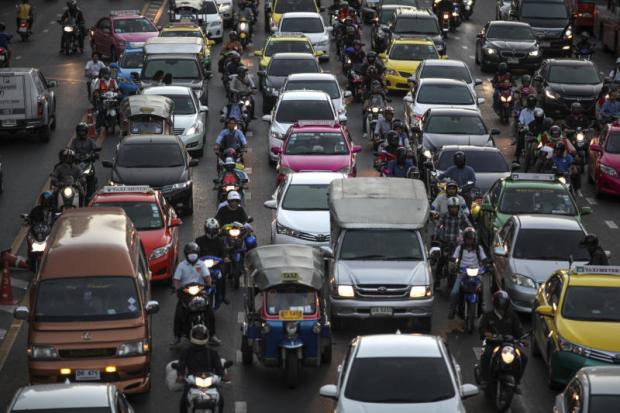 Could be worse: Being stuck in the traffic isn't the worst option, so long as you're in a car.

Suddenly being stuck in traffic doesn't seem like such a bad thing. There's air conditioning, music, a comfortable seat and if you're a taxi driver you can apparently watch TV and play on two smartphones at the same time without fear of fines. There's really no need to rush at this time of year -- the sooner you get anywhere, the sooner you have to step outside into the fan-forced oven of the city. Some of the more comfortable people movers about town are kitted out with decent sized fridges, but while it's a good idea to stay hydrated there's a downside to drinking too much in the car. You can't stay there all day. 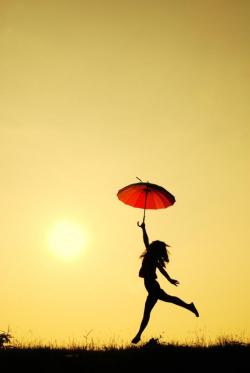 STAND UNDER YOUR UMBRELLA

Wandering around Yangon a couple of years ago, when Thailand had democracy and Myanmar didn't, it was interesting to see so many couples walking around Kandawgyi Lake under parasols. There was something romantic about the sight, which was both quaint and yet entirely sensible at the same time. It's odd that umbrellas aren't put to better use here, although every now and then a brolly will go up in defiance of the harsh rays from the sun. Come to think of it, it's probably the best way to use them, given how useless they are in a thunderstorm when the rain attacks from almost every direction. They can be seen hovering above the heads of young women ducking out for lunch in the middle of the day, although there are suspicions this is partly out of fear of getting a tan. For men? Forget it. To make an umbrella attractive for the manliest men, it would need to be black and chrome, come equipped with high-powered fans on each corner, and come to think of it would need to have wheels, a seat and a drink holder. 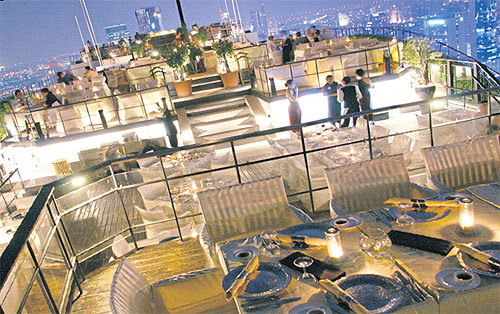 UP, UP AND AWAY

It might seem counter-intuitive to want to beat the heat by getting closer to the sun, but rooftop bars are not a bad option once dusk has settled. Get there too early, however, and you might feel like a kai dao sizzling on the side of a building. Away from all the traffic and the radiant heat from the concrete and asphalt, sky bars that are Above Eleven and likely to give you Vertigo are typically several degrees cooler than those at ground level. 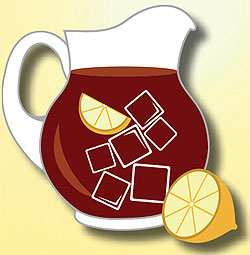 Think only hipster bars have steady supplies of funky-looking ice globes at their disposal? Think again -- you can have a freezer full of ice balls at home. Go to Daiso, spend 60 baht on an ice-ball tray (120 baht for two if you're feeling flush) and make enough to fill a bucket. These won't be the smooth, crystal clear ice balls the Japanese machines costing thousands of baht produce, but they are large and keep their cool for a while. Good for both impressing guests and for those of us too lazy to return to the freeze every time a couple of tiny ice cubes melt. Those who need their daily shot of coffee can use the standard ice trays to freeze espresso cubes. We first saw the idea at Roast a while back, and have since seen Thai milk tea versions around. Brunch did try this at home, and it works. Don't be afraid to store a couple of glasses in the freezer, and a bottle of vodka probably wouldn't go astray. Might come in handy when watching House of Cards. 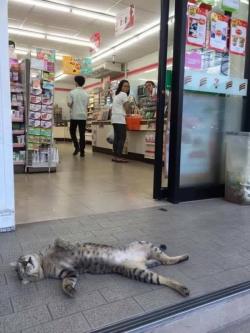 Cat door: Why not follow the animals and treat convenience stores as personal air conditioners?