Discover the hidden stories behind your favourite Thai dishes

There's no question that Thai food is among the most popular cuisines in the world. But have you ever wondered how these palatable dishes of our pride and joy came into being?

We've dug up some tasty tidbits behind some of your favourite Thai dishes, some tasty weekend food for thought to mull over. And boy, what we've discovered is quite mind-boggling i.e. Phad Thai was about politics, American fried rice resulted from a cancelled flight and Som tum may have never been here if it weren't for farangs.

Have we whetted your appetite yet? Here's a helping of fascinating stories and theories you may not have known about famous Thai dishes. 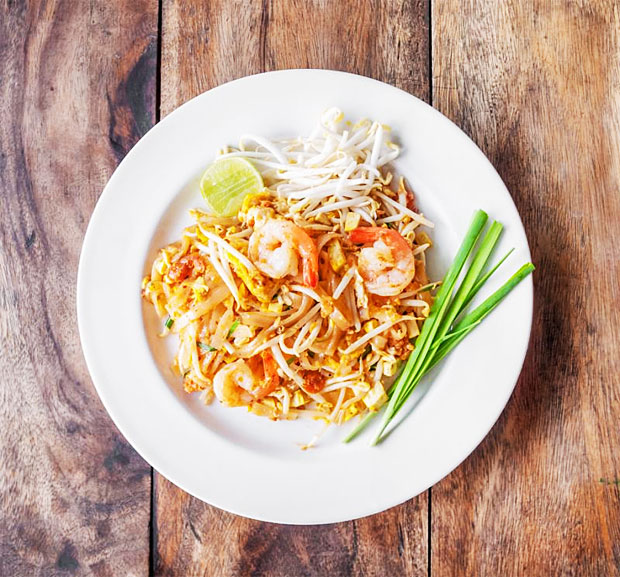 You may be able to list the key ingredients of Phad Thai but we bet you don't know that its secret ingredient is a healthy sprinkle of nationalism. This Thai dish, which has Chinese influences might we add, was invented during the government of Plaek Phibunsongkhram, Thailand's third prime minister, as part of his nation-building campaign.

Plaek already changed the country's name from Siam to Thailand so a dish to embody Thainess seemed to be in order. Chinese-style stir-fried noodles, or kuay tiew phad in Thai, had already existed before but it was Thai-ified to become Kuay tiew phad Thai, later shortened to just Phad Thai, with some tweaks such as the use of dried shrimp instead of pork (as it's considered Chinese) and the use of quintessential Thai ingredients like bean sprouts and garlic leaves. Plaek even ordered the Public Relations Department to distribute Phad Thai recipes to the public.

Perhaps Prime Minister Prayut Chan-o-cha may want to take a cue from him and come up with another national dish to unite Thailand? 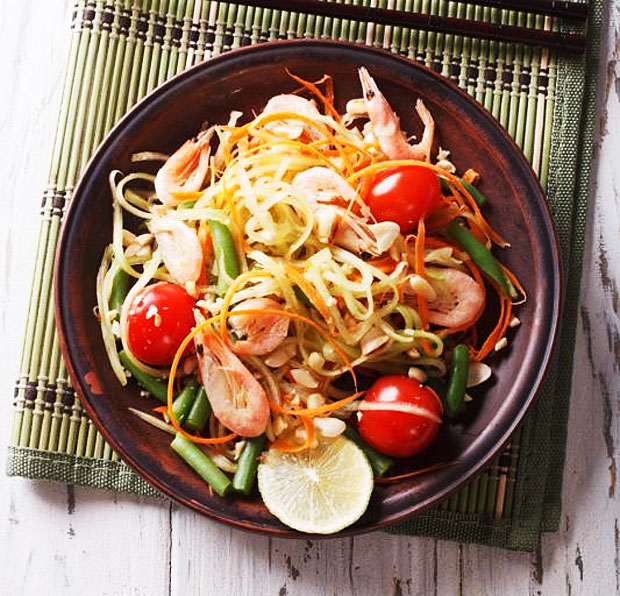 Can you imagine life without Som tum? Our Thai ancestors lived one as chilli and papaya, two of som tum's key ingredients, apparently aren't from around here.

Professor Suree Bhumibhamon explained the long journey of chilli pepper to Siam in his book called Phan Pued Nai PrawatsartThai. Christopher Columbus' “discovery” of the Americas (we won't get into this controversy), where chilli pepper was a native, led to its spreading in other parts of the world. It was first grown in Spain around 1553. Seven years later, Spanish and Portuguese navigators brought the fiery pod to India where it was embraced by the local cuisine. From that point on, chilli found its way into SEA countries, including Siam.

Papaya was likely to have first arrived here even later, according to Suree. In the same book, he cited several possibilities from the Andes to Mexico as papaya's place of origin and credited the Portuguese and Spaniards for bringing the fruit to SEA. Around 1591, when Thon Buri was the capital, a Dutch traveller reported that the Portuguese brought papaya to Siam and several other Asian countries. It has been surmised that papaya started spreading into Thailand from the south or the Gulf of Thailand. 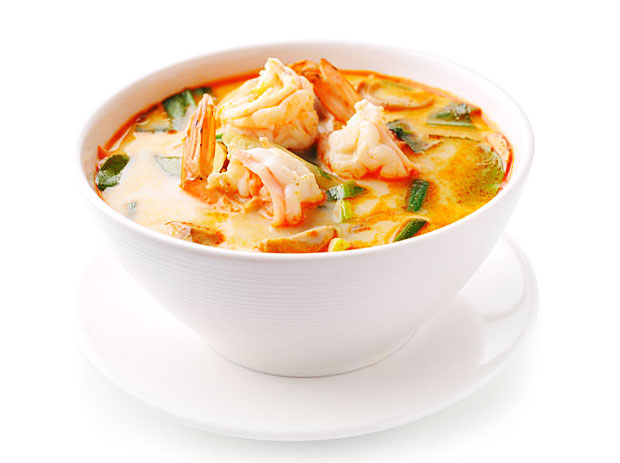 By now, you probably have consumed gallons of Tom yum goong or spicy and sour soup with shrimp. However, its recipe may not be as ancient as you may think as several accounts of it appeared in the Rattanakosin Era, Thailand's current period, which started in 1782.

Kanit Muntarbhorn, food historian and physician, said the written recipe of Tom yum was found in one of Thailand's earliest cookbooks Patinnabutr Lae Jod Mai Het, written by Somjeen. It was published in 1889 in the reign of King Rama V. Originally, it wasn't Tom yum goong either, but Tom yum pla.

Another account claims that Tom yum goong had a lighter consistency in the beginning, not containing coconut cream, Nam prik phao (chilli sauce) or milk. A Chinese restaurant in Sam Yan during the reign of King Rama VI was said to add coconut cream to bring the dish down a bit on the Scoville scale.

Should we try it with white sauce? 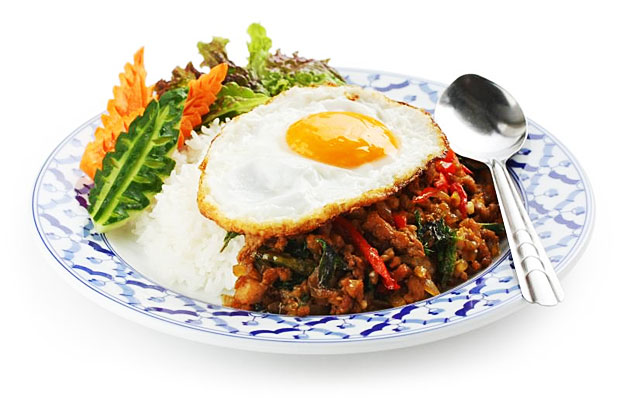 It turns out Phad kaphrao is half-Chinese, kinda.

According to Prayoon, the holy basil leaves had already been long used in spicy soups or other dishes in Thai cuisine. Chinese living in Thailand were said to have first created the fiery stir-fried dish we know today as Phad kaphrao by incorporating the basil leaves with chilli, meat, garlic and black soy sauce.

Fermented soy beans were used in the dish's earlier recipes but later dropped. Mixing oyster sauce in Phad kaphrao was unheard of back then. Yard long beans, carrots, corn and onions weren't on the list of ingredients either. 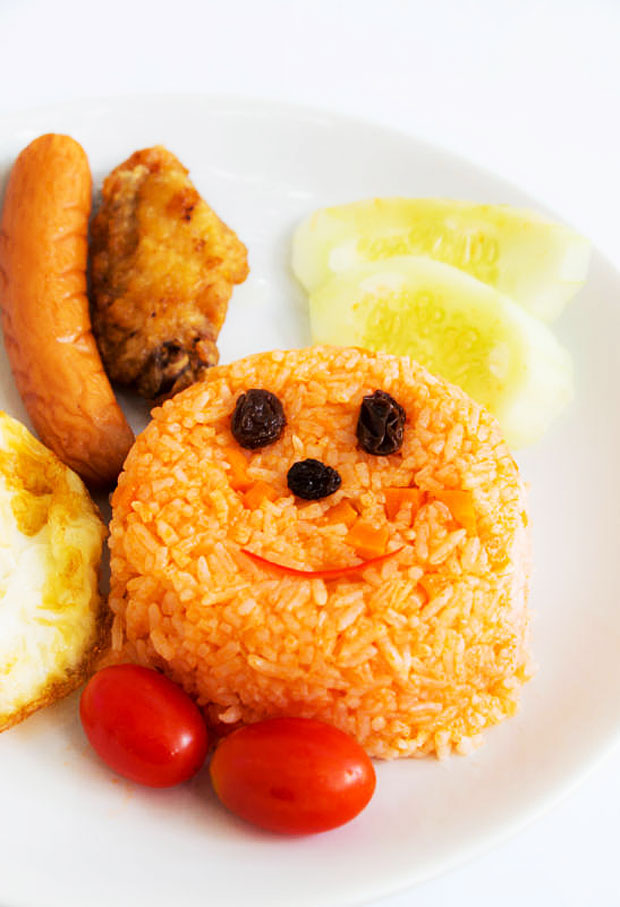 We may have a fatefully cancelled flight to thank, for, without it, we would never have known the joy of eating ketchup-coated fried rice in Khao phad American.

Khunying Sureepan Maneewat, who's also a novelist, said in an interview with Sakun Thai magazine that she created this hybrid American fried rice herself. She recalled an airline had ordered breakfast and lunch from a restaurant in Don Mueang Airport where she worked as a manager. But its flight then got cancelled, resulting in many unused sausages and sunny side up eggs.

She decided to combine fried rice and American breakfast in one dish which she ate herself. Serendipitously, an American soldier saw it and asked for its name so she aptly christened it American fried rice. The dish was said to be invented before 1954 since it was the year she quit the restaurant to further her studies in England.

There's another theory that has been floating around. This version credited a cook nicknamed “Go Jek” who created the dish for American soldiers who were stationed in Udon Thani and Korat during the Vietnam War. 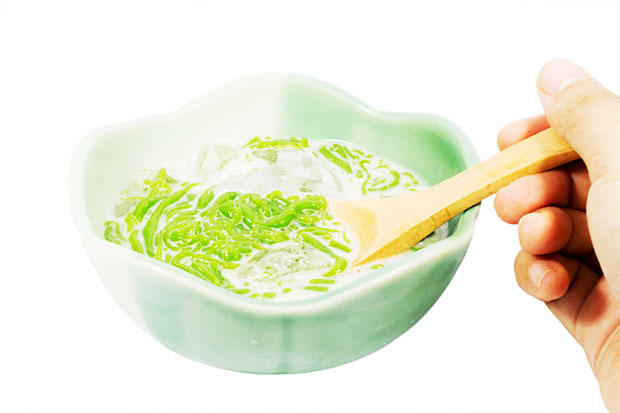 Cendol, jelly-like green worms with ice and coconut milk, is a popular drinkable dessert in SEA. It is called Lod chong Singapore in Thai, but why?

According to an episode of TalonGin TV, a shop in Yaowarat called Singapore Pochana first popularised the dessert in Thailand in 1961. Lod chong (through holes) refers to how the rice flour mixture passes through a filter, resulting in those worm-shaped green thingies.

Lod chong was the Krispy Kreme of its time and people flocked to the shop to try this novelty. People then started to shorten “Lod chong at Singapore Pochana” to just “Lod chong Singapore” and the latter stuck, causing some to think that it was originally from the Land of Merlion. 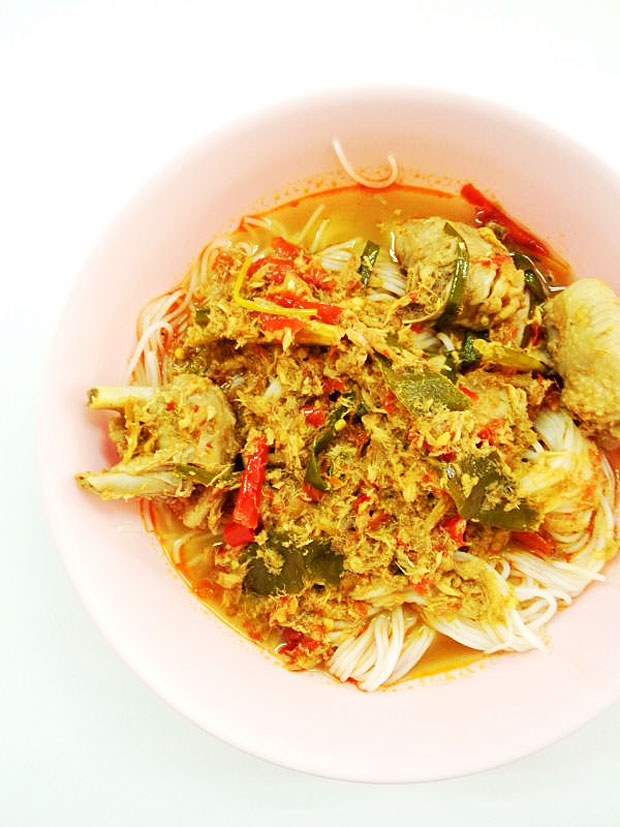 Slip of the Tongue

Why do we call fermented rice noodles Khanom jeen when it literally translates to Chinese dessert? We've never seen anyone in the office snack away at it in the afternoon. More importantly, it's eaten as a carb base with various types of curries. That's hardly khanom, is it?

Well, this turns out to be a case of a slip of the tongue that got repeated enough that it became legit. Professor Bumrung Kham-ek broke the confusion down in an article published by Silpa Wattanatham magazine in 2003. He explained that Kanom jeen is likely to be of Mon origin and its Thai name has been deviated from the original Khon om jin. You see, Khon om is what the noodle is called in Mon language while jin is Mon for “cooked”.

We advise against using its true name with your Khanom jeen vendor though. They may think you're talking gibberish. 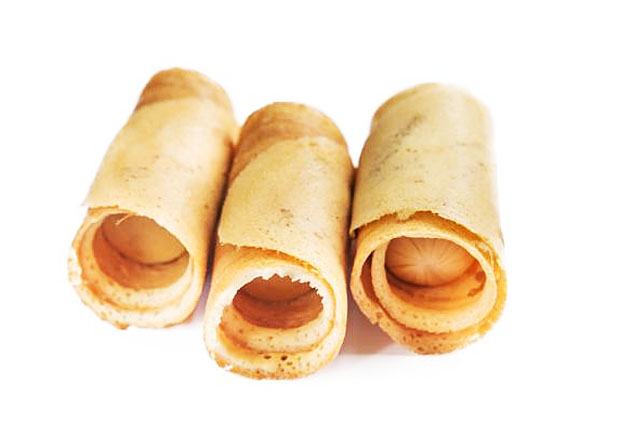 Another food item with a misleading name is a street snack called Khanom tokyo. It's actually Bangkok-born and nope, you won't find it in Tokyo. The rolled-up flat pancake with sweet or savoury filling inside is the youngest of dishes on our list. And, apparently its name is a nod to its Japanese inspiration.

Khanom tokyo's origin is attributed to the opening of the Thai-Daimaru department store near Ratchaprasong intersection in 1964. The Japanese-style mall was the first mall to have an escalator in Thailand. A Japanese treat called dorayaki, which was first sold in Thailand there, is said to be the inspiration for the Thai street snack.

This isn't so far-fetched since dorayaki is basically two small pancakes sandwiching red bean paste while Khanom tokyo is the same concept but rolled up and made with only one pancake.

We have pretty much made it our own since then with so many choices of fillings from pandan cream, quail egg, minced pork to sausage. If you want to go savoury, don't forget to ask your vendor to add white pepper and seasoning sauce for good measure. Yum!