Spinning a living from a dyeing art
Life
Social & Lifestyle

Spinning a living from a dyeing art

From the dawn of Jim Thompson's empire to the sunset of the industry, Manasnan Benjarongchinda has seen it all in 63 years in the silk trade

Manasnan Benjarongchinda is a reminder of the glorious past of Ban Krua Nua, when the historical Muslim community in the centre of Bangkok was full of vibrant silk.

The 76-year-old man has seen much change in his community, from the birth of Jim Thompson's silk empire to the sunset of the homespun industry as weavers have become rare.

Despite the ups and downs, Mr Manasnan has never stopped producing elegant fabrics for his customers. After 63 years of making silk, he could not even hazard a guess as to how many yards he had sold. "I don't know. It must be very long."

Today, Mr Manasnan is one of two remaining Ban Krua Nua silk weavers who once supplied their home-made fabrics to Jim Thompson in the early days of the 1950s and '60s. The other remaining supplier is Phai Mai Ban Krua, which is now run by the descendant of the original weaver.

A male worker dyes silk thread in a vat, fuelled by charcoal. A middle-aged woman weaves silk with a loom in one corner. A spinner's weasel stands idle on the opposite side.

"We do everything from here, from weaving to dyeing silk," Mr Manasnan boasted.

Now, Mr Manasnan has only two workers: one for operating the loom and one for the dyeing vat. They don't work every day but come whenever Mr Manasnan receives an order. In the prime of his business, Mr Manasnan had more than 20 workers covering three shifts.

"Saen Saeb Canal was once full of colourful silk threads hanging along the canal-side footpath."

Today, he hangs silk yarn out to dry on bolts upstairs. "I cannot dry the yarn outside any more. It would be too tempting for thieves to steal my silk," he said.

In contrast to the old community's shabby and rundown appearance, across the pedestrian bridge stands Jim Thompson House, now a museum for international tourists who are fascinated by the mysterious American whose name become synonymous with Thai silk.

WEAVE GOT A JOB FOR YOU

Born in 1940, Mr Manasnan became a silk weaving apprentice at the age of 13. Unlike most people born and raised in Ban Krua Nua at that time, he is Buddhist, and became involved in the trade through a friend. 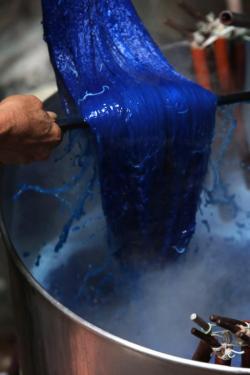 "One day, I was running around Ban Krua and a friend asked if I could help him dyeing silk."

Ban Krua Nua had long been a silk weaving community, since Cham Muslims migrated from Cambodia and Laos in the reign of King Rama I and brought their expertise with them.

Thompson, an American OSS officer who went missing in mysterious circumstances in 1967, came across Ban Krua Nua when Mr Manasnan was still a boy.

According to Mr Manasnan, Thompson accidentally found the community while riding a boat along the canal to explore Bangkok.

Back then, silk weaving in Ban Krua Nua was still a cottage industry. "People used water from the canal to dye silk by natural colours. There were only three colours, using wood, brick and betel nut," he said.

"Sometime, we accidentally dropped silk yarns in the canal and we had to jump in to get them."

The water was clearer and cleaner back then, he added, and locals could even catch fish by throwing a net in the canal.

Fascinated by the craft, the American set up the Jim Thompson Silk Company in the late 1940s. Thompson rebooted the silk industry by helping local villagers modernise their weaving and dyeing techniques to match the taste of Americans.

When Thompson was still around, he would cross the canal by boat and chat with his silk suppliers at 9am every day.

"He asked how we were doing. Sometimes he placed orders and checked the quality of our silks," Mr Manasnan said.

Mr Manasnan went to work after finishing primary school, and would get to know Thompson as a handful of Ban Krua Nua families supplied silk to his company in the early 1950s.

"It was a natural choice. I could earn good money from making silk," Mr Manasnan said.

Jim Thompson Silk Company's fabrics graced international fashion magazines and became the most recognisable silk brand from Thailand. In 1956, Jim Thompson's silk was featured in the movie The King and I.

"He is a good person. He advised us on silk colours and design," Mr Manasnan said of Thompson.

Thanks to Thompson's fame, Ban Krua Nua was also in the spotlight. When US attorney-general Robert F Kennedy visited Thailand in 1962, he also dropped by the community.

"I remember back then, the two-panel wooden pedestrian bridge was replaced with five-panel wooden bridge for the visit of president Kennedy's brother."

When Thompson disappeared in Malaysia in 1967, people in Ban Krua Nua were shocked. "We did not know the market. We did not know where to sell our silk," he said.

"The people of Ban Krua were abandoned."

"Many silk weavers left the business because they could not find a market and subsequently migrated from Ban Krua to other districts.

"I was also thinking whether I should change from silk weaving and do something else."

But an Indian customer from Surat Thani came to Ban Krua Nua and placed a large order, and went on to sell the silk in Silom.

Although the customer left long ago, Mr Manasnan has found a niche in the market and been able to sustain his business.

"The quality of my silk is similar to that of Jim Thompson. The only difference is our price is much cheaper."

The income is enough to make ends meet, even though the current economic doldrums have dented his business.

Mr Manasnan looks stronger than most people his age. A straight-talker, the old man is used to welcoming strangers to his house.

Tourists often pop up without advance notice. Schools and colleges often bring their students to visit his workshop to study silk production.

A photograph of him with Jim Thompson is on display inside the house. There are also photographs of him with celebrities who have visited.

To dye silk thread, he boils water before putting the yarn in a vat, adding two spoons of soda ash and two bars of soap.

The other ingredients are acid, salt, alkali and paraffin to make the silk surface glossy.

He said the old weaving technique makes the texture and lustre of Thai silk unique. By using one main colour and others for the weft or crosswise threats, the finished fabric reflects different shades at different angles.

Mr Manasnan does not have a mission to preserve the silk weaving tradition, but said he still does it out of love.

"I will continue doing it as long as the customers want my silk," he said. 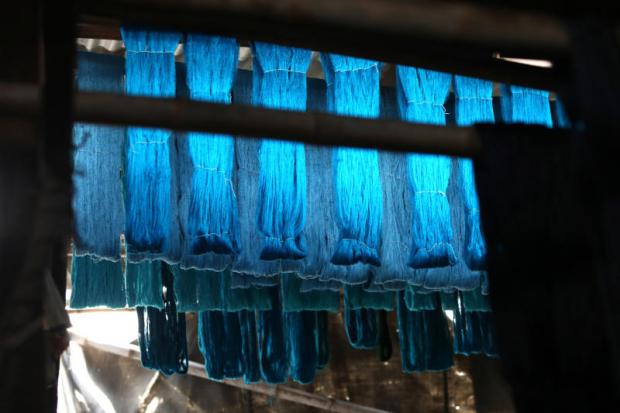 By a thread: Manasnan Benjarongchinda's silk workshop in Ban Krua Nua once employed 20 people, but now has two staff members for dyeing and weaving. 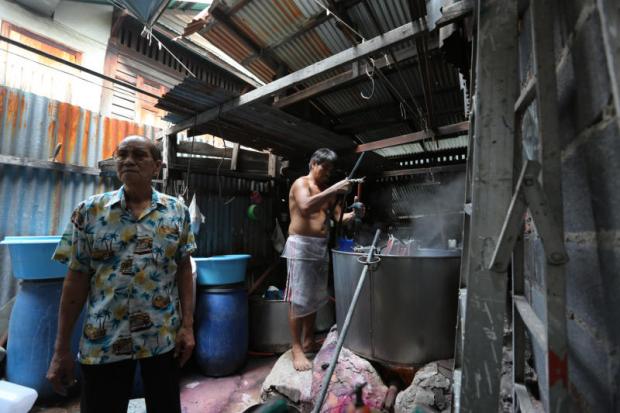 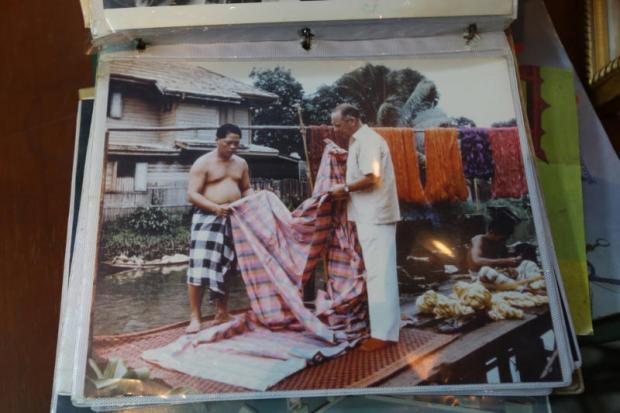 Having a yarn: Young Manasnan works to the right of Jim Thompson. 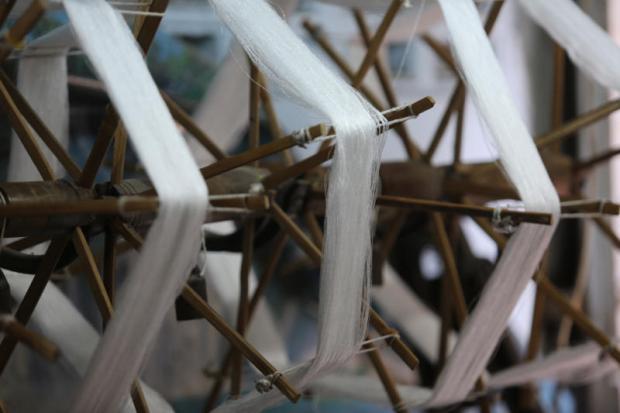 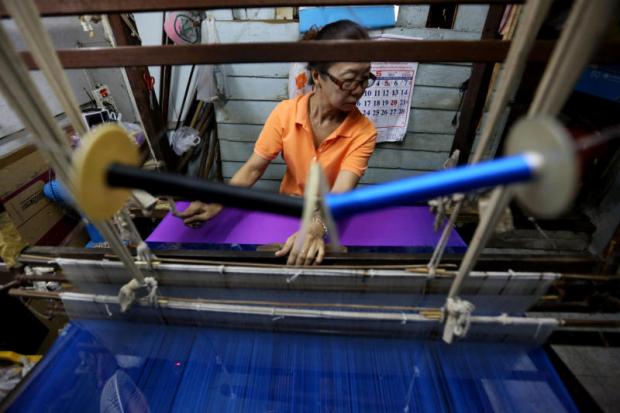 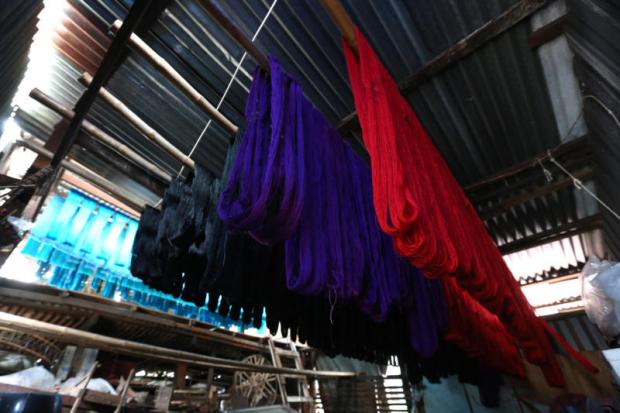 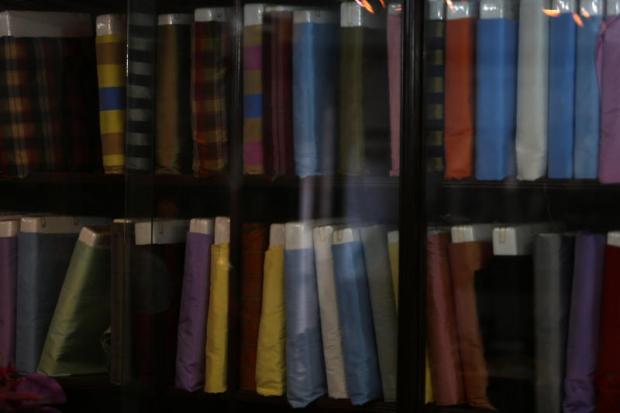 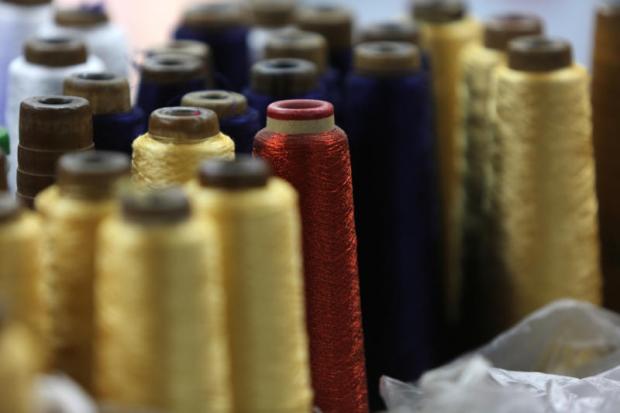 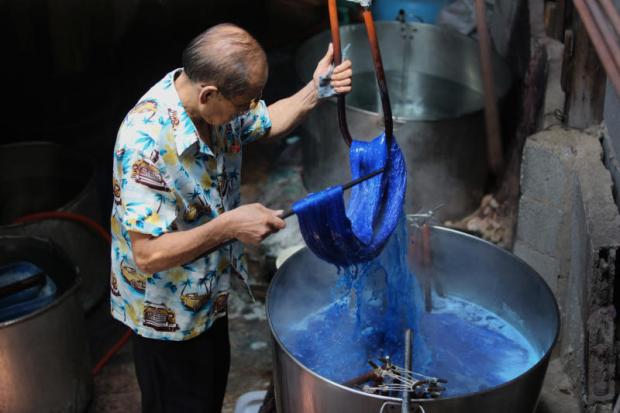