The troubling response of the army commander to a rather benign political campaign promise has quickly escalated. Gen Apirat Kongsompong didn't just try to refute the call to cut both the military budget and the number of general officers. He retaliated by reviving the most hateful song in Thai political history, and promised to flood military bases and the airwaves with it. It is a move with an ironclad guarantee of major political and national division.

The massive overreaction by Gen Apirat followed, of all things, a Facebook post by key Pheu Thai Party member Khunying Sudarat Keyuraphan. She is one of three candidates as prime minister put forward by her party. Khunying Sudarat proposed that, if it leads the post-election government, Pheu Thai would cut the military budget by 10%, around 20 billion baht. Her post claimed the money could be channelled to "30,000 young entrepreneurs to build their [startup] businesses".

Party stalwart Watana Muangsook then took to Twitter. In addition to military budget cuts, he wrote, a Pheu Thai government would cut the "excessive number of generals". This is one of the oldest military-civilian disputes, but well taken. The Royal Thai Armed Forces have one of the largest ratios of general officers-to-troops in the world.

The two proposals are hardly new. In addition to being heard for decades, they had already been put into the current election campaign by the Future Forward Party. It has gone even further, promising if elected to end all conscription. That popular promise has riled military leaders. Prime Minister Prayut Chan-o-cha said on Monday he believes the military draft is "the duty of all Thai men". Legally, he is correct. The ethics of drafting forced labour without a war or national emergency are another matter.

What was hugely disappointing and inappropriate was Gen Apirat's instant and ill-formed leap into the political campaign. The decision of the highest ranking army officer to step into the election debate was questionable. What is indefensible is his order to revive and propagandise his soldiers with the noxious and odious 1970s song Nak Phandin. His order for the song to be played on the military airwaves has been reversed. But the song has continued to be broadcast inside military compounds.

The song has already been misused by the military with tragic results and it is startling that Gen Apirat is even praising it, let alone ordering it used as some sort of rallying anthem.

One interpretation of the meaning of Nak Phandin is "Worthless", but the song title has been more accurately translated as "Burden on the Land" and "Scum of the Earth". The title was supposedly meant to refer to communists when the country faced a threat from the Chinese-supported Communist Party of Thailand. From its inception, however, it was used incessantly against democrats and leftists who ousted the military dictatorship on October 14, 1973.

But almost as soon as it was recorded, Nak Phandin took on a sinister, more divisive meaning. Almost immediately after it became a mainstream song, the army and right-wing groups of that time used it against democrats and revolutionaries who overthrew the military dictatorship in the Oct 14 movement. Democracy and freedom flourished, and so did the use of the song. It was an anthem of the vicious and murderous attackers and killers of the Oct 6, 1976, massacre at Thammasat University that brought democracy to a halt. 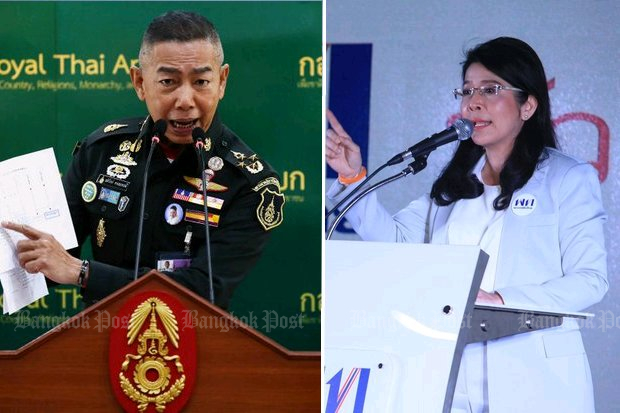 The initial clash: Prime minister candidate Khunying Sudarat Keyuraphan (right) said a Pheu Thai government would cut military spending and the bloated corps of general officers. Army commander Gen Apirat Kongsompong hit back with the old suggestion that those who critique the army are 'Scum of the Earth'. (File photos)

Gen Apirat, a prominent Thai citizen, is both entitled and qualified to state his political opinions. His opposition to Pheu Thai's proposals should be heard. But he needs to turn off Nak Phandin at the military bases. Far from encouraging patriotism, it specifically aims to divide and encourage violence.

How to save country when it's broke

Where did we go wrong in the battle against Covid?