Darkest-day song nothing to be proud of
Opinion

Darkest-day song nothing to be proud of

Chumpol Thummai of Nakhon Pathom prays at the gate where his brother was seized in October, 1976, and hanged by extreme right wing police and Village Scouts in a massacre, egged on by the song Nak Phandin. (AFP photo)

Many people may love the song and call it patriotic. But for a person like me and many others who are old enough to have witnessed the horrors of the "October 6" massacre and heard it being blasted around the clock before that fateful day by the army-run Yankroh radio station alternating with the hateful phone-in comments against the students inside Thammasat University, this is unquestionably a far-right hate song for its association with this bloody history.

Born in 1960, Gen Apirat was then 16 when the "October 6" bloodshed took place. So, I doubt whether he has a profound understanding of the significance of the song, especially its title, Nak Phandin, and its influence over the psyche of its audience as it was repeatedly blasted into their eardrums.

The song was written in 1975 when Thailand was gripped by fear that it might be the next domino to fall after the collapse of Vietnam, Laos and Cambodia to the Communists and the rise of left-wing student and labour activism under a lame-duck government. But it was a year later that the song earned its infamous reputation.

This song and the hateful comments, when aired non-stop, fired up a bloodlust which culminated in horror for a land of Buddhists, ironically, well-known for the smiles of its people.

I was then a rookie reporter covering the student activism beat. I was at Sanam Luang, located next to Thammasat University campus, on the morning of Oct 6, 1976, and was totally shocked by what that occurred right in front of me. A fair-skinned student was hanged on a tamarind tree while a smiling man struck the dead body with a folded chair. Then, there was another horrible scene when a dead man was dragged across the field with a rope tied to his neck. That second scene was even more shocking when I saw a young boy sat on the dead body smiling. More inhuman and unimaginable things happened to the victims inside the university campus.

I was so overwhelmed that I wept when I returned to the office to relate what I had witnessed to my news editor. I couldn't write for several hours. Even if I could have written my account, it would never have made it into print anyway, because that same night, a military coup took place to oust MR Seni Pramoj's Democrat-led government and all newspapers were suspended. Only the Bangkok World afternoon paper, a sister publication of the Bangkok Post, managed to tell Thai readers the grisly happenings at and around Thammasat in its picture pages, which were worth more than a million words. 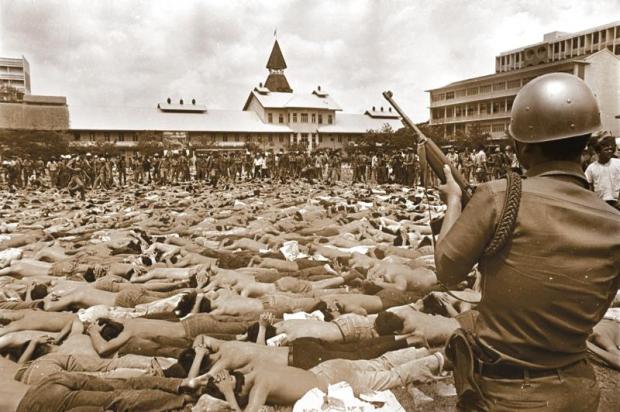 In this Oct 6, 1976, file photo, police, soldiers and far-right paramilitaries round up student protesters inside the campus of Thammasat University after a massacre that left at least 41 dead. (Bangkok Post file photo)

These memories of that dark period in Thai history have always remained in the back of my mind. However, they leap to the fore every time I hear that hateful song, which should have been shelved for good like those DJs who incited their gullible audience to come out to teach the left-wing students a lesson.

It was saddening that even Deputy Prime Minister Prawit Wongsuwon joined in the fray during his defence of military spending by referring to the song, basically calling Khunying Sudarat a Nak Phandin for her comments, which is a very serious and unfair accusation.

Although I am not a fan of Pheu Thai, I find what she said fair and reasonable. Instead of countering her by implying she is a Nak Phandin, the army should come up with a reasonable justification of its budget needs and, also, be open-minded enough to listen to criticism in a professional manner.

Although the army later ordered all its stations to stop airing the song to outsiders and to limit its broadcast to within military barracks, I still find the song out of touch with today's reality and, more importantly, divisive.

If the army wants to pump up its men with awareness of their duties and obligations toward the country and its people, there are other more suitable martial songs it can air.

How to save country when it's broke

Where did we go wrong in the battle against Covid?