Kazakhs celebrated, while "Team Thailand for the UN Security Council" was left to analyse what went wrong, and what to do about it. (AFP photo)

Thailand's failure to win a United Nations Security Council non-permanent seat last week was a big disappointment, but not totally unexpected. My first advice, as a senior member of Team Thailand to the UN Security Council, is that we must have a secondary objective, an alternative goal for ourselves: "Win or lose, Thailand will come out of this campaign with our profile higher and our responsible presence in the community better appreciated than before."

Prior to June 28, we received strong vote commitments, both written and verbal. But the "mechanics" to translate those commitments to actual votes did not quite deliver what was intended. Even diplomats in New York and Geneva have privately expressed a sense of disbelief at the outcome.

Many congratulated Team Thailand for the professionalism of their campaign and the diplomatic finesse that it has displayed along the trail of this global contest.

This is not an exercise in exoneration, nor is it a time for recriminations. But a few observations can serve as elements of a full post-mortem that must follow such an unaccomplished major national exercise.

First and foremost, the long period of delay and discontinuous efforts on the part of various governments, six prime ministers and even more foreign ministers certainly did not help the cause. And since the coup of 2014, bilateral visits or bilateral consultations at the high and political levels were much curtailed. It's different from the time when we successfully ran the candidacy of Supachai Panichapakdi, a former deputy prime minister and minister of commerce, for head of the World Trade Organisation back in 1999-2000. 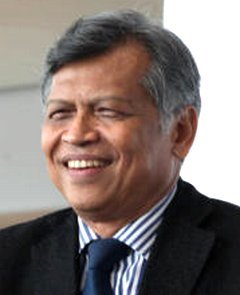 Surin Pitsuwan, former foreign minister and former secretary general of Asean, is a member of the Team Thailand for the UN Security Council.

Second is the prolonged, disruptive and tumultuous nature of Thailand's own national politics in Asia. I was at Asean for five years and had to work with five prime ministers. Decisions on any issue could not be made in a timely manner. Ratification of agreements always meet with delays.

Third, frequent changes in the top leadership and coalitions in themselves would not have been so damaging if we had known how to differentiate between issues or policies that should be handled with partisanship, bi-partisanship or non-partisanship. Our politicians appeared to have been confused and clouded by every initiative of previous governments as partisan matters were invariably politicised to the detriment of the long term national interest.

Foreign policy is one such area that should be the least politicised, always keeping in mind that "politics stops at the water's edge". The core interest of a nation in foreign affairs rarely changes, only the emphasis and the approaches may shift now and then. Unfortunately, the quest for the UNSC non-permanent spot suffered from that confusion all through the years since 2007 when it was decided. Missing this one chance, little that we know, Thailand will have to wait until 2025.

Fourth, years of state denial on many regional and international issues ended when the global community decided to end its long period of patience and excuses. The case of human trafficking with the United States, the illegal, unreported and unregulated situation with the European Union, the protracted controversy over air safety standards with the International Civil Aviation Organisation, the on-going violence in the Deep South, the curtailing of democratic space are but some of the issues that have put the kingdom on the defensive in the international arena.

Fifth, the global economic downturn and the sluggish global recovery have taken the gloss of Asean's shining armour. And Thailand, as the second largest and most diversified economy of the grouping could not be said to be most attractive in domestic consumption, international commerce, foreign investment and trade as in the past.

One may be tempted to ask: haven't all these been known to the decision makers before deciding to continue with the quest for a precious space on the world body's most powerful mechanism, the UNSC? The answer is definitely a cautionary "yes". But there were also reasons to persevere and toil on in the face of all odds.

Since the decolonisation process got underway in Southeast Asia, Thailand has been complacent by regarding itself as an exception. Surviving the onslaught of colonialism in the 19th century and the rapid and sustained economic transformation of the last third of the 20th century has re-enforced that sense of exceptionalism and the ability to survive into the future with little sense of urgency.

Thais feel equal to foreigners and harbour no sense of inferiority or discomfort in dealing with others. Hence, ours has been a "diplomacy of accommodation", welcoming and accommodating all on an equal basis. Thus, Thailand has been generally passive on the global stage, engaging the world with less passion and carrying no chip on our shoulders. The Thai mindset has always been "keeping it internal, managing it by ourselves, no need to expose our domestic affairs to external involvement". That "narrow comfort zone" is now under stress and appears to be wavering as a result of regional and global competition.

"Thailand has been punching below its weight in recent years" is not an incorrect observation by friends and allies who have been disappointed with the country`s performance lately. The pride of the past, the pervasive sense of "Thai exceptionalism" and the misguided confidence that regional changes and global transformation could be ignored have now become like "a chicken coming home to roost".

The decision to continue with the UNSC candidacy and the ensuing campaign could be seen as a catalyst for that necessary shift in the cozy national mindset and to break that cocoon of comfort in a world of reality and fierce competition. For this is the most damaging psychological trap that will undermine the country's urgent need for reform in all other areas. Thai exceptionalism must be put to rest once and for all. The people must "feel" the shocking reality of competition, already warned in many surveys by many institutions.

To turn the traumatic experience of national disappointment into an opportunity for self-renewal, the Thai people and our leadership must now feel the urgency of national reform in all areas. The traditional complacency and muddle-through approach are no longer adequate and have been dealt a decisive blow. Let's count our blessings that have emerged from the UNSC campaign.

We have a group of exceptionally talented young women and men in "Thai diplomacy" who devote themselves above and beyond the call of duty. I feel privileged and honoured to have been a part of their uphill struggle on the long and ardous road, uneven and oftentimes inadequately guided. Rather than inspiring them, I felt very much inspired by their courage, enthusiasm and commitment in their patriotic efforts.

But their hands were tied. Theirs was not a problem on the diplomatic battlefield, but the shortcomings on the home front. As Richard Haass, president of the New York-based Council on Foreign Relations, observes in his book Foreign Policy Begins at Home, and I paraphrase him: "Put your house in order first before you can expect success abroad."

If the failure in New York could serve as a loud wake-up call, or shock treatment for the Thai leadership and the generally disinterested Thai public, it would be another redeeming consequence. The important fact to remember is 60% of our total 14 trillion baht GDP has something to do with exports to foreign markets and direct foreign investment from abroad.

The bridges and connectivity that our able young diplomats have built and woven together during the past several years, through the ups and downs and vagaries of "domestic politics", will be a valuable platform for our future diplomacy.

But first and foremost, the domestic divisiveness must come to an end sooner rather than later. Some semblance of democracy and respect for human rights must be restored. Too much is at stake out there in the international arena, where our national interests are intimately intertwined with those of others, for the country to be consumed by internal conflicts. As Richard Haass admonishes us, again, that "shortcomings here at home directly threaten ... ability to project power and exert influence abroad".

The loss of the UNSC seat in New York is but a symptom of our national malaise accumulated during the past several years. There will be other competitions for other coveted positions coming along. Let this be a turning point of self renewal, of a new phrase of nation building and unification of a new era of national transformation, readying ourselves for future opportunities where our national resilience will be put to the test and our national interest will be at stake again.

The task will not be easy. The headwind will be strong. The challenge formidable. But first we need to break out of that "cocoon of comfort" that has lulled us into a misbelief that our "exceptionalism" will continue to serve us well. If anything the world will become even more complex, and the Thai people will have to rise to the challenge.

LONDON: Britain put the prospect of a chaotic Brexit back on the table on Thursday as it set out its red lines for upcoming trade talks with the European Union.