Women are a potential boost to the region's economy
Opinion

Women are a potential boost to the region's economy 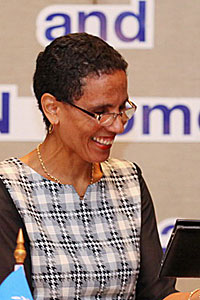 A woman rides her bicycle past a Tokyo electronic board showing the latest currency exchange rates. (Reuters photo)

By most measures, the Asean region is an economic powerhouse. It is the seventh largest economy in the world. Labour force expansion and productivity improvements drive GDP growth and the 10 member states are making impressive strides in both areas. Almost 60% of total growth since 1990 has come from sectors such as manufacturing, retail, telecommunications and transportation. But the evidence shows that the gains are not distributed fairly and to redress this, governments need to plan and implement policies that better promote inclusive, sustainable and fair growth.

Given the commitment by Asean member states to gender equality, girls and women have made considerable gains in access to education, representation in the work force and equality before the law. Still too many women are limited to under-paid, low skilled, under-valued occupations and work under insecure conditions without labour rights and social protection. Women in Southeast Asia are currently over-represented in the informal economy, in low-income positions and lower-value sectors such as agriculture and the garment sector.

Although the Asean Economic Community (AEC) promises expanded opportunities for decent work, entrepreneurship, trade and labour mobility, practical and institutional challenges will impede women's empowerment, according to the study on Projected Gender Impact of the Asean Economic Community, by the Asean Secretariat, UN Women and Friedrich-Ebert-Stiftung, supported by the Australian Department of Foreign Affairs and Trade.

The study argues that empowering women so they can equally participate in and benefit from Asean economic integration is essential for inclusive development. It highlights the need for positive and targeted measures. Higher educational attainment, for example, does not always translate to increased presence in senior management in the private sector. The study also found that women had limited access to credit, technology and non-traditional vocational training which hindered their participation as entrepreneurs across a diversity of sectors.

If women had more opportunities to contribute, not only would economic empowerment and well-being be advanced, but trade within Asean and to the rest of the world would grow. For this to happen, a range of steps are necessary.

Women-owned Small and Medium Enterprises, already an economic force in some countries, can be further encouraged by tax breaks or mentorship programmes. Cultural change is also needed in the private sphere and in the home. More men are accepting equal responsibility in caring for children, the sick and the elderly. But women in the region still do an estimated three and a half hours more household-related and unpaid work than men a day.

Culture and customary laws also hold women back from accessing opportunities, sometimes despite legislation meant to end discrimination. Traditional codes of conduct, cultural stigmatisation of women executives or restrictions on women's claims to household property and finances, all seriously curtail women's ability to participate in the economy.

Policymakers, corporations and individuals all have responsibility to make sure women are empowered with the right opportunities and labour market interventions. This will contribute both to ensuring women's economic rights and also influence the growth of trade and economic progress in the AEC starting this year.

Roberta Clarke is regional director of UN Women Asia and the Pacific and its representative in Thailand.

Roberta Clarke is regional director of UN Women Asia and the Pacific and its representative in Thailand.

SURAT THANI: A total of 711 foreign tourists had arrived on three islands under the Samui Plus programme over the past 60 days, and spent more than 47 million baht, according to official figures.

The Covid-19 task force makes it clear that opening Bangkok and other cities to vaccinated foreign tourists is dependent on satisfactory preparations being in place to deal with any surge in infections.

Get past the Thai-China trade deficit