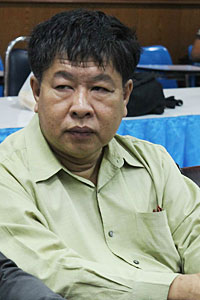 Kasetsart University: Some hazing is fun for some. Some is downright sadistic and dangerous. (File photo by Apichit Jinakul)

As the first semester in many Thai universities begins this week, it will come as no surprise that we will probably see or hear more about notorious or dangerous hazing activities taking place for three months.

The latest controversial hazing at a Bangkok university reminds many of us how barbaric, inhuman and humiliating this initiation ritual can be. More than 40 photos have been shared on the Facebook page of the Anti-Sotus group which illustrate how freshmen were ridiculed and harassed. Some young men were stripped to the waist rolling in the mud while young women were told to kiss men's nipples.

Hazing has long been part of initiation ceremonies for first-year students in Thai universities. Conducted by students in more senior years, it is claimed to be used as an opportunity to get to know each other and build unity or to learn about a university's social etiquette. In fact, this culture has become the breeding ground for authoritarianism in Thai society. It is a step backward which contradicts the need to promote intellectual and logical thinking in educational institutes.

There is no solid evidence indicating from which countries hazing rituals originated. Nowadays, hazing barely exists in the US and European countries. There might be a week of introducing freshmen to the university, to their courses or just an activity week. On the contrary, hazing ceremonies are a big deal for freshmen in Thailand.

It is understood Thai universities inherited the hazing tradition from the UK where it was used as part of university students' ice-breaking and unity-building activities. The Thai hazing tradition began during the reign of King Rama VI at the now-defunct Royal Pages School, the military school and the Vajiravudh College, before spreading to other educational institutions.

It had become widespread from 1947 as a response to the expansion of university education in Thailand and later turned to be a more aggressive and notorious ritual known as Sotus (which stands for Seniority, Order, Tradition, Unity and Spirit). Sotus allowed student hazers to impose more ruthless practices on freshmen over a longer period of time. Then, as Thailand moved toward the authoritarian rule of military regimes, hazers applied military disciplinary acts on younger students intensifying the Sotus tradition.

Even though it was intended to impress new students with a sense of welcoming, Sotus applied ruthless acts in the name of unity building. Hazers were allowed to yell at first-year students and punish them as they wished.

During that time, the practice became more intensified and aggressive in institutes with predominantly male students such as the then Mae Jo Institute of Agricultural College, Kasetsart University's Faculty of Forestry and Chulalongkorn University's Faculty of Engineering. Other faculties had also set their own rules which, for example, prohibited freshmen from using certain areas in the campus or invented an enforced dress code for them.

The root cause of Sotus was the arbitrary use of power. Formats of activities under this tradition were not sensible and failed to foster intellectual thinking. They could cause injuries or fatalities. As a result, since 1969, there had been an anti-Sotus movement taking places at certain campuses such as Chulalongkorn University.

Then, there was a new so-called Sotus group formed at Thammasat University in 1971 as a mockery and a rebuke to the traditional Sotus tradition. The new group succeeded in bringing down the Sotus ritual and removed it from all welcoming activities of the university which alternatively embraced a tradition that promoted equality. In the same year, the then newly-established Ramkhamhaeng University rejected the hazing tradition. From there, the anti-hazing rhetoric partly influenced student political movements that led to the Oct 14, 1973 uprising which brought the end of the ruling military dictatorship.

Since 1974, the growing influence of the leftist university students movement had rooted out the Sotus tradition and introduced a new custom of welcoming which involved educational activities, academic seminars and days of public service. Almost a decade later, upon the collapse of the leftist student influence, Sotus had made it way back to Thai campuses, and this time with growing intensity.

Today, hazing and initiation ceremonies have become deeply rooted in leading universities, including Chulalongkorn, where hazers are allowed to close the campus for two days to conduct such rituals. There is no longer a respectable custom of welcoming activities we saw during the leftist student years.

Hazing and initiation ceremonies nowadays fail to foster intellectual or critical thinking. Their existence reflects the absence of social and cultural critique in today's universities. It is unlikely that hazing and initiation activities will be terminated anytime soon, but will remain to foster authoritarianism in Thai society.