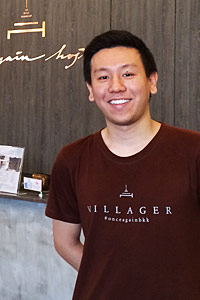 Residents of the Mahakan Fort community carry on with their daily routines last Friday as they prepare for their forced eviction the following day. (Photo by Jiraporn Kuhakan)

In its effort to turn the five-rai Mahakan Fort community into a new public park, the Bangkok Metropolitan Administration (BMA) has once again offered Bangkok residents an urban development plan that excludes their voices.

We don't know what the plan will look like in the end. None of us has seen a blueprint of the park. I doubt it will really serve the public interest.

Unlike its other efforts to tidy up several Bangkok street vending areas where traders have been forced to leave public space they illegally occupied, this planned eviction is to uproot the long-time residents who have lived behind the tall walls of the fort. Most, if not all, of them possess household registration documents.

Standing at a corner of Ratchadamnoen Road next to the Phan Fa Bridge, the Mahakan Fort has for over two centuries served as a home to generations of residents and their traditional wooden houses -- the rare and unique pieces of architecture constructed during the early Rattanakosin era.

The eviction of the Mahakan Fort community is being carried out even though the BMA has not shared its detailed transformation plan with the public, nor explained the value to city residents who may use the public space. Previously, City Hall turned a number of Bangkok areas under similar face-lift plans into either abandoned places or unfinished businesses. Look at how rotten the Saphan Lek area has become following the clear-out last year and you will question the legitimacy of the Mahakan Fort transformation.

In my opinion, the fort saga has nothing to do with who is right or wrong. It is something to do with the city's residents like us who have the right to know about the BMA's urban development plans. Instead, the Mahakan Fort face-lift should tap the area's true potential: old traditional houses and their residents who are committed to being part of a transformation that will benefit the general public. That can happen if City Hall adopts an alternative development model to turn the area into a living museum, as proposed by the community.

Sadly, the BMA has turned down the proposals. It is unclear why the BMA has not allowed Bangkok residents or the fort community to have a voice in the plan. If the transformation strives to provide "a space for all" as claimed, why doesn't the BMA allow us and the residents to co-create this public space?

The poor and vulnerable usually fall prey to state forced relocation to pave the way for what are considered "development plans". Several times, they have been kicked out of the city and moved to other provinces which further marginalises them. Is this the true goal of urban development? Would it be better if the BMA integrated these residents, gave them education, or hired them to work on projects and set common rules for them if they want to continue living there? It cannot just transform the areas but must improve residents' livelihoods.

Bangkok is growing every day. Developing the city's landscape will eventually affect its population. Many development plans will affect a number of communities. The BMA needs a clear framework on how existing communities can live with its development projects and what kind of privacy they have to sacrifice. The Mahakan Fort development plan proposed by the community can serve as a model for such a framework. The fort community has offered to be part of a living museum and the park. Within two years, they have pledged to leave their homes if they are proven to have failed to integrate into the new surroundings.

Some said they should move out because the BMA has paid them compensation for the expropriation. The truth is more than 90% of the compensation went to landlords who have never lived there. The majority of community members are land tenants and some received a small amount of compensation.

At a time when the state's power seems to be unstoppable, they took that small compensation and left for a site on the outskirts of Bangkok deemed unlivable, lacking utilities. Under such conditions, many came back, and today, they demand to have a say over the community development and agree to pay back the compensation, as well as sacrifice their privacy. Instead of giving them a chance to be part of development, the BMA is forcing them out to live somewhere else and become a burden on other communities.

Legal experts have pointed out that the law on expropriation can be amended or changed to allow community members to continue living in the area by taking a safeguarding role. Laws are a matter of technicalities and can be changed. What is more important in this matter is the vision of city administrators -- how and in what direction they want to develop the city.

The Mahakan Fort saga stands as an example of how our urban planners overlook the importance of people.

Some people may think that this is an obscure issue, but they may be wrong. If the houses of the fort community can be demolished, why can't our homes? The state could use the law to buy our plot and evict us in the same way they are doing to the Mahakan Fort community.