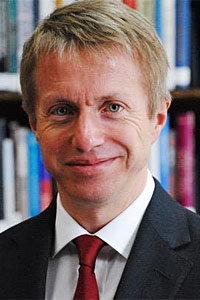 John Nilsson-Wright Head of the Asia programme at Chatham House

Kim Jong-un was ecstatic in June at the test launch of ground to ground medium- long-rang ballistic missiles. One can only imagine how much more happy he was with last week's atomic bomb test. (Reuters photo)

The announcement last Friday that North Korea has carried out its fifth test of a nuclear device has once again raised fears of regional instability and the prospect of a potential armed conflict on the Korean peninsula. However, coming on the heels of the last test in January of this year, cynics might ask "what's new?"

Pyongyang provokes and the international community condemns the regime and imposes new sanctions, but to little effect.

Meanwhile, Kim Jong-un, the young dictator taunts the West for its powerlessness while boasting of his country's growing military and technical prowess, and its ability to act with impunity, even in the face of criticism from China, North Korea's nominal fraternal ally and core provider of energy and food aid.

As in the past, the North is sticking to its familiar playbook, using the tests to bolster its nuclear programme and its deterrent capability by increasing its nuclear stockpile, enhancing its technical ability to marry warheads with missiles (especially in the wake of a recent flurry of relatively successful missile launches), and in the process posing an increased threat to the North's neighbours, most immediately South Korea and Japan, and potentially also the continental United States.

At a suspected 10 kilotonnes, the latest test is the largest since the country's first in 2006. Worrying as this is, the evidence that the North has successfully miniaturised is still inconclusive, despite boasts from Pyongyang that today's device could fit on a missile.

The country's nuclear ambitions date from the 1950s and past North Korean leaders have routinely used a policy of military strengthening as a means of bolstering their legitimacy in the eyes of their public. In this regard, today's test is consistent with earlier policy. The novel element is the character of the current leader, Kim Jong-un, who since taking power in December 2011 has brutally consolidated his power at home, distancing himself from the rule of his father, Kim Jong-il, by purging and executing senior officials associated with the previous administration.

As South Korea's former minister of unification Kihl-jae Ryoo (who served from 2013-15) noted on Wednesday at a talk at the London think tank Chatham House, "Kim Jong-un's policy making is arbitrary, dogmatic, and impulsive. His style of leadership worries many. People fear that it could actualise the security threats in the peninsula. It concerns me that such recklessness -- like a child playing with fire -- could ignite a blaze."

Despite sensational media claims of a "crazy" North Korean leadership, most informed observers have assumed that the North is rational. It knows that any pre-emptive nuclear strike against the South would invite a swift and devastating response from the US, and therefore will avoid using such weapons, preferring instead to deploy them as a deterrent. Under the current leader, however, the logical reassurance of deterrence and sober strategic calculation is beginning to look increasingly less reliable. The worry is that Mr Kim is at heart a risk-taker, much more inclined to play the game of rhetorical and actual brinkmanship than his father. With his counterpart in South Korea, President Park Geun-hye, taking a much harder line against the North, while shoring up the South's military capabilities, the danger is that the two Koreas might find themselves trapped in a cycle of tit-for-tat political and tactical provocation and counter-provocation that could swiftly escalate into full blown conflict, with devastating consequences.

The means for resolving the current situation are either ineffective or unpalatable. More sanctions, building on UN Security Council Resolution 2270 (the toughest sanctions in 20 years), are unlikely to discourage the North from pushing forward with its military programme (even assuming that China is willing to implement the sanctions more aggressively -- an uncertain prospect). Wider engagement, whether through diplomacy or cultural and humanitarian assistance, is politically unfeasible in an election year in the US, where concessions to the North would be viewed as tantamount to "appeasement". Increasingly some strategists are starting to talk of the need for military action, but surgical strikes against the North would not necessarily be able to pinpoint its nuclear assets and would almost certainly involve civilian casualties.

Mr Kim appears to recognise that this situation gives him the upper hand. His willingness to embrace risk and uncertainty to pursue his provocative ambitions has allowed him to defy the more cautious members of the international community. Consequently, we are moving ever closer to the tipping point when the North's missile and nuclear weapons capabilities come together -- a time of maximum danger when military force may be the only option left. ©THE INDEPENDENT

Dr John Nilsson-Wright is head of the Asia programme at Chatham House and a senior lecturer in the politics and international relations of Japan and East Asia at the University of Cambridge.

Head of the Asia programme at Chatham House

Dr John Nilsson-Wright is head of the Asia programme at Chatham House and a senior lecturer in the politics and international relations of Japan and East Asia at the University of Cambridge.