Building an inclusive society in the age of Asean
Opinion

Building an inclusive society in the age of Asean 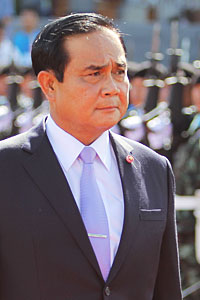 The year 2016 marks the 70th anniversary of Thailand as a member of the UN. Thailand firmly believes that sustainable development cannot be realised where there is no peace and security or when human rights are violated, abused, or disregarded, and vice versa.

To achieve the SDGs, a shared responsibility and collective efforts, as well as active engagement with and contribution of regional, political, or economic groups are vital. No single country, be it the most powerful or prosperous one, can push for such achievement alone.

This year, Thailand chairs the Group of 77, representing the views of 134 developing countries in various negotiation processes of the United Nations.

We have been bridging the group's position with other groups and partners, in particular, by strengthening cooperation with the group of major economies -- the G20.

We have shared our experiences and lessons learnt in overcoming socio-economic challenges through His Majesty the King's Sufficiency Economy Philosophy (SEP) as an alternative development model, in which the people-centred approach, moderation, reasonableness, inclusiveness and resilience are key principles.

The SEP model has so far been used and adapted to fit the national context in over 20 countries.

Expanding and strengthening cooperation with partners have also been highlighted. Thailand stands ready to promote further cooperation with all groups, such as BRICS (Brazil, Russia, India, China and South Africa) and Asean, in the implementation of the Sustainable Development Agenda.

Next month, Thailand will host the 2nd Asia Cooperation Dialogue Summit which could also serve as a forum for further discussions on the implementation of SDGs.

The beginning of the Asean Community this year does not only bring the people of Asean closer through economic and cultural links, but also develops cooperation and partnerships, which will lead to conflict prevention and further peace building within the region.

The Thai government attaches high importance to incorporating such a global agenda and goals into actions, policy and laws. We have established the National Committee on Sustainable Development and incorporate the SDGs into our 12th National Economic and Social Development Plan (2017-2021), and our 20-year National Strategy.

We also have a policy of providing quality healthcare services for all, including migrants and foreign workers, regardless of their status, through the government's Universal Health Coverage scheme, as well as other initiatives such as the anti-microbial resistance campaign.

On education, the government has a compulsory education programme to ensure basic education for all, with a view to increase economic opportunity for children and youth in the kingdom.

Moreover, the government places high importance on the freedom, equality and well-being of people, as well as inclusive and equitable access to basic services. We have reviewed national laws and regulations with a view to achieving tangible and sustainable results.

A new legislation on gender equality to promote women's rights has been enacted. Several measures to enhance protection of at-risk and vulnerable groups have been taken, including the establishment of funds to take care of new-born children, disabled people and the elderly.

Adequate housing and land distribution have also been provided for the low-income population, since it is the government's view that those people, if properly empowered and protected, can be a valuable asset and contribute to a strong universal push to transform our world.

On the environmental and climate change issue, Thailand is pleased to ratify the Paris Agreement and call on other countries that have not yet done so to become party to the agreement at the earliest opportunity.

On our economy, the government initiated the so-called "Thailand 4.0 model", which employs technology and innovation as driving forces for sustainable economic development in the agricultural and industrial sectors, among others.

The model places emphasis on education, infrastructure, research and development, and creating incentives and a safe environment for the private sector, through the review of business laws and regulations to reach international standards and fight corruption. We believe such an approach will help overcome the "middle-income trap" and allow Thais to participate in deciding the country's future in an inclusive manner.

In addition, Thailand supports strengthened international cooperation and global partnership. We believe there is no one-size-fits-all model. Therefore, we need to adapt the relevant development model to the context of each state through experience sharing, with a view to galvanising such diversity into a harmonised unity.

The year 2016 has also been an important year for Thais and the direction in which the country is headed. On Aug 7, Thais voted democratically to approve the draft constitution in a referendum. At present, constitutional by-laws are being considered which will lead to general elections in late 2017.

This referendum has reflected a genuine intention of the government to promote democratic processes, while taking into account the views expressed by the international community.

The government came in to oversee the situation during a period of transition, to bring about order and security and pave the way towards sustainable political governance.

Once the situation started to return to normalcy, the government put an end to temporary security measures such as military jurisdiction over civilians.

We believe addressing such problems at their root causes can serve as a strong foundation for a sustainable democracy and good governance, with the hope that Thailand and the Thai people will become quality members of the global community.

Prayut Chan-o-cha is the prime minister of Thailand. This article is an abridged and edited version of his statement delivered at the UN General Assembly on Sept 21 in New York.

Also, a retired Royal Thai Army officer who is the current Prime Minister of Thailand and head of the National Council for Peace and Order (NCPO), a military junta that has the power to control the Prime Minister position.

Hong Kongers can expect to test ride electric minibuses and cross-harbour ferries in 2023 as HK$430 million (1.75 billion baht) has been allocated to develop green-energy transport in the budget announced on Wednesday.