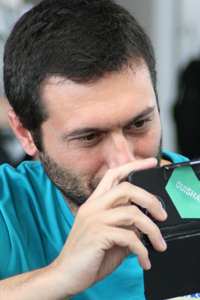 The "sharing economy" can do more than simply help someone find a rental car or a place to stay for a night in a strange city. By embracing the full potential of this new way of thinking and doing business, developing nations have the opportunity to transform their economies and improve the lives of millions of their citizens.

The traditional notion of the sharing economy is most often associated with peer-to-peer platforms like Uber and Airbnb, but can be expanded to include digital manufacturing, open data and horizontal governance practices. The huge potential of society is unleashed by the decreasing cost of coordination and transactions combined with increased levels of trust mediated by technology. This unique situation holds huge potential for developing economies.

Arun Sundararajan, professor of information, operations and management sciences at NYU's Stern School of Business, published a paper explaining how consumers from lower income groups look set to be the big beneficiaries of the peer-to-peer (P2P) rental market generated through the sharing economy. The study focused on P2P car rental schemes in San Francisco, yet some conclusions are clearly transferable elsewhere, including to developing countries.

In rental marketplaces there are several sources of value creation.

In the car market, vehicles are used more efficiently, allowing more to be done with less. This brings car use within the financial reach of a group of consumers previously shut out of the market. Access to and cost of transportation are well known barriers to inclusion, but those who have cars and decide to rent them out can generate extra income decoupled from labour income. Diversifying income sources makes the person/family more resilient. As professor Sundararajan says, "[With a sharing mindset] you are democratising access to a higher standard of living."

DataShift is an initiative that builds the capacity and confidence of organisations to produce and use citizen‑generated data. Its initial pilot locations include Argentina, Nepal, Kenya and Tanzania. Citizen-generated data has the potential to be a powerful alternative source of data on development progress (including some United Nations Sustainable Development Goals) that can support the accountability and campaigning of civil society and the decision-making of governments.

The DataShift archive is large and inspiring: a public authority in Argentina now includes and responds to data citizens have submitted on river cleanup operations; Nepal's cabinet used citizen-generated data to identify areas of need in the aftermath of the April 2015 earthquake; and data collected by a Kenyan organisation was used to get more teachers allocated to schools in the underserved Turkana district.

Citizen-generated data and citizen participation is one of the "obvious" solutions that, once deployed and validated, makes you wonder why nobody had thought of it earlier.

Despite slow progress, some see digital currencies (Bitcoin and others) as the next step in helping many developing economies to enter the formal economy. Some of its backers even claim it could leapfrog traditional financial infrastructure in areas of the world where two-thirds of people remain "unbanked". In fact, the first real large scale use of Bitcoin in this context has been to circumvent expensive middlemen such as Western Union with a more affordable way for African and South American diaspora to send money home.

Africa hosts several Bitcoin exchange services, such as ICE3X, BitX and BitPesa, where users can trade Bitcoin and traditional currencies. Bitpay provides a similar service in South America. In addition to remittances, for some unstable currencies, Bitcoin is in fact a store of value, with less fluctuation than the official government currency.

Last but not least, we must discuss blockchain. What can this fully distributed and public open-ledger technology be used for?

A Y Combinator-backed startup from South America, Democracy Earth, believes Blockchain could be used to fight corruption through internet voting technology. Rather than recording votes in one place, Blockchain records everyone's vote across a network of thousands of computers. The system can also validate identities in the same decentralised way.

This autumn, Democracy Earth ran a pilot alongside Colombia's referendum on a peace deal between the government and the Farc guerrillas. The pilot recorded votes from some of the seven million Colombians who live outside the country and can't easily vote, along with those under the age of 18 who can't yet legally vote. As a pilot, the results were not binding for the government, but the platform gave expats and youth a way to share opinions.

Other startups, such as Provenance and Everledger, believe blockchain provides traceability and transparency in product supply chains. Everledger is initially focused on diamonds, while Provenance is more generalistic. It is easy to imagine the impact of these technologies if applied to fair trade or unique artisanal products, for example.

I personally think about blockchain as the mechanism that provides any person on earth with an immutable digital trust/reputation record. In developing economies, there are huge barriers to participation in the formal economy due to a lack of reputation beyond a person's inner circle (family, friends, neighbours) and due to the lack of formal contracts (informal agreements are the norm).

Steve Knack, an economist at the World Bank with a long-standing interest in trust, once said that if one takes a broad enough view of trust, "it would explain basically all the difference between the per capita income of the United States and Somalia". In other words, without trust there is no prospect of economic development -- simple activities become arduous in a low-trust society.

If developing countries are brave enough to embrace the full potential of some of the "sharing economy's" radical innovations, they have a very real opportunity to leapfrog so-called "developed economies" on several fronts. It remains to be seen which of them will make the leap first? The Mark News