Moving towards a world where girls are equal to boys
Opinion

Moving towards a world where girls are equal to boys 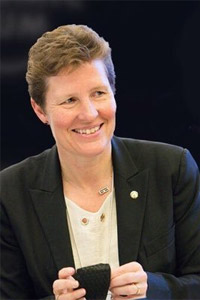 Imagine a world where girls and young women are seen and heard, occupying positions of influence within their communities and beyond. Today, you won't have to imagine: girls will be stepping into the shoes of political, social and economic leaders in a mass takeover that will make the invisible lives of girls -- both their plight and their potential -- truly visible.

When girls see what is possible, they are more likely to be inspired for themselves and become active agents of change. But the takeovers also provide an opportunity for those stepping aside to work with young women, to listen and learn; to find out from them directly how they want to change their lives for the better.

Because lives need to change. In every walk of life, girls face discrimination and injustice. Millions are denied their rights to a good education. They are unable to play an equal role in society. They are prevented from taking important decisions that affect their lives, including decisions about sexual and reproductive health. And they are often at risk of violence.

Things can change. Last year the UN agreed an ambitious set of Global Goals that include the promise of achieving gender equality by 2030. While the challenges in achieving those goals are vast, they are not insurmountable, if we act and act now. That will require a clear-sighted agenda for change, based on six key elements.

First, we need to get the legal framework right. Currently, there are few direct mentions of girls in key international human rights instruments and, until that changes, girls will remain invisible.

A strong, grassroots movement for girls' rights has emerged in recent years. We need now to strengthen and sustain that movement, building solidarity with the girls and young women already at the front lines demanding their rights. Our global "takeover" is just one way in which we plan to grow that movement.

Third, while the UN's Global Goals represent an impressive statement of intent, they are just words unless governments act on the commitments they've made. We need to be ready to help countries deliver, but also to challenge them when they don't.

If we are going to hold governments to account, we need better data and we need to use it more effectively: girls are "invisible" to policy-makers because they are not being counted. But better data are also vital to making the right kind of decisions and investments that can transform girls' lives.

Transformative change also requires new ways of working. We need to involve everyone, and the private sector has just as much of a role to play here as NGOs. Only by finding new ways of collaborating will we be able to find new solutions to complex problems.

Finally, we need to get the resourcing right. Just meeting the worldwide need for pregnancy-related care will require US$28 billion (982 billion baht) annually, a 100% increase from current funding. We'll need to be smarter about using all of the resources that are available, including working with the private sector.

If we are serious about reaching the Global Goals, we need to get serious about making change happen. The six changes are a map; our girls' takeover is the compass, setting the direction in which we need to travel. Today, girls will step into some of the biggest shoes around, from presidents to business leaders to head teachers and journalists. It is a powerful glimpse of the world we want to see. Our challenge is to make a future in which every girl has the chance to take over, and for more than just one day.

Anne-Birgitte Albrectsen is the CEO of Plan International, an independent development and humanitarian organisation that advances children's rights and equality for girls.

CEO of Plan International, an independent development and humanitarian organisation

Anne-Birgitte Albrectsen is the CEO of Plan International, an independent development and humanitarian organisation that advances children's rights and equality for girls.

Duty-free sales on China's island province of Hainan surged in the first week of July after Beijing raised the annual tax-free shopping limit for tourists as part of its new free-trade port plan.

Five new cases of coronavirus disease reported, all quarantined returnees - from the UAE, US and Singapore.