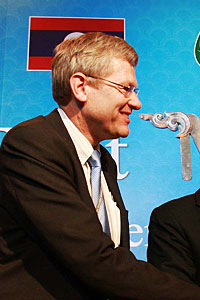 The Chao Phraya dam in Chai Nat reached its capacity in September, and authorities had to discharge water, which caused flooding. (Photo by Choodej Srihawong)

The recurrent threat of both flooding and drought looms large over many parts of the Mekong region. This variability is natural but is increasing due to climate change. Their destructive effects can be either relieved or compounded depending on the way dams are operated.

Water storage, however, can be a part of a solution. It just needs to be approached differently including a focus at smaller-scale solutions as well as conventional approaches, such as the use of large-scale flood protection infrastructure.

Governments and communities can adopt a number of innovative and low-cost water storage techniques proved to not only help minimise damage but also provide benefits. The need for new approaches is urgent as climate change has made extreme weather events become more intense and unpredictable, putting lives and livelihoods at greater risk.

In 2008 to 2010, the Mekong region experienced some of the worst droughts and river floods for years, which was while I served as CEO for the inter-governmental Mekong River Commission. For floods, we had mechanisms for cooperation across all six countries to help provide advance warnings and reduce damage. But for droughts, systems in the region were less developed.

Embracing a wide set of response measures and rethinking how we look at water storage at all scales can be a key to delivering climate resilience. Many approaches exist, and new ideas are emerging from the research world -- so what is new?

The vicious cycle of too much or too little water could be broken with innovative forms of water management, including a low-cost technique called underground taming of floods for irrigation (UTFI). UTFI involves the setting up of recharge facilities, such as ponds, in upstream areas. During the rainy season, excess water from rivers flows into the ponds and then infiltrates into the ground. In the dry season, the stored water can be retrieved by using pumps, preferably solar pumps that are now becoming affordable.

The technique has been trialled and proved effective. It helps boost groundwater supplies for agriculture, provide irrigation for crops during the dry season and to minimise flooding in communities and cities downstream.

In the Chao Phraya River Basin, researchers from Thailand and the International Water Management Institute (IWMI) have explored opportunities for adopting this approach to reduce the scale and costs of conventional flood protection infrastructure.

They found that capturing peak flood flows underground in just one year out of four would significantly reduce the negative impacts of floods on society, including in Bangkok. It would also allow smallholder farmers to grow additional crops in the dry season, generating around US$250 million (8.7 billion baht) per year in export earnings.

This approach has the potential to be applied in other regions in Asia. Initial costs are modest (much lower than large dams) and investments can be returned after 14 years or less. Sound management and institutional arrangements are needed for this technical innovation to succeed.

Another method that governments can consider adopting to increase resilience is the conversion of the edges of existing large reservoirs into productive wetlands.

Efforts to store river flows at large scale in reservoirs has been subject to increasing opposition. In part this has been due to lack of measures to safeguard the existing benefits communities derive from the natural system. Scientists are experimenting with numerous ideas to improve the balance between the natural and man-built systems.

The approach is very simple. As a reservoir empties, specially built low-level dykes hold back a small volume of the water. These small ponds develop into wetlands by allowing aquatic plants to thrive. The dykes also trap fish as water levels drop, providing a breeding area which gives local communities the opportunities to pursue aquaculture.

Initial results show this approach has strong potential for creating new fisheries and can be a low-cost option for increasing diversity of ecosystems in reservoirs built for hydropower, irrigation or urban water supply.

With hundreds of built and planned dams in the region, this has potential to provide communities with an extra source of income and nutrition in times of drought. As with other environmental management measures, it requires more flexibility in dam operations to allow for such multiple uses.

Another innovation is the use of high-tech satellite imagery in forecasting floods to reduce risks to lives and livelihoods. Flood mapping can be a critical element to enable better access to flood insurance.

For poor communities, affordable insurance for crops lost to flooding is rarely available. But as insurers can identify more accurately the recurring patterns of floods in a particular area, they are better placed to offer farmers reasonably priced products for extreme weather events.

Far more attention needs to be given to how Mekong countries can share the costs and benefits of more frequent droughts and floods and how they can cooperate to better manage uncertainty and risks.

Last year, China announced it would alter release water from its dams to further increase dry season flow in the Mekong River, aiming to relieve droughts in countries downstream. This is an example of a positive impact that transboundary cooperation can have.

The question now is how to institutionalise these arrangements for future situations. One approach would be to improve regular sharing of information between these countries, particularly in the dry season, and agree on a protocol for how they will be managed. As climate uncertainty increases, the need for predictability in management of hydraulic infrastructure also becomes more critical.

By prioritising water storage and management at a range of scales as a means to combat climate change, governments and communities will be able to reap a broader set of rewards.

From offering farmers additional income opportunities in times of drought to reducing the damage caused in times of flooding, smart and cost-effective investments in water management can give vulnerable populations a climate-proof future.

Jeremy Bird is director-general of the International Water Management Institute and former CEO of the Mekong River Commission.

Jeremy Bird is director-general of the International Water Management Institute and former CEO of the Mekong River Commission.