Temple drama a tale of ineptness

By the thousands, disciples stream into the Dhammakaya temple, ostensibly to pray but actually to provide human shields for their fugitive sect leader. (Bangkok Post file photo)

Four warrants to search Wat Phra Dhammakaya during the period Dec 13 to 16 have expired. Both the police and officials of the Department of Special Investigation (DSI) simply waited and let the warrants expire, knowing they can get new ones from the court whenever they want.

Technically, they can wait for up to 15 years, at which time the statute of limitations in the cases against Phra Dhammajayo -- the main target of the search and arrest -- will come into force.

Call it a "cat and mouse" game of a different kind. Because, in this case, the mouse is as big as a cat -- and getting bigger each day. Faithful followers have been streaming into the temple every day, purportedly to pray. But many among us know that it is just an excuse to cover up the real motive, which is to protect their beloved mentor, Phra Dhammajayo.

The "human shield" they have formed may well number several tens of thousands, which explains why the police and DSI officials are hesitant to carry out a search for fear of a violent confrontation that could result in undesired consequences.

What about a commando raid? Well, this is out of the question because no one really knows for sure whether Phra Dhammajayo is still in the temple. He has not been seen in public for almost half a year. The temple's spokesman, Ong-art Thamnitha, has said that he hasn't seen the elusive monk for about six months.

Repeated calls for Phra Dhammajayo to emerge from wherever he is hiding and turn himself in to acknowledge the charges against him have been answered by complete silence. The recent demand by his acolytes that he must be assured of bail should he do so is just a delaying tactic to buy him time and to confuse the authorities.

The police and DSI officials appear to be caught in a lose-lose situation. They cannot take the step now of moving in and searching the temple -- nor is this likely for the foreseeable future -- because of the human shield and the possibility of an aggressive confrontation with the monk's followers. Also, no official can say for certain that the monk is still within the temple grounds.

There are drones in the sky above the temple scanning it with electronic eyes and ears. But they seem unable to produce any evidence of Phra Dhammajayo's presence within the compound just as long as he keeps silent and locks himself indoors. Of course it also might be that he is simply not there.

His aides claim that he is sick, has swollen legs and can barely walk. Strangely though, he has refused to be admitted to hospital for medical treatment. Hence, the question marks over whether he is really sick? Or well. 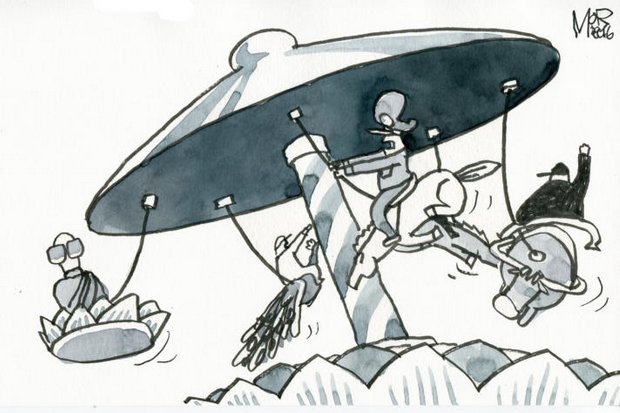 Wat Phra Dhammakaya followers can afford to keep up their vigil at the temple for months. There are several tens of thousands of them at any given time, and they can rotate their personnel ad infinitum.

State authorities do not have the luxury of unlimited time. They can get another search warrant and take no action until it expires, but time will eventually run out. And the longer they wait, the more they will be seen as incompetent and useless -- the clown who talks big but does nothing.

Wat Phra Dhammakaya resembles a fortress with walls of human beings who day-in and day-out, are rotated and replaced. While police and military personnel are deployed to check incoming vehicles, they are not blocking followers from getting into the temple.

Cutting off water and power to the temple is being mulled as an option to wear down those inside. But this move alone, without other measures being implemented such as a blockade to prevent people from getting in, will not have much impact and may instead harden the resolve of the faithful.

One may wonder where is the Sangha Supreme Council, the supreme governing body of Buddhist institutions, including temples, in all this. Why it has it been keeping its silence for so long and to the extent that it appears to be either totally indifferent or simply naïve?

The current unpleasant impasse does not bode well at all for the reputation of Wat Phra Dhammakaya, but particularly for the Sangha Supreme Council. It cannot go on. At some point this disgraceful drama must end.