Safer roads a long way off

Twenty-five people died in the horrific collision and explosion of this van and pickup in Chon Buri, but the record holiday death toll has already passed 370. (Photo courtesy of Sawang Ban Bung Rescue Foundation)

The high death toll from road accidents during the New Year holidays attests to one sad fact: The state's attempts to make our roads safer are a complete failure.

As of Monday, the number of deaths had soared to 367, while more than 3,340 travellers were injured in five out of the so-called "seven dangerous days", starting from last Thursday. It is quite certain the death toll this New Year holidays will outpace that of last year and Thailand will maintain its infamous record as the country with second-highest number of road fatalities in the world.

One crash that gained public attention involved a passenger van and a pickup truck on Ban Bung Road in Chon Buri on Monday which claimed 25 lives -- a single incident which caused many deaths because the doomed vehicles were engulfed in flames. According to police, gas cylinders on board the van fuelled the blaze. 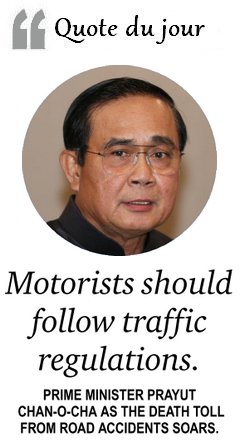 In less than 24 hours, another crash involving a passenger van was reported in Saraburi as the driver swerved into an electric pole. Luckily, there were no deaths, only several injuries. The two accidents heightened doubts about safety measures in the public transport system, especially passenger vans.

As in previous years, drink driving remains the main cause of crashes -- many fatal, according to the Centre for Road Accident Prevention and Reduction. This is followed by speeding, and the sheer recklessness of motorists.

More importantly, that the problem remains unsolved suggests leniency continues in law enforcement, despite promises from the regime that the situation would be better this year. Weeks before the holidays, a number of agencies drummed up efforts, with harsher penalties in place, including higher fines, seizures of vehicles, and suspension of driving licences, which they believed would help reduce the number of road mishaps.

But the high number of accidents, totalling 3,157 as of Monday, shows the efforts have been a waste.

In particular, the van-pickup truck crash in Chon Buri on Monday speaks volumes about the lack of efficiency on the part of the Department of Land Transport (DLT) in achieving safety in the public transport system.

It was initially concluded the van driver, due to pressure during the holiday season, was forced to make so many trips that he lacked rest and fell asleep behind the wheel. It is a tragedy that could have been avoided.

The crash suggests measures for passenger van safety, imposed by the DLT, including limits on working hours for drivers, contain many loopholes.

Needless to say, we cannot make our roads safer when agencies in charge fail to strictly enforce the law, when operators of the public transport system, and buses, vans and boats are allowed to break the law, and when so many motorists care little about traffic regulations, and get away with reckless driving.

To cut the traffic-related death toll, what is really needed is a culture of road safety. That culture can become a reality only when those involved in road safety campaigns make a commitment to it.

It should be realised that when it comes to road safety, flash-in the-pan actions -- or knee-jerk reactions -- that are quickly forgotten when public attention fades -- are a waste of time.

It's time for the authorities to learn from this mistake, or road safety will be a goal that will never be achieved.