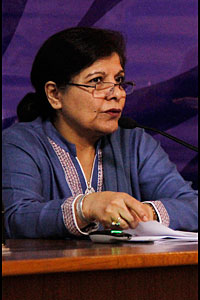 The sight of the prime minister in Wellingtons shows measures can and must be taken to minimise the impact of these disasters. (Photo by Wassana Nanuam)

This month's floods are a worrisome reminder of the increasing uncertainty of extreme weather events. Thailand's flood season usually ends in November, but this year, influenced by a low depression area and a strong northeast monsoon, widespread flooding in the south of the country has killed more than 90 people, affected over 330,000 households, and resulted in widespread asset losses.

Far from being an anomaly, however, the unpredictability of these extreme weather events may become the norm. Using a United Nations global methodology to estimate future disaster losses, we anticipate that average annual losses in Thailand due to floods will reach more than US$2.5 billion by 2030, or 0.65% of the country's 2015 GDP, which is the equivalent of 2.6% of gross fixed capital formation, and 2% of gross savings.

The final impact on Thailand's GDP for 2017 will depend on the duration of the floods. To date, the worst affected sector is rubber, which accounts for 1.5% of GDP and 2.4% of export revenues. The Rubber Authority of Thailand estimates that approximately 10% of the country's rubber production has been lost so far.

As Thailand is the world's largest exporter of rubber, accounting for 38% of world exports, a tighter global market supply may result in an increase in prices, which would somewhat mute revenue losses. Nevertheless, based on climate outlook forecasts which expected the floods to recede by the end of January, a loss of 10 to 15 billion baht could still be expected.

Measures can and must be taken to minimise the impact of these disasters.

The El Nino climate phenomena has resulted in both prolonged drought and floods in quick succession, with poor farmers in particular, bearing the brunt. The exposure of rubber farmers in southern Thailand to severe drought in 2015 and 2016 and the current floods signals a new norm of complex disaster risk.

Poverty is a contributing factor in vulnerability to these disasters because it limits income earning options. The poor are much more likely to cope by reducing spending on education and health, which in turn further weakens their recovery and reinforces the transmission of inter-generational poverty in irreversible ways. Monetary values attached to disaster losses seriously underestimate the links between poverty and disasters.

This is not because of the lack of preparedness on the ground but rather because of the overall content of early warning messages and the way risk is communicated. Often there is a lack of communication on not only the severity of impacts, but also on what specific areas, communities, and assets are most at-risk and likely to be most affected. In other cases, communities may not receive information in time, or they may receive unreliable risk information from various media sources, including social media, which can create confusion.

To prompt action at the community level, risk information needs to be both tailored and standardised. Calibrating these two requirements is central to maintaining the credibility of risk information. Finding the right balance can be challenging, so in recognition of this the Economic and Social Commission for Asia and the Pacific's (Escap) Multi-donor Trust Fund on Tsunami, Disaster and Climate Preparedness has prioritised financial support for initiatives that have built capacity in impact-based forecasting and last mile outreach.

With the intensification of climate change effects, disasters are increasingly trans-boundary phenomena. This demands trans-boundary solutions. Actions taken on a regional cooperative basis can be particularly effective because the benefits are greater than the sum of individual responses.

Consequently, Escap has created a climate risk communication platform, the Monsoon Forum, for improved understanding of climate outlooks and seasonal forecasts in high risk-low capacity countries such as Myanmar, Lao PDR and Cambodia. Through South-South cooperation, Escap will tap into Thailand's experience and knowledge in short and medium range forecasts and early warning communication systems, while continuing to support the integration of innovative tools and techniques for forecasting and monitoring tropical cyclones through the Panel on Tropical Cyclones and the Typhoon Committee, in partnership with the World Meteorological Organisation (WMO).

In partnership with the United Nations Office for Disaster Risk and the United Nations Development Programme, Escap coordinates UN intervention at all stages of the disaster cycle, while Asean and the UN have adopted a Joint Strategic Plan of Action on Disaster Management. These multiple initiatives have undoubtedly helped countries to be better prepared to face disasters.

Escap will further analyse these issues in depth in the 2017 edition of the Asia-Pacific Disaster Report to be launched in October. The report will explore viable and effective methods of building the poor's resilience to disasters, which is key to achieving the 2030 Agenda's aspiration of leaving no-one behind in Asia and the Pacific.

Shamshad Akhtar is a United Nations under-secretary-general and executive secretary of the UN Economic and Social Commission for Asia and the Pacific.

Shamshad Akhtar is an Under-Secretary-General of the United Nations and Executive Secretary of the Economic and Social Commission for Asia and the Pacific (ESCAP). She is also the UN's Sherpa for the G20 and previously served as Governor of the Central Bank of Pakistan and Vice President of the MENA Region of the World Bank.