Sayobphairee Operation 60/1, the biggest trafficking takedown since the army chased Khun Sa back to Myanmar, began with the largest drug bust outside a nightclub urine test-centre.

On March 23 last year, police got a tip and searched the Bangkok-to-Butterworth train as it chugged south. They quickly arrested 15 Malaysian men between Hua Hin and Surat Thani. From that bust came more arrests of Malaysians and seizure of 508kg of pills and crystal methamphetamine, and just over 60kg of pure, white No.4 Double UO-Globe heroin. 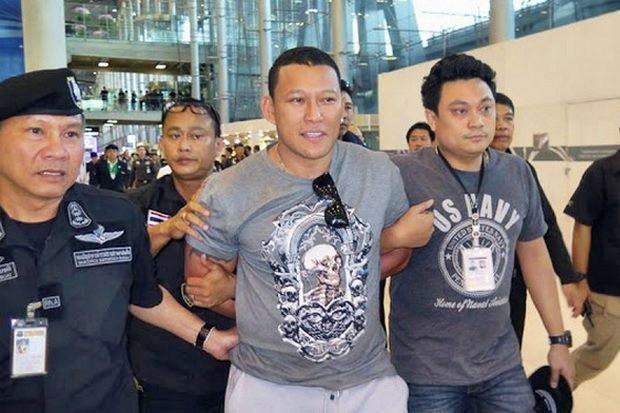 Drug agents ambushed Xaysana Keopimpha at Suvarnabhumi airport on Jan 19 and took him into custody for interrogation. He has not been seen in public since. (Photo provided by Thai News Agency)

The drug syndicate began to collapse. As drug seizures continued to pile up in the evidence rooms and as herds of mules packed remand prison cells, the Xaysana Keopimpha gang was coming down, and the leader apparently was clueless about it.

As surely as the ankle bone's connected to the shin bone, the cascade of Malaysian mule arrests that began on that train last March eventually led to Suvarnabhumi where, on Jan 19, drug agents from three top agencies put the handcuffs on Mr Xaysana and frogmarched him out. Stopping just inside the airport doors for a few photographs, agents drove Mr Xaysana to the Office of the Narcotics Control Board (ONCB), where he was placed in a chair in the interrogation room. He has not been seen in public since.

This is an experienced, powerful trafficking ring. If the guest of the narcs is only half the bad man they think he is, he is the most successful drug lord of a truly impressive list of drug lords -- the kingpin of kingpins.

But in criminal terms he also is fungible. While the arrest of a kingpin is a major accomplishment, the gang will get a new Laos connection and resume operations unless there are more arrests of big fish.

Agents of the ONCB and the Narcotics Suppression Bureau are enjoying schadenfreude with a string of arrests. The parade of B-list celebrities and race-car groupies puts the druggies on the front page, a good formula for budget increases.

Mention just one name to see smiles disappear: Usman Suleiman aka Usaman Salaemaeng in Thai, long suspected as the trafficking kingpin in the deep South. The ONCB will give you 2 million baht if you can turn him in, but no one will admit even seeing him for nearly 10 years. He has had an outstanding arrest warrant for the past five.

The army drove Khun Sa out of northern Thailand and into Myanmar, declaring victory in 1982. But Golden Triangle drug production and smuggling is bigger today than it ever was. And the recent victory over the Laos-Thailand-Malaysia connection will be short-lived without major follow-ups. Narcotics police and agents have been tracking it for years, at first without even realising the drug couriers they busted were part of the big-picture trafficking gang. 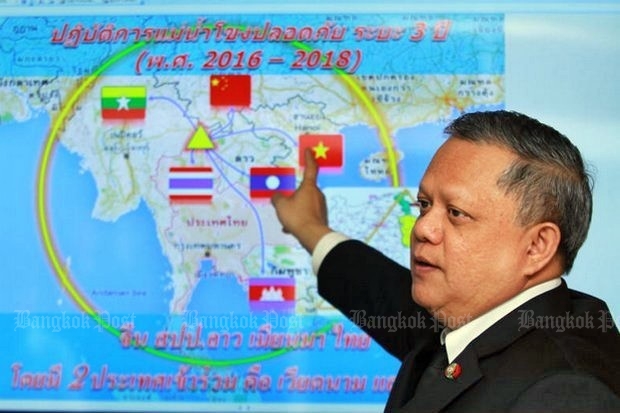 Sirinya Sitdhicchai, secretary of the prime minister's Office of Narcotics Control Board, briefs the media on the drug trafficking network. (Photo by Somchai Poomlard)

But the biggest tell about the last two weeks of front-page treatment of drug trafficking may be the dog that isn't barking. Not a single green shirt has been seen. When Mr Xaysana was (literally) taken down and taken into custody at Suvarnabhumi on Jan 19, no military security was on hand.

The drug trafficking that narcs currently put on Mr Xaysana's back runs from Laos to northern Thailand, from there to Bangkok, and then into the deep South. Once inside the military's exclusive bailiwick of southernmost provinces, the product moves across the border into Kelantan state.

Of course, just because there have been rumours about a direct military-separatist drug-running link in the deep South for 40 years doesn't make it true. Neither does the failure of the military to track down the very well-known trafficking king Mr Usaman. There are plenty of high-profile criminals the army hasn't neutralised.

Still, the non-barking canine is unnerving. The military, 100% absent from the unravelling of Mr Xaysana's operation, has been deputised for almost two years. The prime minister himself is officially the chief law enforcement officer of the land.

Yet. In the 17 days since the arrest of the Lao drug lord, there hasn't been a peep from Gen Prayut, from his top security aides and ministers, or from the 4th Army, where tonnes of drugs have been marshalled and shipped on to the southern neighbour. Try to remember when you last saw a major criminal show where green shirts didn't horn in on the photo ops, or at least comment wisely on the case.

It's the first prominent crime in which no military man has emerged in public with an opinion. Keeping their distance and their private thoughts is not evidence, yet it is extremely curious when the country's leaders stay silent as a clam.