The Big Issue: Those pesky tourists

If you need to watch a rant or even start a hot dispute, pick an expatriate, any expat, and say "double pricing".

It happened again this week, but, uniquely, as Thai vs Thai. Here is the short version. 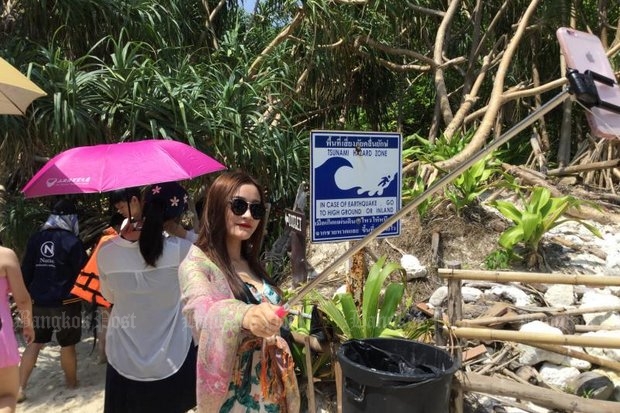 Chinese tourists at Koh Phi Phi Marine National Park in Krabi have selfie sticks and typhoon shelter instructions, and now they're so brazen they even want to pay the same as Thais to enter the park. (Photo by Anchalee Kongrut)

Tourist operators inside Phi Phi National Park complained that foreign visitors were being fleeced by park entrance fees of 400 baht per head when Thais pay 40. They politely and then impolitely, with a blockade of park gates, demanded the foreign fleecing be dropped to 200 baht, still 500% above local pricing.

Park chief Sarayut Tantien explained, repeatedly, that if he wanted to -- which he definitely does not -- he couldn't change the rip-off, which is set by people in air-conditioned government offices in Bangkok. He said he and the Department of National Parks need the money for maintenance, but if foreign tourists didn't like it, there are airplanes leaving Thailand frequently.

Claiming this was more job stress than he had signed on for, Mr Sarayut then demanded a transfer out of Krabi to a park with friendlier people.

For 10 years now, the government has been blatantly upending tourists at park entrances and shaking them until large amounts of money fall from their pockets and pocketbooks. Raise this in an internet forum or coffee shop if you wish to find foreigners who claim this would never happen in their country.

Multi-tier pricing is an international custom, but the form practised in Thailand raises complaints on three issues. These are that tax-paying expatriates are treated as rudely as tourists, that the price difference is semi-criminally hidden by printing the Thai prices only in Thai script, and that while double pricing by private firms and vendors is dreadful, it is indefensible when the government does it.

Of course, the Krabi boat operators protested about dual pricing because they claim to see foreigners staying away over the 1,000% fee difference. It was the first time Thai businesses showed concern. 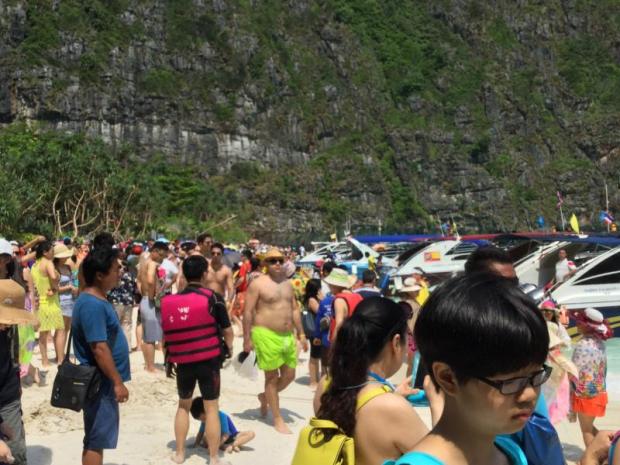 Nothing happened but by coincidence the kakistocracy was also putting the boot in to foreigners in other matters.

Did you know that foreign tourists are the reason Thailand is a pirate's haven?

Staff of Sports and Tourism Minister Kobkarn "Tourists Come Here For Our Beautiful Culture" Wattanavrangkul gave the reasoning. It gets arguably esoteric.

Foreign tourists come to Thailand. When in Thailand, they shop. When they shop, many of them buy pirated software and movies, counterfeit brand-name clothing and fake handbags. As a result of foreigners coming to Thailand, Thailand is listed every year among the world's worst pirates and protectors of intellectual property.

Ms Kobkarn's officials began to fan out nationwide last week to tell tourism officials and group organisers to stop taking foreigners to places that sell pirated and counterfeit goods, wherever they are, so that Thais will no longer be forced to sell such goods and so Thailand can get off the "dirty dozen" list of pirate nations.

Ms Kobkarn's ministry officials did not suggest just where tourists should shop in order to avoid all illegal goods. Years of research in Bangkok and the provinces alike, and we haven't found such a place. But spare a tear for Thais forced into the piracy industry by foreign tourists.

Finally (for today). Something else that tourists do is they create hanky-panky with attractive young Thai men and women. Only tourists do this or, to put it another way, only tourists get credit for doing this, and thus horrified civil servants can pretend to be shocked, with Pattaya as the focus of outrage in recent years.

Like piracy that was OK until the annual US lists of shame, Pattaya jiggery-pokery is OK until someone points at it. Last week, that was two London (England) newspapers, awarding Pattaya the not-too-coveted title of Sex Capital of the World.

This will require extensive social engineering of the foreign tourists who have lured young Thais into the industry. Tourists are to be guided to follow and feed their basic inner lust to see the temples and visit nature.

Taweebhong Wichaidit has volunteered his Designated Areas for Sustainable Tourism Administration of the Prime Minister's Office for the job of ridding foreigners of desiring a piece of all that Pattaya hanky-panky. He's going to promote attractions near Pattaya like an "authentic" Chinese village and a peaceful Buddhist-Muslim-Christian village and so on. Over time, Mr Taweebhong figures tourists will come to eschew physical pleasure and make Pattaya great again.

All of which leads to a rather obvious question: The prime minister has a Designated Areas for Sustainable Tourism Administration?

Spending during the ongoing Euro 2020 is forecast to stay tepid as the continued Covid outbreak has sapped consumer purchasing power.

England get the job done with 1-0 win over Czechs

LONDON: England delivered an efficient but hardly scintillating display to beat Czech Republic 1-0 with an early Raheem Sterling header on Tuesday to advance to Euro 2020's last 16 as Group D winners, with the Czechs through as one of the best third-placed teams.

Can we build back better by Oct 15?

Govt dials in to 'reopen' from Planet Clueless