The current military government has adopted "defence diplomacy" when it comes to handling international relations. Such a diplomatic approach has helped it forge closer ties with China, resulting in strengthened cooperation on a new defence and weapons industry in Thailand along with planned purchases of Chinese armaments and armoured vehicles including submarines.

The defence diplomacy has brought about joint cooperation to develop a defence and weapons industry in Thailand including a maintenance and production centre for Chinese weapons and spare parts for armoured vehicles.

The army has signed a 4.9-billion-baht deal with China to purchase 28 VT-4 tanks expected to be delivered next year. An additional purchase of 100 tanks is also envisaged. The army's existing 30-year-old armoured command and control vehicles also require spare parts.

"China's Ministry of National Defence intends to set up a weapons maintenance and production centre in order to provide the [Thai] army with spare parts. This is to ensure we won't have problems with spare parts supplies," Gen Prawit said.

There is also cooperation on research and development in which China will pass on knowledge and the latest technology associated with Chinese armaments used in Thailand to Thai military officials.

"We have to admit that China's development of technology used for producing weapons has advanced. Its pricing of these weapons is also reasonable and friendly," Gen Prawit said.

Gen Prawit himself has taken this diplomacy seriously. He has led a team that includes the army, air force and navy chiefs to inspect a potential site for the maintenance and production centre at the Army Ordnance Department in Nakhon Ratchasima. Future trips are also planned for other possible sites in Chon Buri and Nakhon Sawan.

"The plan has progressed well," Gen Prawit said. "All the three armed force chiefs have agreed to it. We will soon adjust our defence structure by integrating existing maintenance and production centres of all the armed forces under the same umbrella of the Ministry of Defence. This is part of army reform."

Drones and marine aircraft are among the items to be produced by this centre for domestic use and sale to security agencies.

A source at the Ministry of Defence revealed that the establishment of this maintenance and production centre will also benefit three S26T submarines the navy has planned to purchase from China. The first submarine will be procured by this year at a cost of 13.5 billion baht. The second and third submarines will likely be acquired in 11 years.

One submarine will be stationed in the Gulf of Thailand and another in the Andaman Sea. The third submarine will be used for training of navy personnel and a replacement for each of the two vessels whenever it undergoes maintenance. The navy also plans to build a dock and a ground control station on each coast. Gen Prawit has made it clear he supports the navy's submarine procurement plan.

The strengthened defence cooperation with China has inevitably raised the question of whether the Thai government and the military prioritise their defence relations with China over those with the United States. China has offered understanding and support to Thailand as it has undergone a "transition period" since the 2014 coup. The US, on the contrary, has been critical of the coup and even cut back on military aid. "We don't favour China because we have maintained relationships with all countries including China and the United States," insisted Gen Prawit.

As Thailand's roadmap to democracy becomes clearer with a general election expected to take place next year, the US has recently softened its stance toward the military government.

The latest Cobra Gold drill which ended last week reflects the continuing strong defence ties between the two nations. The US helped promote this year's drill via its Twitter and Facebook accounts while allowing greater access to all areas for journalists covering Cobra Gold. Two years ago, it restricted the media's access. 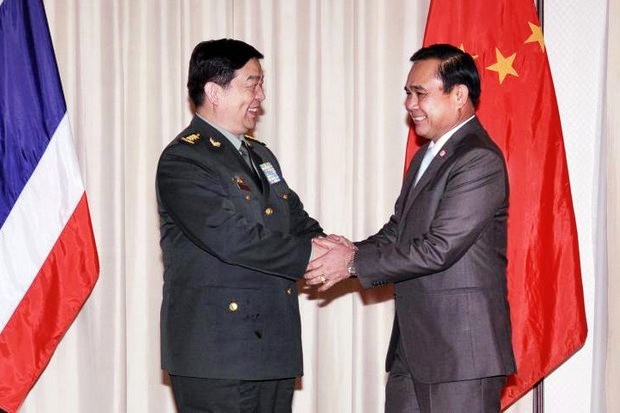 US Pacific Commander Admiral Harry B Harris Jr, who launched the drill in Sattahip in Chon Buri, also insisted that US President Donald Trump has stressed the importance of Thailand as the US's regional defence hub. The US also invited 1st Army commander Lt Gen Apirat Kongsompong and those in other commander positions to a one-week visit to US military bases.

The military sees this positive move as the US's strategy to counter Thailand's strengthened defence ties with China.

Gen Prawit insisted that Thailand has also held talks with Ukraine and Russia on weapons procurement plans but they have not materialised.

"The fact that China will set up a maintenance and production centre in Thailand doesn't mean that it's mandatory for us to buy weapons from China. We will still have to make decisions on a case-by-case basis," army chief Chalermchai Sitthisart said.

Her Royal Highness Princess Maha Chakri Sirindhorn will be named Goodwill Ambassador again by the United Nations Educational, Scientific and Cultural Organization (Unesco) for her contributions to the empowerment of minority children and the preservation of their intangible heritage.

PM Prayut is expected to use a general debate to showcase the government's achievements.