Future of ThaiPBS hangs in balance as review nears
Opinion

Future of ThaiPBS hangs in balance as review nears 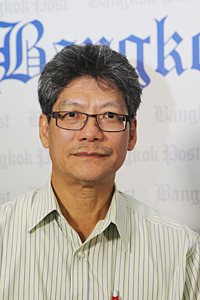 Somchai Suwanban Director-general of ThaiPBS from 2012-2015

Thai public service broadcaster, ThaiPBS, is now under the spotlight following a scandal that threatens its future. (Photo by Pornprom Satrabhaya)

The future of PBS in America is reported to be under threat since Donald Trump's hawks took over the White House early this year, but in Thailand, the future of this country's budding public service broadcaster is now in jeopardy for other reasons.

The CPF debentures fiasco at the (sin) tax-funded Thai public service broadcaster, ThaiPBS, has come at a time when the legislation giving birth to the organisation is up for review. The controversy put the spotlight on the corporation's governance. Legal experts are worried the CPF investment could have breached the law.

The disputed investment scheme, which led to the resignation of its director-general, Krisda Rueangareerat, barely a year into his job, raises harsh questions about the corporation's future. The controversy also exposes sheer incompetence, poor governance and judgement, within its governing body, the policy board members selected to hold office from 2014/15.

The trouble began with Mr Krisada's surprise appointment to head the broadcaster in February last year, only months after his resignation from the other (sin) tax-funded Thai Health Promotion Fund (Sor Sor Sor). The decision to offer him the ThaiPBS job astounded the media industry.

Ironically, his departure from Sor Sor Sor was also triggered by the still continuing anti-corruption investigation into alleged questionable financial transactions. Despite this concern, the ThaiPBS policy board still offered him the top position at the media corporation, whose operation is multifaceted and with diverse remits.

The smooth "fortuitous" appointment of Mr Krisada was made possible only after the 2014/2015 policy board decided to remove one key prerequisite for the role -- practical editorial and media experience. The policy board was accused by its own staff and media reformers of bending the rules, possibly breaching the law in order to ease Mr Krisada into the job. Without doubt, since February 2016, both the policy board and their new director-general have been skating on thin ice.

It was a disaster waiting to happen.

This blunder is undermining ThaiPBS's brand value and public trust, threatening its survival. ThaiPBS staffers are wondering who will be accountable for throwing their organisation into such disrepute, making it vulnerable to outside predators.

But the deeper question is not about personality, and it may well be that Mr Krisada is not personally to blame. He could also be a victim of shadowy and naive strategic manoeuvring. As seen by many well-wishers, the apparent amalgamation of Sor Sor Sor and ThaiPBS, have inadvertently rendered both organisations weakened and badly discredited. More importantly, this unfortunate fiasco has made defending the idea of "earmarked" tax a harder job.

ThaiPBS, whose editorial credibility has always been questioned, is now sinking further. The broadcaster appears to be sliding closer to government controlled media editorially, and in audience size. It is now obvious that the loyalty of ThaiPBS's audience dissipates, when dumbed down content is thrown at them. The organisation resources have been mobilised at times to support health promotion events, while news and current affairs are diluted from seriously challenging those in power.

Furthermore, overpriced celebrity-led programmes have failed miserably to attract the expected audience. The public service broadcaster has unwittingly alienated its core audience, resulting in a steep drop in viewers. It is the biggest drop in the corporation's history. Again, when the grand plan turned sour, the policy board and top managers showed no remorse but turned against dissenting voices inside the corporation threatening disciplinary action, without realising the organisation is publicly funded and subject to open scrutiny.

Media reformers and key promoters of public service broadcasting in Thailand are asking -- who will be responsible for this wretched strategic blunder at the crucial time of the ThaiPBS Act Review, which is similar to the BBC Licence Fee Review? Many at ThaiPBS and media reformers are clearly worried about its survival.

They fear that many reform advances since the "May 92 Uprising" will be rolled back at a time when the quasi-independent media and telecom regulator, the National Broadcasting and Telecommunications Commission (NBTC), is also vulnerable under the current authoritarian climate.

The ThaiPBS Act was a product of the pro-democracy struggle following the "May 92 Uprising". It received a big push from the Bangkok Declaration issued during the Asia Media Summit supported by the AIDB and Unesco, when Thailand was the host in 2003. The declaration committed signatories to promote the establishment of a national independent public service media in their respective countries, and Thailand was highly credited in the Asia-Pacific region as the first country to do so.

More importantly, ThaiPBS is part and parcel of the May 92 Media Reform Movement, it is the broadcaster's moral duty to support NBTC remits to devolve and restructure broadcast spectrum resources to a more equitable arrangement. ThaiPBS's mission includes sowing the seeds for citizen journalism and nurturing community media aspirants, as well as championing greater access for less privileged and disabled audiences. It is now doubtful if these missions will ever be realised.

Deputy Prime Minister Wissanu Krea-ngam then represented the Thai government committing Thailand to this declaration. It is important to recognise that a sustained and secure future for ThaiPBS is a positive credential for Thailand's democratic and transparency rating abroad.

It is vital to defend this budding public service broadcaster by removing "bad apples" from the basket. ThaiPBS ought not be used as a platform for political machinations, or for any grand social ideological experiments. Nor should it be used as a personal fiefdom by policy board members.

Many at ThaiPBS are reportedly living in fear of retribution for speaking out against unjustified tax money spending, cronyism and blatant breaches of good governance. Budgetary controls and financial disciplines, introduced to maintain transparency and prudent use of tax money, have been reportedly weakened to allow big spenders easier access to public money.

Sadly, following the change of management in October 2015, attitudes to financial discipline have markedly changed and it is now apparently easier to squander tax money, because "value for money" test tools introduced in 2013 have been abandoned.

The more immediate threat to ThaiPBS's survival may come from an internal feud involving some current policy board members who blame each other for leaking the CPF debenture purchase to the press. This is not so much a surprise, as in early 2015, one board member openly accused another of stealing corporation property and nepotism. The investigation into this accusation resulted in subtle vendettas which led to woeful exasperation among senior staff.

For years, many people inside and outside ThaiPBS have contributed much to building a sustainable and worthy public service broadcaster. Unfortunately, its employees now feel a few individuals have used the corporation as a platform to seek political influence, and advance their shallow self-serving agendas.

A recent court ruling against a member of the ThaiPBS Audience Council, also a local politician, exposed the extent of policy board cronyism and political exploitation. His involvement in a series of questionable expense claims on tax money at the Audience Council raised further concerns about financial transparency inside the broadcaster.

ThaiPBS will soon celebrate its 10th anniversary. The organisation boasts a team of dedicated and professional employees. They have survived testing times during political upheavals, showing their professionalism in tough times when the country suffered massive natural disasters.

ThaiPBS can and will prevail, because its hard-working workers understand that the country deserves a strong, independent and trustworthy public service broadcaster.

But in order for ThaiPBS to survive, it is now imperative for staff, stakeholders and media reform advocates to come together and open a public discussion to reflect on what went wrong, who is accountable and plan a visionary and shrewd strategy to defend it in this crucial review. After all, ThaiPBS is funded by the public, and is not a private entity.

Time is running out.

Somchai Suwanban was director-general of ThaiPBS from 2012-2015.

Somchai Suwanban was director-general of ThaiPBS from 2012-2015.