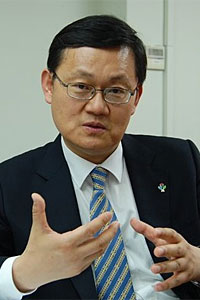 South Korean President Moon Jae In speaks during his inauguration ceremony at the National Assembly in Seoul on May 10. (AP photo)

South Korea's new president, Moon Jae-in, a former human-rights lawyer representing the centre-left Democratic Party, has his work cut out for him. Though North Korea's increasingly provocative behaviour will likely continue to dominate headlines, the success of Mr Moon's presidency will hinge largely upon his economic policies.

The good news for Mr Moon is that both the global and South Korean economies are showing signs of recovery. Korean exports, led by semiconductors and petrochemicals, have recorded positive growth for six consecutive months. In April, total exports were 24% higher than a year earlier. The main stock price index has returned to its all-time high.

Of course, North Korea's behaviour, beyond its obvious security implications, has an impact on South Korea's economy. But an easing of regional tensions -- a process that could begin in meetings with US President Donald Trump and Chinese President Xi Jinping and possibly progress to the resumption of talks with North Korea -- would lead to recovery in consumer and business sentiment.

That recovery, however, would be constrained by the deeply embedded structural problems that continue to beset South Korea's economy. Far from fostering new and innovative enterprises, the country's economic system remains dominated by giant politically connected, family-owned conglomerates, the chaebol. Stagnant productivity in the services sector has hampered overall productivity growth, while the skills mismatch has worsened, with the education system failing to prepare students for a rapidly evolving labor market.

So far, government policies have done little to increase growth potential and jobs. Policymakers have also failed to boost the efficiency of the public and financial sectors, or to address mounting demographic pressures caused by low birth rates and rapid population aging. Mr Moon hopes to change that with a three-prong strategy he calls "J-nomics".

The first prong is public-sector job creation. Specifically, in order to lower the youth unemployment rate, which currently stands at 11.2%, Mr Moon pledges to create 810,000 jobs in the public sector -- including 174,000 civil-service positions in national security and public safety and 340,000 in social services -- over the next five years. He has also promised to convert 300,000 irregular public-sector workers into permanent employees.

The second prong of J-nomics is an expansion of the social safety net for Koreans of all ages. Mr Moon has pledged to provide monthly subsidies worth 100,000 won (3,070 baht) to parents with a child up to five years of age. Unemployed young people (aged 18-34) would receive 300,000 won per month, as would anyone 65 or older who is in the bottom 70% of the income distribution. He also plans to expand state-run daycare centres and extend parental leave.

The third prong of J-nomics is chaebol reform, aimed at limiting the conglomerates' dominance. To this end, Mr Moon has vowed to separate politics from business, including by ending the long-standing practice of granting government pardons to convicted chaebol bosses -- a move that most immediately affects Samsung Group Vice Chairman Lee Jae-yong, who is currently jailed and standing trial for bribery and embezzlement.

Mr Moon also promises stricter regulations to prevent chaebols from entering financial businesses and recklessly expanding into sectors better suited to smaller firms. And, in order to give minor shareholders more influence, he plans to introduce a cumulative voting system for electing companies' boards of directors.

But, after nine years of conservative rule, Mr Moon will not be able to simply swoop in and implement his agenda. In fact, with his Democratic Party holding only 40% of the 299 seats in the National Assembly, he will have to win support from centrist parties and even the conservative opposition. Moreover, he will need broader public backing.

To succeed, Mr Moon will have to reexamine carefully the effectiveness and feasibility of his campaign promises, identify the most promising measures, and avoid the most obvious pitfalls. When it comes to public-sector job creation, for example, the main problem to consider is the long-term financial burden that such large-scale hiring could create.

A better approach might be for the government to create fewer jobs in the public sector and work harder to encourage private companies to hire more young people, such as by providing financial incentives. Mr Moon's government can also contribute to private-sector job creation by easing regulations, helping small- and medium-size businesses to thrive, and ensuring a flexible labour market, in which full-time employment is not excessively protected and performance-based wage increases are applied.

Yet youth unemployment is far from South Korea's biggest employment-related challenge. After all, in just six years, the number of young people (aged 20-29) in South Korea is expected to decline sharply, by as much as 390,000.

The bigger challenge is the labour shortage that will emerge when the "baby boomers" retire in a few years. To overcome it, South Korea will need a comprehensive plan for the continued development of its human resources, including expanded vocational education and training for young job seekers.

As for the expansion of the social safety net, J-nomics is not very clear on how to finance it. The government plans to raise the top rate of personal income tax; reduce most deductions, especially for large enterprises; and perhaps even increase the corporate-tax rate. But such tax reforms are likely to face strong resistance: about half of all South Korean households and businesses paid no income or corporate tax in 2014.

Finally, there are real doubts about how far Mr Moon can go on chaebol reform. Previous administrations have failed to reform chaebol ownership structures or curb their market power. With his party holding far less than a majority in the National Assembly, Mr Moon may have a hard time breaking the mold.

After the political scandal that led to the impeachment of Mr Moon's predecessor, there is growing public momentum for reform in South Korea. One hopes that Mr Moon makes the most of it. Project Syndicate

Lee Jong-Wha is Professor of Economics and Director of the Asiatic Research Institute at Korea University. His most recent book, co-authored with Harvard's Robert J Barro, is Education Matters: Global Gains from the 19th to the 21st Century.

Lee Jong-wha, professor of Economics and director of the Asiatic Research Institute at Korea University, was a senior adviser for international economic affairs to former President Lee Myung-bak of South Korea.