Silom Road, 1997. The baht has collapsed and a very unpopular IMF is imposing massive restrictions on the country. (Reuters photo)

The devaluation of the baht in July 1997 was a pivotal moment for Asia and the world, not least because it triggered the onset of a major financial crisis, with a contagion that for the first time spread globally. The crisis also brought about an important rebalancing in the global economy as countries in Asia underwent a long and painful period of reform only to emerge much stronger 10 years later to withstand the effects of the global financial crisis of 2008 and lead the world economy in terms of global growth. It was a remarkable story of a successful crisis, a story that needs to be understood and celebrated.

The 1997 Asian financial crisis was the first of its kind. It was a financial markets-led crisis in the era of globalisation, driven by capital flows and triggered by a sudden loss of investor confidence, while the international financial community then was not adequately equipped to deal with. The crisis highlighted the importance of risks arising from capital flows, leveraging through the banking sector, balance sheet vulnerabilities, and capital outflows. And for the first time, the crisis demonstrated the importance of speed and the contagion between economies. This was totally different from past crises that were mostly fiscal-led that ended with balance of payment difficulties.

The crisis also highlighted the danger of excessive indebtedness as the root cause of financial crisis. Regardless of whether the debt is sovereign, corporate, or even household, if it is excessive and the debt-service capacity is in doubt, then a financial crisis will happen. And, as the global financial crisis of 2008 testified, a financial crisis can happen in any countries, in advanced as well as in emerging markets economies. It can happen in countries with well-developed or under-developed financial markets. It can happen in countries with fixed or flexible exchange rate regime, and with or without large levels of international reserves. Once the country has taken on too much debt and its capacity to service the debt is over-stretched, a financial crisis will happen. Because of its central role in debt creation and leverage, the financial system thus lies at the heart of policies to minimise and manage the risk of crisis. Accordingly, building a strong, resilient, and efficient financial system has become a key policy agenda world-wide.

The Asian financial crisis also demonstrated for the first time the speed and importance of contagion between countries, made possible by capital flows and change in investor confidence. With contagion, the risk of financial crisis to a country is not limited to its own vulnerabilities, but can be a result of market contagion that turns the underlying weaknesses into a crisis. This means, under globalisation, a financial crisis is no longer an isolated individual country problem but a collective problem that needs to be tackled collectively -- through an organised regional or global body whose job it is to prevent and resolve financial crises. Twenty years ago, Asia lacked such a mechanism. 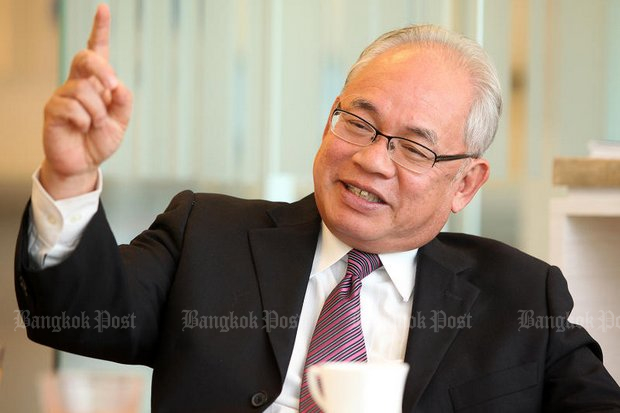 Market stability returned quickly after the onset of the crisis as sharp correction in the exchange rates and asset prices prompted a return of foreign capital to the region beginning in 1998. The reversal of foreign capital helped normalise liquidity and set the stage for a return to growth, led initially by exports. With growth stabilising, the region embarked on a comprehensive reform aimed at strengthening the foundation for growth and reducing future risk of crisis. Reform efforts were region-wide and focused on exchange rate and monetary policies, a financial regulatory and supervisory framework, corporate governance, and a regional surveillance and financing mechanism for crisis prevention and resolution.

In Thailand, the reform led to the adoption of a managed float exchange rate regime and inflation targeting as the new monetary policy framework. This introduced greater flexibility and transparency into the policy process and laid the foundation for a credible and disciplined macroeconomic policy. For the financial sector, a comprehensive reform of the regulatory and supervisory framework was implemented, encompassing risk-based supervision, consolidated supervision, and a phased implementation of the IAS39 accounting standard. The reform also institutionalised financial stability-focused policy framework with macro-prudential as policy tool, streamlined financial institutions under a one-presence policy, and strengthened the country's financial infrastructure through further development of the payment system, the bond market, and corporate governance. A new Bank of Thailand Act and a new Financial Institutions Act were enacted to enhance the regulatory power and the functional independence of the Central Bank.

Another reform was the setting up of a regional surveillance and financing mechanism by Japan, China, South Korea, and the 10 Asean economies -- known as the Asean+3 countries -- that focused on crisis prevention and crisis resolution. Started in 2000, the collaboration progressed steadily into a Chiang Mai Initiative Multilateral (CMIM) and the establishment of AMRO (Asean+3 Macroeconomic Research Office) in 2011 to conduct macroeconomic and financial risk surveillance of the Asean+3 countries and coordinates the financing mechanism in the form of multilateral swap totalling US$240 billion. To date, no country has drawn from the facility.

Looking back, the management of the Asian financial crisis compares favourably with the global financial crisis of 2008. In the latter, the economic and financial conditions of many of the key affected economies have yet to return to normalcy 10 years on. Contrastingly in Asia, the comprehensive reform has helped rebuild the growth foundation and has allowed the regional economies to continue its development in spite of a less favourable global economic climate. This is indeed a successful story of crisis, a story that deserves to be told and celebrated.

Thailand: In the eye of the coming storm