Last Monday a female Chinese reporter asked me why most of the Thai media have a negative attitude towards the Thai-Sino high-speed railway project given the fact that the innovative high-tech train will bring tangible benefits to Thailand and its people along the routes.

My initial response was "that is a really good question". Then I paused to think and said that it was not because we disliked or denied China's high-speed railway technology. As for myself, I have had the chance to take the high-speed Chinese trains from Beijing to several provinces and was impressed by the experience. Recently, I took the train from Beijing to Tianjin, which is about 120 kilometres from the Chinese capital. The train travelling at a maximum speed of 350km/h took only 30 minutes to reach Tianjin.

We know that the high-speed train project is a part of Beijing's massive "One Belt, One Road" initiative to increase trade and infrastructure links with other countries in Asia. However, what we doubt is the pressing need for Thailand's military government to rush into invoking Section 44 to override objections to the Chinese-built railway, and announcing it through the Royal Gazette.

Unavoidably, the Thai media stood up together to question the transparency of the ambitious venture as we were afraid that the government, in its attempts to speed up the project, would end up serving the interests of China and its private sector without carefully deliberating on the benefits that Thailand and its people would actually reap from the exercise.

For an example, look no further than Laos. We do not want to see Thailand being in the same situation as our neighbouring country whose government has given 99-year land concessions and the transfer of land use rights along the railway routes in Laos to Beijing and its private sector, sparking problematic land issues in recent years.

Frankly speaking, we fear worse than that. We are apprehensive to the extent that Beijing would plot a long-term economic-and-political takeover of Thailand by encouraging their men to settle permanently in our country and enjoy all the benefits normally earmarked for Thai nationals only.

Secondly, I also told the female Chinese reporter that since the news of Prime Minister Prayut Chan-o-cha invoking Section 44 of the interim constitution to cast aside all legal impediments slowing the project started churning headlines a few weeks ago, we have not seen Beijing make any attempt to explain the significance of the project.

We seek clarity in details of the project for the sake of transparency and accountability. We really need to hear strong affirmations from China's President Xi Jinping and Beijing government that they do not want anything special from Thailand under this "regional railway cooperation" other than helping Thailand with the high-tech railway.

We expect Beijing to portray itself as a giver and not a taker. If that is asking for too much, how about an assurance that Beijing will give Thailand more and take less from the country to confirm remarks by Transport Minister Arkhom Termpittayapaisith, who said late last month that China will only oversee rails and trains plus the signalling and operating systems.

And Mr Arkhom also confirmed that the rail project would not result in Thailand losing its sovereignty or territory to China, as feared. Furthermore, he said the project belonged to the Thai government, which had the country's best interests at heart, while insisting that no land would be handed over for China to manage.

It was reported previously that China requested the holding rights for land along the tracks for commercial purposes.

Through this article, I am calling for a balanced reporting from the Chinese media in the true spirit of journalism. As a reporter, I have carried out my journalistic duties in an independent manner. I have educated readers and the public about events and issues and how they affect their lives. I have always realised that I am duty-bound to find facts about all questionable issues so the public is conveyed information from all sides.

That's why I begged the Chinese reporter to tell her journalism peers in Beijing to help interview all Chinese stakeholders and ministers about various issues related to the Thai-Sino high-speed railway project so that the Thai media and the Thai people can develop a clear understanding of their points of view.

I think it is an absolute necessity for us to consider and analyse the pros and cons of the project. We need to know what lasting benefits the project will bring, especially economic benefits to the areas and provinces along the rail route. We need to know exactly how Beijing will not take an advantage of Bangkok via this project. And, moreover, we need to be aware of what social problems can grip the country if this project comes true soon.

In Thailand, what we have heard over the past weeks are just Prime Minister Prayut's reiterations, saying that the Thai-Chinese high-speed railway project has to go ahead in his administration while insisting that his Section 44 order to speed up construction is in the country's best interests, and not a special favour to China.

This begs the question of how much we can believe and rely on this one-sided information. We have not seen Beijing come out and say something about the project after Thailand's use of Section 44 to deal with obstacles impeding the project. If they did, I must have missed it because of my lack of understanding of the Chinese language.

Gen Prayut invoked Section 44 to expedite the 179-billion baht Thai-Chinese high-speed railway line between Bangkok and Nakhon Ratchasima and enable work to begin this year. The project will be divided into two parts and invested in accordingly -- civil and infrastructure work, which will account for 75%, and acquisition of rails and trains, which includes signalling and operation systems, accounting for the rest. The civil works will be carried by local contractors, while the second part will be done by China.

The Transport Ministry expects to propose the contract to the cabinet for approval soon. The construction is likely to commence in August or September.

The female reporter with whom I had the conversation was among a group of six correspondents working for Chinese news agencies in Thailand, who were invited by the Thai Journalists Association (TJA) last Monday to discuss problems and obstacles they have faced while working in Thailand with a group of Thai counterparts.

However, the session at the TJA office was hijacked by a cordial and constructive discussion on the Thai-Sino railway project. The two sides had the opportunity to get to know each another, discussing effective methods on how best the Thai and Chinese reporters can communicate more effectively to make the relationship stronger and clear controversial issues facing the two countries such as the Thai-Sino high-speed railway project.

All Chinese media outlets are obviously state-run. I am absolutely sure they have all been briefed by Beijing to protect China's interests outside the country. We as the Thai media also have the same duty to protect Thai interests from being exploited by other nations. I see that a win–win game must be designed in a way that all participants of any such project can profit from it in one way or the other.

During the talk at the TJA, I found out that most of the Chinese reporters can speak decent Thai, while some are quite fluent. For them, it is a world without language barriers and no surprise that Beijing understands well what Thais and the Thai media think about the high-speed train project, while we, the Thai media and the Thai people, know a great deal less.

I am quite certain that opposition to the Thai-Sino high-speed railway project will not fade away, probably it will grow everyday if the Thai public can sense irregularities in it. 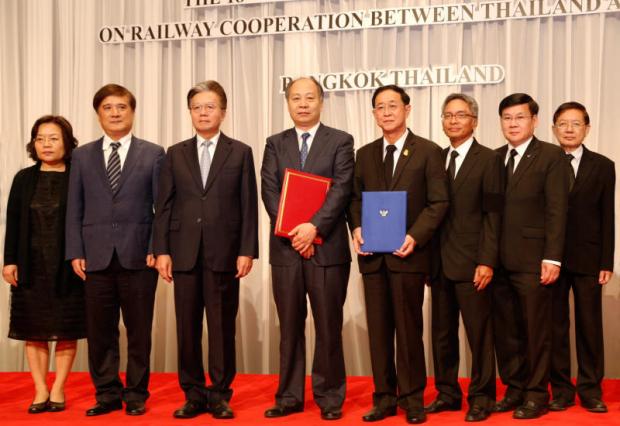 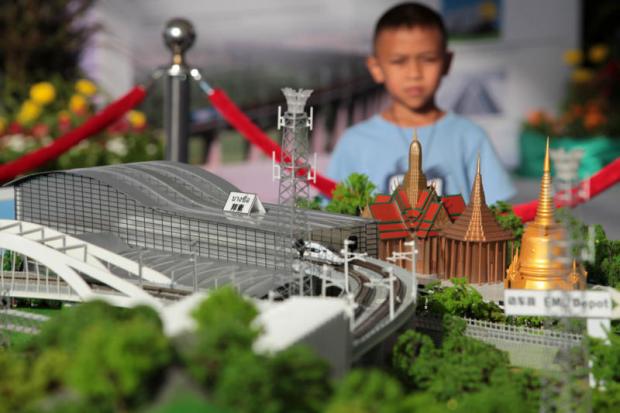 on track to the future: A boy looks at a model of the planned Thai-Chinese railway on display at Chiang Rak Noi station in Ayutthaya's Bang Pa-in district. 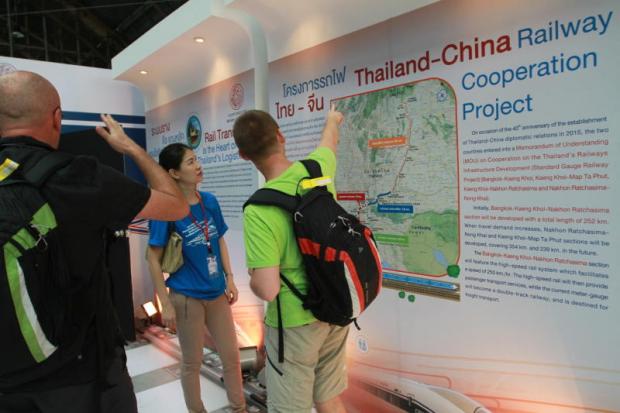