The US is in the midst of a political meltdown, unable to manage a domestic economic agenda or a coherent foreign policy. The White House is in turmoil; Congress is paralysed; and the world is looking on in astonishment and dread. If we are to survive and overcome this collapse, we must understand its sources.

There are two power centres in Washington, DC: the White House and the Capitol. Both are in disarray, but for different reasons.

The dysfunctionality of the White House is largely a matter of President Donald Trump's personality. To many experts, Mr Trump's behaviour -- grandiose self-regard, pathological lying, lack of remorse or guilt, expressive shallowness, parasitic lifestyle, impulsiveness, failure to accept responsibility for his own actions, and short-term marital relationships -- are symptoms of narcissistic personality disorder.

The consequences could be dire. Pathological narcissists have a tendency to indulge in violent conflicts and wars (think of Lyndon Johnson and Vietnam or of Andrew Jackson and the ethnic cleansing of Native Americans). At a minimum, Mr Trump lacks the psychological characteristics needed for constructive governance: honesty, dignity, competence, empathy, relevant experience, and the capacity to plan. According to some observers, Mr Trump also shows signs of diminished mental capacity.

The hope in Washington is that "adults in the room" will keep Mr Trump's dangerous tendencies in check. But the "adults" in Mr Trump's administration are increasingly military figures rather than civilians, including three generals (John Kelly, the new White House Chief of Staff, National Security Adviser H R McMaster, and Secretary of Defence James Mattis). Wise civilian leaders are the key to peace, especially given that America's vast war machine is always revving. Recall John F Kennedy's military advisers, who advocated war during the Cuban Missile Crisis, or consider Mr Mattis' anti-Iran belligerence. 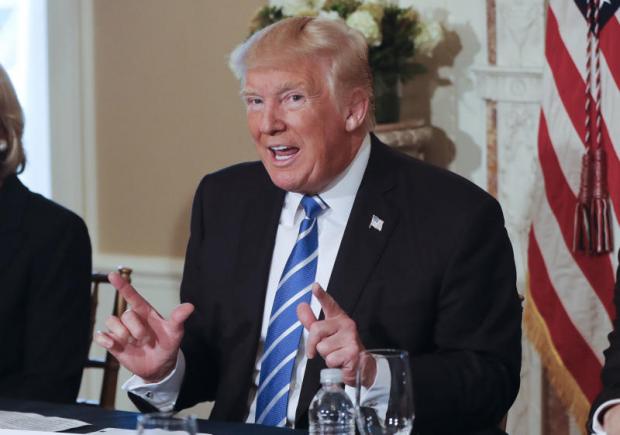 President Donald Trump gestures as he answers a question regarding the ongoing situation in North Korea in New Jersey on Friday. AP

There are two other escape valves: the 25th Amendment, which charts a course for removing a president who is unable to discharge the responsibilities of office, and impeachment for "high crimes and misdemeanors". Both measures are extreme in the US constitutional order, and both would depend on the agreement of Republican leaders. Nonetheless, one or the other may prove necessary and even urgent in the event that Mr Trump's psychological instability or political weakness leads him to launch a war.

The political meltdown in Congress is less dramatic, but serious nonetheless. There, the cause is not a personality disorder; it's money. The legislative branch has been deeply corrupted by corporate lobbying and campaign contributions. Two brothers, the industrialists David and Charles Koch, worth a combined US$100 billion, virtually own the votes, and voices, of Speaker Paul Ryan and Senate Majority Leader Mitch McConnell.

The result is politically perverse. Mr Ryan and Mr McConnell relentlessly push legislation favoured by the Koch Brothers rather than the American people. The attempted repeal of President Barack Obama's signature health-care legislation, the 2010 Affordable Care Act ("Obamacare") had nothing to do with voters' views or interests; it was simply what the Koch brothers (and other Republican mega-donors) wanted.

That's why the repeal legislation was kept secret until the last moment and was never subjected to expert testimony or analysis -- or even considered by a Congressional committee. The legislation could pass only if it was hidden from view and voted on in the middle of the night. In the end, three Republican senators jumped ship, siding with the American people rather than with the Kochs.

Between Mr Trump's narcissism and the Koch brothers' money, the US government has become a shambles. Washington is still filled with many smart and talented people of both parties, but America's political institutions and formal processes are diminished. The federal government is haemorrhaging scientific expertise, as researchers leave or are purged, and as agency budgets are targeted for deep cuts. Seasoned diplomats are flooding out of the State Department. Lobbyists, meanwhile, are installing cronies and hacks throughout the government.

Through the din, new drumbeats of war can be heard, most ominously against Iran and North Korea. Is it posturing or real? Nobody knows. Mr Trump's foreign and military policies are now announced in early-morning tweets, without the foreknowledge of the White House staff or senior officials. The situation is dangerous and deteriorating.

I suggest three immediate steps, and a fourth longer-term step.

The first step is to take Mr Trump off Twitter. The US -- and the world -- needs public policy by consultation and deliberation, not one man's worsening pathology. The American people, by a large margin, concur that Mr Trump's tweets are hurting national security and the presidency.

Second, congressional leaders should agree, on a bipartisan basis, to constrain Mr Trump's belligerent proclivities. Article I, Section 8 of the US Constitution vests the authority to declare war with Congress, and Congress needs to reassert that authority now, before it's too late.

Third, the world's major powers -- most urgently, America's NATO allies, China, and Russia -- should make clear that any unilateral US attack on Iran or North Korea would constitute a grave and illegal violation of the peace, and that matters of war and peace must be agreed within the UN Security Council. If the US had heeded the UN Security Council's collective wisdom in the recent past, it would have avoided several ongoing disasters, including the chaos in Iraq, Libya, and Syria, and saved trillions of dollars and many hundreds of thousands of lives.

Much more needs to be done to restore democratic legitimacy in the US, including introduction of stricter limits on campaign financing and lobbying. First and foremost, however, we must survive the dangerous Trump presidency by preserving the peace. - PROJECT SYNDICATE