Kra me a river
Opinion

Kra me a river

They say that in 1677 King Narai the Great came up with the idea of excavating a ditch for a canal from Songkhla to Burma. His French engineer de Lamar travelled to the South, looked around and reported back that it was impossible.

Whether this romantic tale was the actual start of the world's oldest development project is pretty debatable, but here is certain fact. During the first and only reign of the Thonburi dynasty, the young brother of King Taksin, Maha Sura Singhanat, figured (correctly) that a canal across the lower Siamese isthmus would make it exquisitely easier to protect the country's western coastline. And that was certainly the moment anyone thought of an Andaman-to-Gulf waterway. 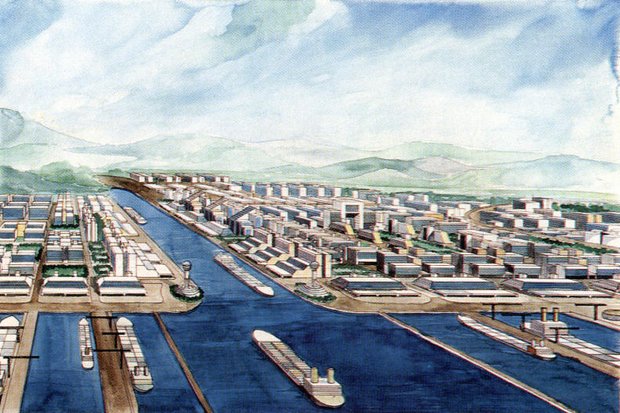 This is an artist's vision of the Kra Canal, surrounded by a thriving city and the beauty of the mountains of the South - a long, long way in the future.

That was in 1793, when the brand new United States of America had just signed a constitution and loosely organised 13 states into a federal republic. So it's correct to say the Kra Canal has been in theoretical development for 224 years, although King Taksin's court and every regime since has seen the canal idea untracked.

As recently as 1897, the British managed to squeeze an agreement from King Prajadhipok (Rama VII) not to dig a cross-Siam canal. The Brits wanted to ensure Singapore dominated the region. And here's a funny coincidence. It's the same today, except it's the Singaporeans themselves who are at least a bit frightened of a potential Kra Canal.

Of course that hasn't actually deterred planners. The oldest known construction dream of the country has been studied countless times. A recent Harvard study concluded that nine Kanchanaburi forest reserves have been cut down an average of 23.7 times each to supply the paper for formal studies.

Engineers in the days of Kings Narai the Great and Taksin figured excavation in terms of handfuls and baskets of dirt, passed from hand to hand along long lines of slaves. Now it's Caterpillar buckets of dirt dumped in long lines of lorries.

For a while, coincidentally when war was a positive event, engineers dreamt of the Kra Canal by seeing huge explosions sending tonnes of dirt sky-high at a time -- then to be swept by backhoes, somewhere.

Without a shred of doubt, the "best" plan for the undiggable isthmus was by the interesting US general Ed Black, where by "interesting" we always mean vastly and creepily eccentric.

A Vietnam battlefield commander and later the commander of all US troops in Thailand, Gen Black retired after "his" war ended in 1973 with the Paris Peace Accord, and he became a Bangkok-based entrepreneur. Kind of like Jim Thompson only more, well, explosive. There are at least six serious proposals for siting the theoretical Kra Canal should be placed, of which this is one, and fairly close to what Kings Taksin and Narai the Great had in mind.

TAMS Engineering was the brains of that day. It came up with six possible canal sites, from as far north as Chumphon, all the way down to Songkhla. Gen Black's plan to "dig" any of them was pretty simple. Just put some nuclear bombs under the ground and a few mushroom clouds later, there's your canal.

For some reason, this plan failed to win loud and enthusiastic support.

In recent months, China has revived the Kra Canal development plan. A small and discreet group backed by even more discreet backers high in the Beijing hierarchy have revitalised the call for a man-made, cross-Thailand river. That doesn't mean it's going to happen -- the cream of the Chinese autocracy is also demanding a Malaysia-to-Nong Khai railway that's still very iffy, to put the railway plans in the most optimistic way.

The arguments haven't changed. Compared with the Suez and Panama canals, a Thai canal would be modest. A credible study in 2011 by the UN's Environment Programme Global Marine Oil Pollution Information Gateway showed that if every oil tanker from the Middle East to East Asia were diverted into the Thai canal, companies and governments would save less than $500 million a year. You don't sneeze at that, but it's nothing like the savings of the two big canals.

Singapore Prime Minister Lee Hsien Loong says of the Kra Canal (and this is his actual quote in a Radio Singapore interview): "Ha ha, efficiency will keep us in the lead." English translation: Mess with Singapore's port business and see what we can do to you.

To this moment, at least, the main barrier to scooping out the first shovelful of Songkhla (or Surat Thani or Chumphon or...) dirt is simple. The military regime, like every other government back to the court of Narai the Great, won't back the project. It's impossible to cut the country in two without such backing.

Rich and once influential Thais have visions of oil dollars flooding their accounts from canal passage fees. Truth is that the shift to US carbon fuel sources, not to mention a worldwide tectonic shift away from carbon fuels at all, mean that the chances of a successful Kra Canal are arguably less today than at any time in the past 340 years.