The 184-year-old paradox of elephant-eagle relations

The US Embassy encouraged this painting by young Thai graffiti artists on the wall of its Wireless Road consulate. (File photo)

The elephant and eagle as symbols of Thailand and the United States were not the creation of today's news spin-meisters. In 1833, US president Andrew Jackson gave a gift to King Rama III that symbolised one of the most important relations the US had with the outside world -- its first foreign mission in Asia. Jackson gave the king a sword with an eagle representing America and an elephant representing Siam carved into the handle.

The relations between the elephant and the eagle are hard to fathom in the present-day context as it is no longer decided by presidents and kings. In those days, despite the distance and lack of connectivity, countries were more sensitive and had a better understanding of one another, even though they did not have social media platforms such as Twitter as a diplomatic tool.

One of the most famous messages that King Mongkut (Rama IV) sent to President James Buchanan in February 1860 was the most telling. After learning that there were no elephants in the US, the Thai King proposed to dispatch some as a gift. When the royal letter arrived, president Abraham Lincoln had been elected to succeed Buchanan as president in November of that year. Due to domestic turmoil and the US civil war, which broke out the following April, Lincoln did not pursue the king's offer. This very letter will be on public display in March next year at the Chitralada Palace, along with other royal gifts with the permission of Smithsonian Institute.

Fast forward to Washington this week: another historic Thai-US event is taking place, not about one or two pairs of animals this time but rather about American jobs, the trade surplus and what Thailand can do for and give to Donald Trump's America -- something that would empower his presidency and supporters.

The key message that Prime Minister Prayut Chan-o-cha carried to the US president is quite simple -- Thailand's investment in the US has reached US$6 billion (200 billion baht) and has created 70,000 jobs. Furthermore, the prime minister has a long shopping list, which has been on hold for quite some time, due to restrictions imposed by the US government. The list includes advanced weapons systems and commercial aircraft. Thailand also wants broader access to defence equipment, especially second-hand jet fighters, as a major non-Nato ally. Previously, Washington has not been forthcoming.

The three memoranda of understanding that will be signed with three giant corporations (Boeing, Chevron and General Electric) during this week's visit are about Thailand's genuine effort to reduce the trade surplus with the US. Plans for a huge procurement of aircraft -- both civilian and military -- in years to come would certainly reduce the trade deficit of $18.9 billion, which is the 11th largest on the list cited by Mr Trump last year as unfair trade against his country. Further investment by these US corporations in the newly promoted Eastern Economic Corridor would further strengthen trade and investment.

Since Prayut is visiting the US at Mr Trump's invitation, the White House is in control. The US State Department's role has been focused on substance, making sure that the visit falls short of giving recognition to a non-elected government. Due to the stigma of dealing with a government that came to power through military coup, State Department bureaucrats who oversee Thai-US relations are still not in "reset" mode -- a far cry from the Defence Department and US Trade Representative Office, which have gone far ahead with plans for security and strategic cooperation as well as to expand trade and investment. Thailand is waiting for a new East-Asian team to take over at Foggy Bottom.

Indeed, under the Trump administration, Thai-US defence ties have been quickly revitalised. The current US defence leaders, in particular Gen James Mattis and National Security Adviser HR McMaster consider Thailand a top strategic asset. In the next round of the Thai-US strategic dialogue, scheduled in October, more substantive security cooperation involving the increased utilisation of U-Tapao airbase as a hub for humanitarian assistance and disaster relief as well as special operations. 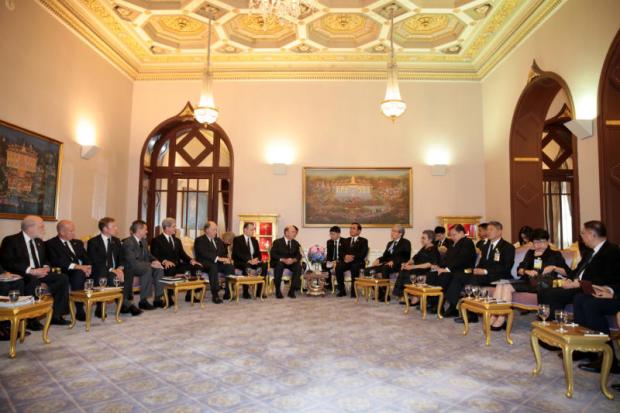 US Secretary of Commerce Wilbur Louis Ross Jr last week held talks with Prime Minister Prayut Chan-o-cha at Government House ahead of the Thai leader's visit to the US. (Photo by Chanat Katanyu)

At the recent meeting between Prayut and Chinese President Xi Jingpeng in Xiamen during the BRICS summit, both sides agreed to have their deputy prime ministers hold a strategic dialogue annually. This is a new move for the two countries. For the time being, the Thai-US strategic dialogue is held at the permanent-secretary level. Past efforts to upgrade it to the ministerial level involving both defence and foreign affairs officials have been turned down, citing mutual unpreparedness.

As for Thai-US economic ties, the two countries plan to set up a special committee to focus on their special relationship. Last week's highly successful visit of US Secretary of Commerce Wilbur Ross here confirmed more vigorous trade ties with Thailand in the future.

Since he became president in January, Mr Trump has welcomed three Asean leaders to the White House, from Vietnam, Malaysia and Thailand, and a fourth, Singapore Prime Minister Lee Hsien Loong, is scheduled to visit Washington next month. The Philippines has not yet responded to Mr Trump's personal invitation. However, Mr Trump has said he will attend the Asia Pacific economic leaders meeting in Danang, Vietnam, and the Asean-US Summit and East Asia Summit at Clark Airbase in the Philippines in early November.

Despite the unique Thai-US relationship, all visiting Asean leaders share similar concerns about Mr Trump on transnational issues affecting peace and stability in Southeast Asia. Therefore, the issues topping the agenda of the meeting between Gen Prayut and Mr Trump are familiar ones -- North Korea's nuclear threats, maritime security, the South China Sea, human trafficking, fighting the Islamic State, and intelligence sharing. Finally the conflict in Rakhine State might come up because Thailand is a close neighbour of Myanmar and is affected by the refugee crisis there. Thailand has already pledged $300,000 to help with the refugees in Myanmar and Bangladesh.

Also, akin to the Asean leaders before Prayut's visit to the White House, Thailand and the US will adhere to the spirit of the Sunnylands Declaration, which was agreed on in February 2016. Although Mr Trump wants to upend his predecessor's major legacy, the Asean-US achievement would be hard to dismantle.

As a founding member of Asean, Thailand has supported the group without fail. Doubtless, the two leaders will reaffirm their commitment to the strategic partnership with the US, as well as common efforts to develop a rules-based Asean Community and maintain Asean centrality in the evolving regional architecture.