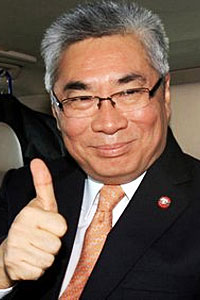 When he spoke to the UN General Assembly last year, the prime minister dwelt at length on the Sustainable Development Goals (SDGs) and how to implement them. (File photo)

The report was discussed last week at the UN headquarters in New York during a meeting titled "Achieving the Sustainable Development Goals for Children: Collective Actions and Innovative Solutions".

The Sustainable Development Goals (SDGs) are a universal call to action to end poverty, protect the planet and ensure that all people enjoy peace and prosperity. The unanimous adoption of the SDGs by the UN General Assembly in September 2015 shows the need for a global solution to end violence, hunger, poverty, gender inequality and conflict, and to move forward with a sustainable agenda for the future.

In respect of children, the SDGs provide a comprehensive framework for us to tackle violence in childhood in an integrated way, with separate goals setting out what should be done in respect of good health and well-being, quality education, the elimination of poverty, the achievement of gender equality and the reduction of other inequalities, the securing of decent work and economic growth, and the achievement of peace, justice and the rule of law.

All of these are doubtless ambitious goals, but they needed to be established.

The UN General Assembly recognised that all of these goals are connected and mutually reinforcing. For example, when we address violence against children, it is not enough to identify and bring to justice the offenders who commit crimes against our children. We also need to effectively address the root causes of such violence. The best way to prevent violence against children is to ensure human development and to create a culture of lawfulness and awareness in society.

Social inequality, poverty, and the lack of access to education and economic opportunities remain the driving forces which push individuals to break the law and, at the same time, make certain members of society, particularly women and children, more vulnerable to victimisation.

In a report produced jointly by the Thailand Institute of Justice and the United Nations Office on Drugs and Crime, we looked at trafficking of people in Southeast Asia within the broad context of migration. We found that many child victims of sexual abuse and labour exploitation come from poor rural areas, where their families do not own land or have suffered from poor harvests or crop losses.

We can see that at the root of the problem lies a complex mix of push factors and vulnerabilities which make children prone to abuse and exploitation. When seen in the light of this reality, the importance of achieving the SDGs for children becomes all the more apparent. Through "development-led" approaches, we can focus on addressing the underlying difficulties and vulnerabilities and, at the same time, on empowering children and their families to be part of the prevention of and solution to violence, not part of the problem.

Although this development-led prevention may be relatively new as a concept, the practices themselves are not. We can find many inspiring examples also in Thailand where we have succeeded in curbing the illicit cultivation of drugs in remote areas in the North, not solely through strict control and enforcement measures, but primarily through what has become known as the alternative development approach pioneered by His Majesty the late King Bhumibol Adulyadej more than four decades ago.

Local villagers in the North were mostly ethnic minorities without a proper legal identity. Many lacked even the basic necessities in their lives. In order to address these fundamental needs, through health, education and other basic support, the late King Bhumibol took the time to consult with members of the local communities on the possibility of replacing illegal crops with other economically viable crops such as coffee. Once the agreement of the local population was secured, technical support followed, from the selection of the crops, to soil and water management, all the way to market access and marketing.

Another crucial element in achieving the goal of zero violence against children is culture, particularly the culture of prevention. To achieve this, we need to build a momentum of awareness-raising activities targeted at a broad spectrum of violence within our society. We know from research that on many occasions, children are not aware that they have been the victims of violence, that someone has committed a crime against them. Awareness-raising and changing the mindset of people requires the input of all stakeholders, including the media -- and the input of the children themselves.

Awareness-raising is important, but we should not overlook the important role of the law and of the institutions of justice in addressing violence against children. The law and its implementation needs to be robust enough to prevent and respond to violence perpetrated against children.

We in Thailand, and undoubtedly stakeholders in the other Asean members as well, need to work harder to ensure that our criminal justice system is more victim-oriented. We need to provide adequate protection for child victims of violence, including child-friendly criminal justice proceedings and other support for child victims during the investigation process. In this respect, there are a number of good practices that I have observed. The establishment of Child Advocacy Centres in Thailand is one example.

The SDGs and the development-led approach call for a comprehensive framework to address the problem at its roots. In the same spirit, the United Nations Model Strategies and Practical Measures on the Elimination of Violence against Children in the Field of Crime Prevention and Criminal Justice (the "UN Model Strategies" in short) represent another important tool to address violence against children.

This set of standards and norms in crime prevention and criminal justice was developed with strong Thai leadership, and was endorsed by the UN General Assembly in December 2014. It has provided a useful framework for criminal justice systems around the world in establishing a rights-based approach in protecting children from violence, through comprehensive prevention, a proper focus on the needs of child victims and witnesses of violence, and proper safeguards for children in contact with the justice system, since even here they may face potential violence, including violence in institutional settings.

The UN Model Strategies also call for a multi-disciplinary approach as well as close coordination among all stakeholders concerned with the well-being of children.

Given that three out of four children have experienced violence during the past year alone, it may seem that the problem continues to outpace our best efforts. But this is a fight that we must continue, and the Sustainable Development Goals provides a framework for doing so.

I believe that these, combined with effective, fair and humane criminal justice institutions and a legal framework that is founded on the rule of law, are what we need in our fight against violence against children.

Kittipong Kittayarak, PhD, is executive director of the Thailand Institute of Justice (TIJ) and a former permanent secretary of the Ministry of Justice. The article is an adaptation of his presentation at a high-level meeting on achieving the Sustainable Development Goals for children at the United Nations Headquarters in New York on Oct 2.

Kittipong Kittayarak, PhD, is the Executive Director of the Thailand Institute of Justice (TIJ). He was formerly the Permanent Secretary of the Ministry of Justice of Thailand. This article is an adaptation of his address at the Regional Conference on Enhancing Cooperation on Border Management in Asean, organised by the United Nations Office on Drug and Crime (UNODC) and the Department of Asean Affairs, the Ministry of Foreign Affairs, in Bangkok during 25-26 April 2016.

It's time for compromise

Economy, not rallies, should worry govt