More than 4 billion baht worth of heavy armour was lined up at Sattahip, awaiting transport to the Northeast. (Post Today photo)

Even though the first batch of 28 VT-4 Chinese tanks, which arrived this month, are being hailed as the Thai army's most modern model, their durability and maintenance costs are still being questioned.

The latest acquisition of the tanks opens old wounds among many Thais who still vividly remember the army's premature decommissioning of its 25 T69-2 Chinese-made tanks in 2010.

Commissioned in 1987, the tanks ended up being dumped in the Gulf of Thailand to serve as artificial reefs. A lack of spare parts forced the army to dump them.

The fate of those tanks stands as a reminder of the military's failure in military hardware procurement.

But the army said it will be different this time. In addition to their high quality and good prices, the tanks will be supported by the ready availability of spare parts and maintenance services, the army said.

The VT-4 tank weighs 52 tonnes, using a turbocharged 1,200 horsepower diesel engine. It uses technology from Germany's MTU engine, communication systems from Israel and digital control systems. Its maximum speed is 70kph on the road and 35-40kph in off-road areas.

Its other features include a smoothbore cannon capable of firing guided missiles within a 4.5km range and secondary armaments such as a 7.62mm coaxial machine gun, a 12.7mm anti-aircraft machine gun, eight 7mm smoke grenade dischargers and four defensive grenade launchers.

More interestingly, the VT-4 tank can operate under water at a depth of 1.8 metres.

But army chief Chalermchai Sittisad, who chaired a committee in charge of procuring the tanks when he was an assistant army chief last year, insisted this feature is not the key reason the army picked this model.

"The diving capability of the tanks is not a prime necessity because their actual combat is on land," said Gen Chalermchai. 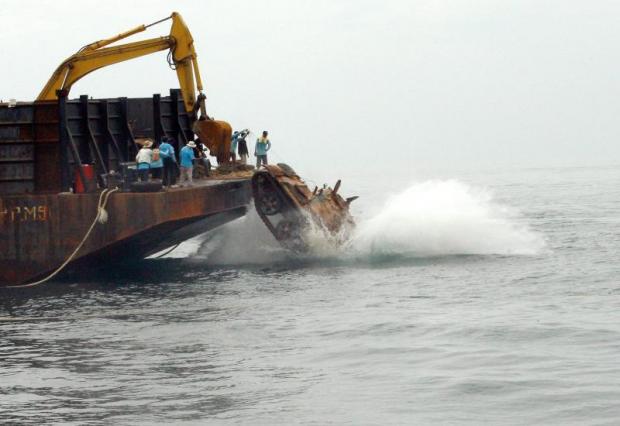 Conservationists push a T69-2 Chinese-made tank into the sea off Narathiwat province in April, 2010, to serve as an artificial reef. (EPA photo)

The army chief praised its overall quality, saying he visited China to inspect the production of the tanks last year and saw for himself they were highly efficient.

He also brushed off criticism the tanks could be old models and past their sell-by date. Such criticisms stem from the fact the delivery was made three months ahead of schedule.

An army source said the VT-4's lower price is the key reason for the army's decision in its favour. Additionally, its quality is of an acceptable standard.

As with other Chinese products, the durability, after-sale services and maintenance cost of the tanks have been questioned. The average life span of the army's tanks is over 25 years.

The source admitted the army acknowledged these concerns during the procurement of the VT-4 tanks. Defence Minister Prawit Wongsuwon has made a deal with the Chinese Defence Ministry to allow China to set up military hardware repair facilities in Thailand at a navy base in Sattahip, Chon Buri, an army base in Nakhon Ratchasima and an air force base in Takhli, Nakhon Sawan. The facilities will ensure the army can order and get spare parts whenever it needs them.

The new tanks will replace the ageing M41 tanks purchased from the US over 40 years.

The army has ordered 10 more of the VT4s this year and will order another 10 next year. Each batch is worth 2 billion baht.

In addition to price and quality, the army also based its VT-4 tank procurement decision on bilateral relations.

The military government has boosted ties with China to balance the US's geopolitical influence. This is evident in its deals with China for the procurement of the VT-4 tanks, VN-1 armoured personnel carriers and three submarines.

"Bilateral relations are a key factor that prompted the US, which once strongly opposed the coup, to pay more attention to its relations with Thailand under this military government," said the source.

The Chinese tanks marks the start of a new era in which the army's defence capability will no longer be dominated by the use of armaments and military hardware made in and ordered from the West.

But it will take some time for made-in-China armaments and military hardware to prove themselves in terms of whether their durability and efficiency can match those of the West.

Sympathy, but little support for protest

How the United States can avoid war with China