The military government has a propaganda unit. People know this, including reporter-people, which includes us, and editor-people. But they still call the chief manipulator of regime propaganda a "government spokesman". A two-star general whose sole task is to justify military actions without ever admitting an error was possible is also, on all front pages and news broadcasts, a military "spokesman".

They are not. A spokesman is a go-between when a phuyai hasn't the time or gumption (or wit) to speak directly to the nation. 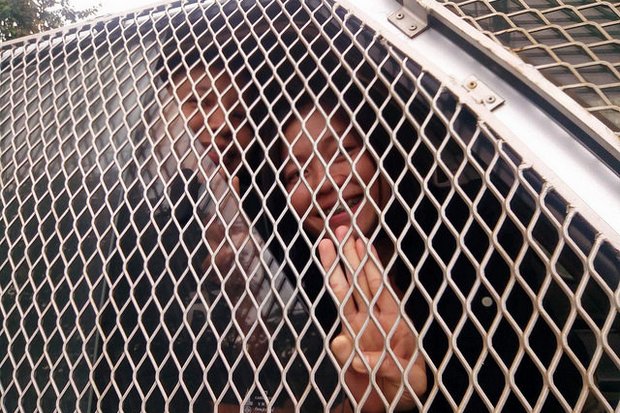 Members of the Khon Kaen 7 continue to demonstrate defiance with the three-finger 'Hunger Games' salute even inside the military's Black Maria. (Photo courtesy Prachatai.com)

There's quite a difference between a professional and informative spokesperson and a hard-charging chief of military propaganda. Example: The competent Busadee Santipitaks of the Ministry of Foreign Affairs. She doesn't sell snake oil; she tells the public, through the media, what her minister, Don Pramudwinai, is saying and doing. The general in charge of propaganda, however, does more spinning than a home-based Thai silk maker.

Similarly, justice. The military has its own justice system, because it must. Men and women of the armed forces during but also out of battle cannot have the same rights and freedoms as the citizens they serve.

Thailand the country, however, doesn't need military justice. The extensive justice system serves the 67 million Thais who are not in military uniform. For one thing, the Courts of Justice and their brother courts are unafraid to admit error. They invite everyone involved to prove they do make mistakes, thus the Appeal Court, the Supreme Court, the Administrative Court and others.

Military courts never make an error. Ever. They need no appeal system. Their prosecutors and appointed defenders and judges never err.

The toughest job that a three-star green-shirt propagandist has is trying to explain that military courts mean justice. It's a trial (no pun intended there) when everyone already knows that Clemenceau was correct that "Military justice is to justice as military music is to music". 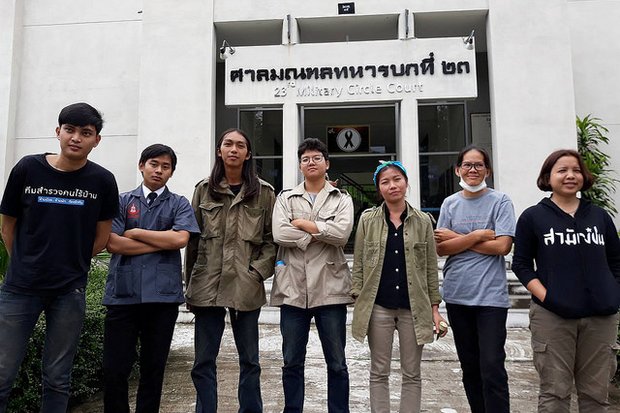 The "Khon Kaen 7" posed for a photographer before their appearance at a military courtroom in the building to their rear. (Photo courtesy Prachatai.com)

Last week in a room of the typically spick-and-span military court in Khon Kaen, seven young people faced charges that could put them away for years. If there still are people so innocent as to think only the worst of the worst civilians are sent to hear martial music, here (again) was confirmation that is rubbish.

The youths facing the military judge and the military prosecutor behind doors secured by black and red helmeted military police were charged with holding a meeting on July 31 last year. Before the meeting, during the meeting and -- most importantly for this case -- after the meeting, nothing happened. It had absolutely no effect on anyone or anything, anywhere in the country.

However, they violated a military-issued regulation, the Public Referendum Act, which bans meetings. Their clearly illegal, socially sterile meeting had a name: "A Talk for Freedom: The charter and Isan people". At the meeting, they earnestly discussed, as young people do, the military-written, regime-approved constitution which was unsurprisingly approved by a military-run referendum eight days after the meeting.

There were supposed to be eight people facing the judge last week, but one of them couldn't make it. Jatupat Boonpattararaksa, or Pai Dao Din, now a familiar figure throughout the country, was avoidably detained in a cell close to the military court.

Pai has been locked up since early this year to keep him away from computer mouses and smartphone buttons. He has violated at least three laws including Section 112 on lese majeste … well, allegedly violated them.

He was the lucky winner, picked from a crowd of 3,000 people to serve as the sacrificial example of what happens when you click "like" on an internet story that the Minister of Truth has declared to be badthink.

So with society protected from the computer mouse-clicking Pai, back to the courtroom.

The military prosecutors don't allow lawyers in their courts but agreed to let two people from iLaw attend. They did not actually shackle them and use duct tape to ensure their silence. The iLaw representatives, however, had to wear special badges at all times, like yellow stars. This was not because they are Jews but because they are worse -- members of a human rights group.

Jatupat "Pai Dao Din" Boonpattararaksa is the eighth defendant in the Khon Kaen meeting case, but he could no attend the military court hearing because he was tied up in a nearby facility. (File photo)

The charge against the young people is that they violated this post-coup Public Referendum Act. The act makes it illegal to be against the now-approved charter, written by a committee headed by Meechai Ruchupan, who has written more failed national constitutions than any living person.

Their actual trial will begin on Dec 21. Probably, considering the precision closely identified with military courts, it will end four days before Christmas.

For people who don't like this, members of the military propaganda team can explain patiently that lawbreakers must be punished. Where by "patiently" we mean "once". Because people who insist on criticising military courts and sentences twice are obviously troublemakers, like Pai and the Khon Kaen 7.