The Tanyakan family who lost their young son under mysterious circumstances in October while he was studying at the Armed Forces Academies Preparatory School is taking the armed forces to task for an investigation into the case they described as "a disappointment". They have every right to do so.

Mrs Sukanya, the bereaved mother of 18-year-old cadet Pakapong, lashed out at the the military panel which released its investigation results last week. It concluded her son's death on Oct 17 was caused by cardiac arrest. She posted her remarks on Facebook.

The panel seemed to expect the family's disappointment as it decided not to invite the parents or next-of-kin to the press conference, for fear of a confrontation. Lt Gen Natathapol Boonngam, chief of the RTAF's Directorate of Joint Intelligence, said the RTAF invited the parents to discuss the panel's findings on Monday.

The panel, chaired by ACM Chawarat Marungruang, concluded the young man's death at the Armed Forces Academies Preparatory School was caused by sudden cardiac arrest, probably resulting from hyperventilation. While admitting Pakapong had been twice punished one day before his death, the panel ruled out any foul play, insisting the student was not physically assaulted as is widely believed.

Prior to the investigation, the chairman of the probe said his panel was to chronicle what had happened before Pakapong's death, and it would not try to conclude what was the cause of his death.

The panel conceded the cadet was punished twice on Oct 16. The first punishment was ordered when Pakapong was too slow during a run.

As he failed to say the traditional "thank you" after the punishment, the cadet was punished again and this time he collapsed, suffering from an attack of hyperventilation, and was sent for medical treatment.

The panel asserted that it is "not uncommon for punishments to be severe enough to cause cadets to hyperventilate."

The panel also ruled out any assaults as the cause of bruises found on Pakapong's body. Instead, it said the student must have obtained those bruises when he fell down some stairs on Oct 10.

It said because the student was not punished on the day he died, nor had there been any order for an extreme punishment for him that day, that no one should be held to account for Pakapong's premature death.

Pakapong, the panel said, "was at the school's medical unit for treatment on Oct 17, the day he died, and nobody disciplined or assaulted him that day." 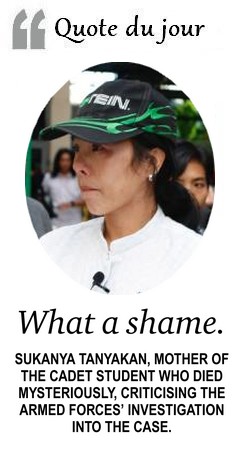 In addition, ACM Chawarat, while maintaining the school has improved disciplinary measures to ensure punishments are not harmful to trainees, admitted some senior students have breached the regulations, and still resort to life-threatening measures.

The school did not sit idle, he said, but took the issue seriously, slapping the violators with heavy punishments when they occurred.

Media reports said in the case of Pakapong, some senior students involved in his disciplining were punished for what appeared to be a breach in regulations governing disciplinary action.

Not linking Pakapong's death with the previous punishments makes the military's findings look unconvincing and too convenient. Such a shoddy conclusion gives the impression there was a cover-up in the case.

This is only enhanced by the fact that the military failed to include third party elements in the panel who could have ensured the objectivity of the probe.

There were 147 new Covid-19 fatalities and 18,901 new cases over the past 24 hours, the Public Health Ministry reported on Tuesday morning.

US urges Asean to stand up to China