Regime must clear air on its political hopes
Opinion

Regime must clear air on its political hopes

At this time of the year, the Prayut Chan-o-cha administration introduces giveaway packages, branded as New Year "gifts" for Thais, probably in an effort to maintain its "return happiness to the people" promise.

A wide range of gifts have been introduced, from a 5% income tax cut for small- and medium-sized enterprises and handouts to 850,000 rubber farmers of 1,000 baht per rai in 2014, to freezing the cooking gas price, cutting rental fees for farmers who lease state land, and providing tax breaks for shoppers and holiday makers in 2015, and the reemergence of the tax deduction scheme and one-time cash handouts worth 12.8 billion baht to low-income people in 2016.

This year, several more packages have emerged. Besides welfare cards for the poor which cost at least 40 billion baht a year, the government has introduced tax deductions on expenditure for local tourism in second-tier tourist destination provinces, expanded the Pracharath broadband internet network to cover 24,700 villages nationwide, and launched multi-billion-baht development projects.

What's different from past years is Gen Prayut, who has now gained the moniker "Santa Tu"for his seasonal generosity, this year led his cabinet members to deliver his New Year gifts to people in their homes during his mobile cabinet meetings in every region, from the South to the Northeast to the North. Each meeting would be wrapped up with the approval of hundreds of billion of baht for various projects proposed by respective local administrations.

If the regime had not repeated its promise to stick to the political roadmap, with an election taking place next year, I might have thought Gen Prayut was on the campaign trail.

Thai people could be happy and love the Prayut regime or its New Year giveaways -- something they cannot get from elected governments which are obliged to report their spending to parliament or face censure debates for contentious policies resulting in irregularities.

But this time it's different. The Prayut administration is powerful enough to introduce any policy it likes without worrying about parliamentary scrutiny, or public criticism.

A pro-democracy group last week called to no avail on the National Legislative Assembly (NLA) to launch a no-confidence debate against the Prayut administration for what it said was the government's failure to solve economic problems and the abuse of civil rights.

I have no problem with government giveaways, especially if the packages are based on the actual needs of the people. At least they are better than corruption.

Two opinion surveys by Nida Poll and Super Poll said what people mostly want as 2018 New Year gifts from the government are measures to tackle the cost of living and plunging farm product prices. They also want the government to wipe out corruption as well as crime and illicit drugs. Lifting the political ban is on the wish list too.

For myself, what I want for New Year is clarity from the National Council for Peace and Order (NCPO) over whether it will plans to its own political party or a proxy party back Gen Prayut to stay in power. Numerous observers have questioned the NCPO's neutrality in the next election. While Gen Prayut has constantly said he has no intention of maintaining his grip on power, he has never entirely ruled out the possibility of him becoming an outside prime minister.

While the NCPO has repeatedly denied speculation about a military-backed political party, the invocation of Section 44 order has made the public think otherwise. Thanks to the order, new political parties are allowed to start their registration process a month earlier than existing parties.

Existing parties also wonder whether the requirement for all party members to re-register amounts to a "reset" that would open the door for some members to abandon them for new parties. Such doubts regard speculation about the establishment of a military-backed political party that would back Gen Prayut and the regime to stay in charge after the next election. Worse still, the Section 44 order seems to make the prospects for a November 2018 election uncertain.

That may be only speculation with no grounds. But Gen Prayut and the NCPO should clear the air. 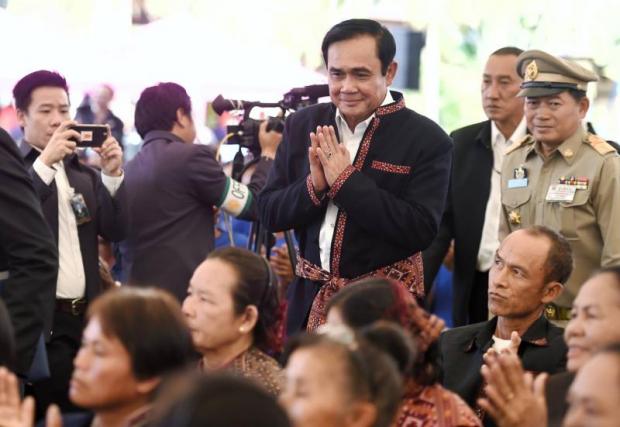 Prime Minister Prayut Chan-o-cha greets local people like a politician  in Kalasin during a field trip earlier this month. (Photo by Pattanapong Hirunard)

I would personally welcome any military-supported political party. An openly military party, as a political actor, would be much better than dictators who rob us of freedom and democracy in my view. I think it would be healthier for our political system.

I have heard that a military intelligence unit has conducted a survey about the popularity of the NCPO and Gen Prayut, with favourable results for the regime, and an 80% satisfactory rating for the PM. More importantly, the respondents said they would still trust him to be the next prime minister.

The respondents said they were mostly satisfied with the NCPO and the government's efforts to maintain peace and order. But what they mostly want the government to solve is economic hardship, particularly bread-and-butter problems. More importantly, the survey suggested that people who used to support the Pheu Thai Party have become "undecided".

Based on such favourable survey results, the NCPO and Gen Prayut should make their stance clear on their political future, so people know what options they will have.

Ambiguity will only erode the confidence of the people and investors.