Was Deputy Prime Minister Prawit Wongsuwon really serious when he issued a stern warning to officials of the Foreign Ministry, the Office of the Attorney-General and police that they could face malfeasance in office charges under the Criminal Code if they do not try hard enough to have fugitive former prime minister Yingluck Shinawatra sent back home to face the music?

I would prefer to hear the deputy PM using the same tone with the National Anti-Corruption Commission (NACC) when instructing them to handle the probe into the "borrowed" pricey watches seen on his the wrist in a straightforward manner. But that would be just wishful thinking.

Yingluck slipped out of the country through the porous border with Cambodia in Prachin Buri province with the help of three police (as far as we know) a few days before the Supreme Court's Criminal Division for Holders of Political Positions was due to deliver its verdict on her for dereliction of duty in curbing corruption in connection with the rice pledging scheme, which caused massive financial damage to the country. And from Cambodia, she flew on to Dubai in the private jet of her elder brother, the fugitive former prime minister Thaksin.

How come her escape was possible without any of the security agencies knowing about it or making an attempt to thwart it? After all, who is responsible for the country' security affairs and who should be held accountable for this gross security lapse?

Gen Prawit, who is also defence minister, should know better than the foreign affairs officials, public prosecutors and the police that getting Yingluck extradited back to Thailand to serve the five-year jail term handed down by the Supreme Court is wishful thinking. Even Prime Minister Prayut Chan-o-cha admitted the other day he didn't expect to see her back.

Just take a look at Thaksin, who has been living in exile overseas almost 10 years now, and, still has not been extradited to serve his two-year sentence imposed by the same court over the Ratchadaphisek land deal.

If Thaksin is capable of eluding extradition for such a length of time, so is Yingluck. The former prime minister will use all his influence, connections, money and nous to protect his younger sister who is reported to have applied for asylum in England. And forget about the extradition trial. Quite a few runaway politicians, including Vatana Asavahame and others implicated in high-profile crimes, are still at large. The extradition of Rakesh Saxena who, together with the late Krirk-kiat Jalichandra, plundered the now defunct Bangkok Bank of Commerce to its bankruptcy in the 1990s, took 13 years. It is seen as an extremely rare case. 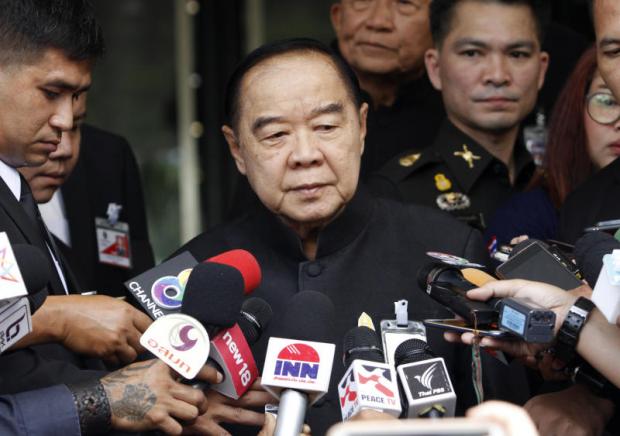 Tough talking aside, the wristwatch controversy may not fade away any time soon with CSI-LA, a pro-Thaksin media outfit based in Los Angeles, still busy digging up more dirt.

One more dimension concerning the NACC which will have a direct impact on the wristwatch affair is likely to be played out in the Constitutional Court.

Lately, Constitution Drafting Committee chairman Meechai Ruchupan suggested the National Legislative Assembly should ask the Constitutional Court to rule on an amendment to the NACC bill which will spare incumbent anti-graft commissioners from being "set to zero", like the other charter-mandated independent organisations such as the Election Commission and National Human Rights Commission, to enable them to fulfil their nine-year terms in office.

The amendment was tabled on the initiative of the NLA's scrutiny committee headed by Pol Gen Patcharawat Wongsuwon, younger brother of Gen Prawit. It sailed through the NLA reportedly on the strength of an instruction from Big Brother.

Why do the incumbent NACC members need to be kept in office for up to nine years? Is it just a coincidence that this coincides with the desire of the junta to stay on for, at least, four more years in government?

Look at the name of the NACC chairman and his connection with a junta member, and you will see a strategy of military-precision to prop up the regime.

But no matter how meticulously the strategy was plotted, there will always be a loophole -- if not in the strategy itself, then in the capability of humans to err.

Just look at Gen Prawit's well-kept secret of his collection of pricey wristwatches.

If he had not raised his hand to shield his eyes from the piercing sunlight while waiting for a group photo session with the new cabinet line-up early last month, who would have ever noticed his flashy diamond ring and Richard Mille?

Finance Ministry may extend deadline for personal income tax filing by 3 months to June to give taxpayers more time to comply.

Second-home buyers will find it easier to borrow, SMEs will get tax refunds sooner and foreign reserves will be prudently invested overseas.