Judging from the well-crafted statement on the Asean foreign ministers' retreat in the Lion City last week, Singapore as the current chair of the regional grouping has its work cut out for it.

The chair's theme of "resilience and Innovation" could easily be met. However, granted today's fluid regional and international strategic landscape, familiar challenges facing the region may rear their ugly heads at any time, testing the chair's leadership and wisdom, not to mention other Asean members' responses and the group's solidarity.

The Rohingya humanitarian debacle, the South China Sea conflicts and the North Korean nuclear crisis remain three outstanding issues on the Asean agenda. By sheer coincidence, the Asean chair has to cope once again with the crisis in Myanmar. In 2007-2008, during Singapore's previous time at the helm of Asean, two unpredictable developments -- the Saffron Revolution and Cyclone Nargis -- put the Lion City in the global limelight.

At the time, the chair faced a dilemma, engaging isolated Myanmar as a member of Asean and presenting a united front of the grouping to the world. In the end, Asean maintained firm positions and responses to outside pressure, making sure it remained intact and central to regional schemes of things.

Singapore learned valuable lessons from its previous stint as Asean chair in persuading other member countries to work together on sensitive issues, particularly those related to Myanmar's domestic developments and decision-making process.

This time around, the Rohingya crisis in Rakhine State will again test the chair's diplomatic prowess. In addition, Singapore's stake in Myanmar's peace and stability is extremely high as its investment surpassed China last year as No.1 with US$4.3 billion.

Besides showing Asean's full support for Myanmar's plans and actions, the group also stands ready to help this member country. Therefore, Nay Pyi Taw's willingness to cooperate with the group is pivotal as it is the key to finding a long-lasting solution to the humanitarian crisis and tackling the root-cause. It was a good start, as Myanmar briefed its fellow members on the details of the conflict and humanitarian needs, continuing the pledge made by State Counsellor Aung San Suu Kyi in December 2016.

For the time being, besides accepting humanitarian aid from Indonesia, the Philippines, Singapore, Thailand and Malaysia under bilateral arrangements, Myanmar is working closely with the Asean Coordinating Centre for Humanitarian Assistance on disaster management (AHA Centre) through its Union Enterprise for Humanitarian Assistance, Resettlement and Development in Rakhine, formed last October. It is incumbent on the chair to convince the international community that this cooperation is pivotal to implementing the recommendations of the Kofi Annan Advisory Commission on Rakhine State. 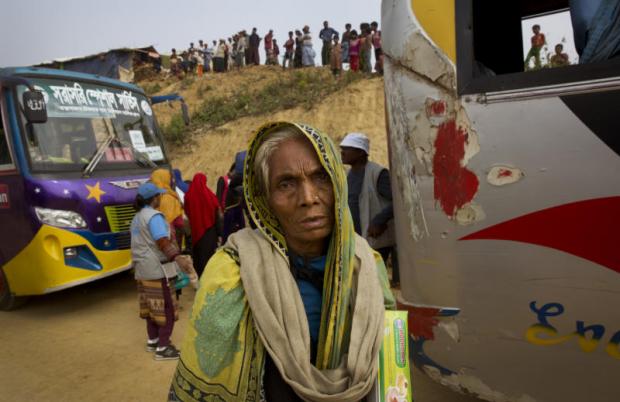 An elderly Rohingya refugee woman arrives with others at a transit camp in Bangladesh last month. The humanitarian debacle is one of the three major issues on Asean's agenda. (AP photo)

Meanwhile, the Advisory Board for the Committee for Implementation of the Recommendations on Rakhine State, formed by Ms Suu Kyi and headed by former Thai foreign minister Surakiart Sathirathai, has yet to start work following the dramatic exit of US diplomat Bill Richardson, one of its five-international members, during its first meeting last month. For the board to proceed in an effective manner, proper sources of funding and mandates must be worked out quickly. Taking up the job as an individual without any affiliation, Mr Surakiart has a steep slope to claim.

The second challenge is the future of the South China Sea, Singapore has dual roles -- as Asean chair and coordinator of Asean-China relations. As such, Singapore's priority is to see to it that overall ties with the world's No.2 economy are robust and that the drafting of a binding code of conduct (COC) to manage tensions in the South China Sea proceeds expeditiously.

Although Singapore and China relations recently suffered some hiccups over the seizure of armoured vehicles in Hong Kong, both sides rectified the problem and quickly normalised their friendship. They now share pragmatic views on one another.

Under Singapore's oversight, it is hoped Asean and China will be able to begin working on a separate protocol governing unexpected encounters at sea as well as in the air, provided there are no provocative acts from conflicting parties. Furthermore, Asean-China maritime exercises are expected to be held later this year.

The recent Asean Foreign Ministers' retreat's statement made clear the regional grouping is worried about China's intentions in the South China Sea and expressed concern about land reclamation going on in the contested area, which, it says, "has eroded trust and confidence, increased tension and may undermine peace, security and stability in the region". Since 2015, Asean ministers have allowed dissenting views to be included in Asean-related statements, especially those related to the South China Sea to prevent the recurrence of Cambodia's faux pas in 2012 when the grouping failed to reach an agreement on China's claims on the disputed territory.

Therefore, it remains to be seen whether the forthcoming 23rd Asean-China Joint Working Group on the Implementation of the Declaration of Conduct of Parties in the South China (DOC) would produce a breakthrough. It took Asean more than 12 years to complete and agree on the guidelines of DOC. Asean aims to finish the South China Sea code of conduct by the end of this year if all sides display the political will to turn the troubled maritime zone into a sea of peace and harmony.

In addition, North Korea's nuclear crisis is a serious challenge to Asean unity. For decades, Asean has wanted to act as a bridge-builder among the conflicting parties (the US, Russia, China, Japan, North Korea and South Korea), which are all members of the Asean Regional Forum. But most members of the Six-Party Talks, especially the US and Japan, feared Asean would not be tough enough in engaging North Korea.

Over the past year under the Donald Trump administration, the US's pressure on North Korea has greatly intensified, forcing Asean members to rethink their relationships with Pyongyang. In the past, they half-heartedly implemented UN Security Council resolutions on sanctions while maintaining "business as usual" with Pyongyang. Now, Washington's continued pressure on Asean to forcefully implement all UNSC measures is finally being taken seriously. The substantial commercial and financial links Asean members used to have with North Korea have all but ceased.

As relations between South and North Korea enter a new phase during the 2018 Winter Olympics, Asean members must continue their sanctions without wavering even if those relations improve. Washington and Tokyo are concerned that Pyongyang's charm diplomacy will yield big results in weakening the "coalition of the willing" against the North.

While the chairman's statement from the Asean ministerial retreat last week welcomed the resumption of inter-Korean talks, Asean leaders continue to strongly urge Pyongyang to denuclearise and comply with the UNSC resolutions.

It must be noted here that Asean's perception about North Korea's nuclear threat is different than that of the US and Northeast Asia. First, even though all Asean countries are geographically located within range of Kim Jong-un's newly developed intercontinental missiles, they do not think Pyongyang will target them. Second, Asean wants to keep the door open for dialogue to ease tension and reduce the danger of nuclear war. Third, the regional grouping's position on North Korea is directly linked to China's. Given the concurrent tension over the South China Sea, Asean does not want to complicate its ties with China further. For instance, Thailand recently downgraded its participation in the Vancouver meeting on North Korea last month after Beijing told Bangkok that China was not invited. At this juncture, Cambodia and Laos have maintained closed ties with North Korea.

In the past one year, the US, Japan and South Korea have pressed Asean to take a stronger position against North Korea's missile tests and in implementing the UNSC resolutions. Asean has issued nearly 30 statements on North Korean crisis in the past six years. However, the lull in hostility between the two Koreas and Seoul's new softer approach to Pyongyang could affect Asean and its ties with Japan.