The Future Forward Party (FFP) is facing stiff competition even from the ranks of parties considered to be its allies, and the reported undercurrent being whipped up within the FFP is not helping the situation. 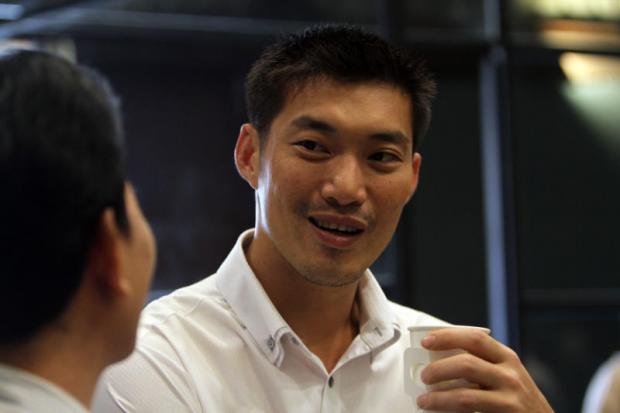 Many big as well as newly established parties are advertising their young, new members as major selling points for the next election.

The snowball effect may have been started by the FFP, which has clearly positioned itself as a new dawn for the country's politics. Its leader, Thanathorn Juangroongruangkit, 39, was not shy when he announced his target demographic people under the age of 30 and that his party's policies are geared toward bringing change to society, according to a political observer.

But some of the changes, such as abolishing the wai khru ceremony that pays respect to teachers, which he planned to introduce if his party was included in the next government, have hit a nerve with many conservatives.

For a while after it debuted on March 15, the FFP enjoyed a meteoric rise to political stardom.

Analysts said its popularity was owed in large part to its list of young executives whose backgrounds were free from political involvement or affiliation, and who demonstrated their ability to communicate with supporters in their late teenage years and early 20s.

Many people in this age bracket are first-time voters who are predicted to form the biggest supporter base for the FFP.

But if the party was able to carve a niche for itself so quickly, so can others, analysts say.

The Pheu Thai Party has been accused by critics of having spun off the Thai Raksa Chart Party, whose leader, Lt Preechapol Pongpanich, was the former Pheu Thai MP for Khon Kaen. He is also the son of Sermsak Pongpanich, the former deputy interior minister.

Pheu Thai's archrival, the Democrat Party, has also jumped on the new-blood bandwagon. The party on Tuesday showcased its own homegrown batch of aspiring young politicians, who put forth ideas to be incorporated into the party's election manifestos.

Mr Parit, 25, who has just finished a six-month stint as a soldier with the 11th Military Circle, said the group was looking to capture voters who never voted for the Democrat Party before, as well as younger people in general.

The entry of all these "new wave" politicians in recent weeks has diverted people's attention away from the FFP. At the same time, a source of friction inside the party is beginning to emerge.

A message posted on social media by somebody claiming to be the FFP's "backroom" strategist included a photograph of the man with Mr Thanathorn.

The man, whose name was not given, said he felt the party was not "open" enough in the way it manages its internal affairs despite the FFP's position of embracing a more liberal political path.

Also, a recent verbal spat between a university lecturer, who was once an avid supporter of the FFP, and the lead teenage singer of a hugely popular girl band could see the party suffer more harm to its image.

Although most of the band's fans are too young to vote, by associating with the lecturer the party risks being seen as harbouring some animosity to the band's legions of fans rather then being "on their side".

The lecturer criticised the singer for her role in promoting a government project, which he likened to condoning a dictatorship.

The FFP, in trying to stem the damage, has distanced itself from the lecturer after reportedly suggesting he may have acted immaturely. The lecturer responded by announcing he has severed ties with the party. 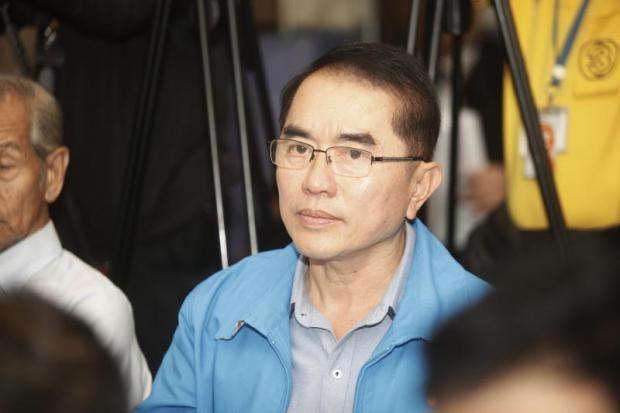 The moment of truth came this week for Abhisit Vejjajiva when the Democrat Party confirmed his return as its leader after he emerged triumphant in the party leadership race.

His name went to the party's general assembly which renewed his stint as the Democrat leader last Sunday.

However, some political watchers were wary of the possibility that the leadership competition may have left a breach in the party not visible to the naked eye.

The assembly also elected a new board of party executives.

Mr Abhisit's win in the leadership contest was not a decisive one, according to some political pundits. He was only 10,000 votes ahead of his closest rival, Dr Warong.

Pundits have interpreted this as a sign of growing displeasure among certain individuals or factions within the party with Mr Abhisit.

A total of 127,480 party members took part in the leadership vote. The voting was conducted over a week through ballots and a mobile phone application.

However, the votes accounted for only 16% of the total number of party members.

Dr Warong had performed much better than expected, the experts noted.

Right now, the immediate task that Mr Abhisit needs to concentrate on is to bring change to Thailand's oldest political party and steer it through the next general election expected on Feb 24, a party source said.

The political watchers, after sifting through the list of new executives, have taken stock of an interesting fact, which is that the majority of the party board members were Mr Abhisit's supporters in the leadership election.

The lack of Dr Warong loyalists in the line-up of executives has added fuel to rumours that the Democrat Party was split down the middle.

It has also prompted speculation that the team of politicians who rallied behind Dr Warong was planning to defect or break away from the Democrats to form their own party.

The watchers thought something was amiss at the post-leadership race news briefing where Mr Abhisit and Dr Warong were present.

Dr Warong reportedly walked out of the news briefing before Mr Abhisit was able to thank party members for his victory.

However, Dr Warong later posted on his Facebook page, accepting defeat. "I still confirm that I will work with the winner for the Democrat Party and the country," he said.

Dr Warong had said before the leadership contest was under way that he was confident the party members would welcome a changing of the guard since the party had been run by Mr Abhisit since March 6, 2005.

Dr Warong's team has denied that the former Phitsanulok MP, who exposed what was termed as systematic corruption in the rice-pledging scheme in the previous government, was out to establish a new order in the Democrat Party which is more "accommodating" to the regime.

Also, Thaworn Senneam, a veteran politician from Songkhla, has insisted Dr Warong's supporters, including himself, would stay put in the Democrat Party despite Dr Warong's defeat.

The politicians who backed Dr Warong would seek to run in the next election under the Democrat ticket. 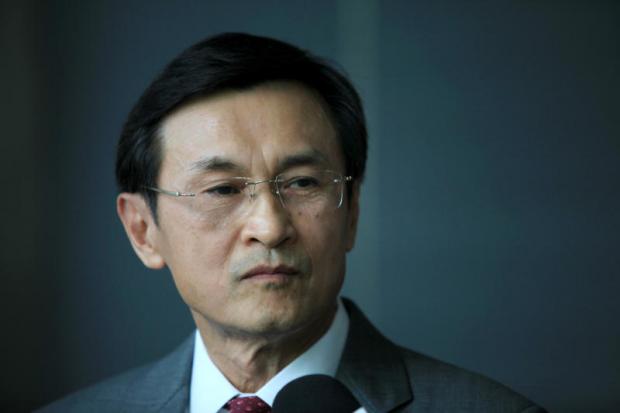 MPs jump ship to get seats

The much-expected exodus of senior Pheu Thai Party members to the Thai Raksa Chart Party -- widely touted as its ally -- is unstoppable although it is unfolding slowly.

Mr Chaturon, a veteran politician in Chachoengsao, has kept observers guessing whether he has packed his bags and is ready to move to Thai Raksa Chart. It is believed he will reveal his intention as early as next week.

According to political sources, several Pheu Thai heavyweights will have no choice but to switch to the new outfit -- that is, if they want to have parliamentarian status under the new election rule.

These politicians are mainly those who did not contest previous elections as constituency candidates but obtained their MP posts under the old party list system, which was introduced in the 1997 charter.

Under the old election system, party-list candidates were allocated seats based on the number of popular votes their parties received. Their constituencies were already dominated by their proteges even before the switch to the new election method.

Mr Chaturon, for example, has passed the torch to his younger sister, Thitima, and is likely to let her contest through the constituency system in Chachoengsao on Pheu Thai's ticket.

Likewise, Pheu Thai maverick Chalerm Ubumrung, who has a stronghold in Bangkok's Bang Bon area, is expected to give way to his son, Wan, under Pheu Thai's banner.

The two politicians have no place to contest the poll in the constituency system under Pheu Thai. But to run on Pheu Thai's list system would not be a wise choice either, because the former ruling party is not likely to pick up very many list seats under the current election method.

That leaves them with no option but "hop" to Thai Raksa Chart, dubbed Pheu Thai's sister party, where there are vacancies in its party list candidacy. Most important of all, Thai Raksa Chart is predicted by some poll experts to garner many seats in the list system, as it is not expected to win big under the constituency method.

But with the ex-Pheu Thai heavyweights, doubts remain as to whether Thai Raksa Chart can actually live up to its word and bring about healthy change.

Border patrols alerted to Covid-19 case in nearby Myanmar

KANCHANABURI: Local officials have again been warned of the need for tightened security along the frontier following reports that a teenager who lives near the border in Myanmar tested positive for Covid-19.

Vatican, China to renew historic deal, to US displeasure

VATICAN CITY: The Vatican and China are preparing to renew a historic deal on the appointment of bishops that has slightly thawed icy relations, amid US exasperation.

US retailer calls out climate deniers with blunt message on label

LOS ANGELES: Outdoor retailer Patagonia, known for championing environmental causes, has put it bluntly to voters in a label on a limited-edition pair of shorts that says "VOTE THE ASSHOLES OUT".