Prime Minister Prayut Chan-o-cha has a crab in the hand - and maybe in his trip. Before flying to Singapore, The Evil One and his fugitive sister were in the Ukraine during its first snowfall of the year. (Photos Bangkok Post, Instagram)

As RoboCop said to arch villain Clarence Boddicker in the climactic scene of the original movie: "I'm not arresting you any more." Rather than bringing them to justice, the green shirts now hope to be able merely to bring the world's only brother-sister fugitive ex-prime minister duo to heel.

The Evil One and the world's only felonious fleeing female ex-premier seem to think they can't. Last week they got cheekily in the face of the military regime about it.

They bragged they were flying to Singapore, whose government won't touch them. They boasted they are holding weekend meetings with leaders and senior backers of what are now four loyalist parties -- official names Pheu Thai, Pheu Chart, Pheu Tham, Thai Raksa Chart.

This is essentially a highwire stunt.

The testosteronic National Council for Peace and Order (Junta) went to some trouble to pass a precise law forbidding specifically what might be happening. If the junta finds that Lord Voldemort na Dubai or Lady Puddinhead na Chelsea are involved in any political decision-making, the guilty parties will be demolished, nay, atomised, and their leaders banned from politics.

It's interesting and suspenseful. If Pheu Thai's Gangs of Four and Voldemort make it all the way across the tightrope they've stretched so tightly for this weekend's show in Singapore, the regime gets disrespect for failing to find the gumption to enforce its own, single-purpose law.

The 54 months of military rule have garnered A-plus marks for achievement from themselves. World opinion won't stop the route march to semi-permanent power by Gen (Ret) Prayut, but it has taken a toll.

Just the trip to Singapore by the "fugitives" shows what a close, co-founder of Asean thinks about the quality of justice in Asia's only military regime. So do Facebook followers: 6,000,000 for her, to 447,000 for the next chairman of Asean. So does the necessity of the regime to replace solid business investments with undependable tourist arrivals just to keep Thailand's GDP growing, but at the lowest rate in Asean.

Speaking of the quality of justice, one success by the green shirts is the creation of the largest group of Thai political exiles in the nation's history. Which speaks quite loudly in the nation with an un-proud officially unmentioned history of Pridi Banomyong, Chatichai Choonhavan, Phraya Manopakorn Nitithada, Puey Ungphakorn, Plaek Phibulsonggram, etc, etc, etc.

Last week, South Korea strongly emphasised the amount of respect it has for the justice of the regime. It awarded full political amnesty to a 25-year-old woman who escaped 30 minutes before a quality interrogation session by officers of the 11th Military Circle, followed by hard time in a harsh prison for lese majeste.

The Seoul government showed it considers the Article 112 persecution of Chanoknan "Cartoon" Ruamsap should shame the junta overseen by Gen (Ret) Prayut and led on a day-to-day basis by Gen Apirat Kongsompong.

Ms Cartoon, like the equally unbending anti-regime activist Jatupat "Pai Dao Din" Boonpattarraksa of Khon Kaen, endangered national security by clicking "share" on the BBC Thai article about the monarchy carried on Facebook. So did 2,304 others who haven't been persecuted, according to the current numbers on the officially blocked BBC site. 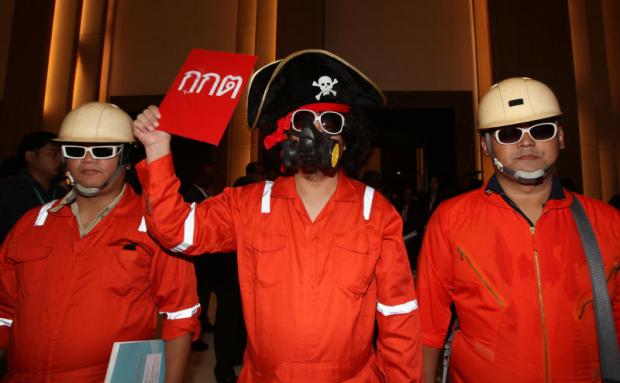 Jailing Pai and charging Ms Cartoon and teasing the country about when the hammer will drop on the Parties of Pheu all are done under the law. "Justice" seems an exaggerated description, and certainly it's not equal treatment. But it's definitely law under the military, and you know what they say about the phrase "martial law".

We now have the highly motivated and trustworthy Election Commission. They will apply laws across the board and completely fairly. For example.

Last week, the EC ruled that no political group, no matter who, can sell party merchandise online. This derivative rule by law applies to everyone, completely fairly, because otherwise it wouldn't be a free and fair election.

It's just a coincidence that Thanathorn Juangroongruangkit's Future Forward Party was the only one ramping up sales. The EC's rule will apply to everyone, even to parties that support the continuance of Dear Leadership.

Because that's what free and fair means for elections.