Pedestrians, keep calm and be mindful

Signs forbidding vehicles on the pavements are so common that no one pays them much heed - even though they promise fines on the spot of 5,000 baht. (File photo)

Readers from most countries would probably have been shocked by the recent story of a teenage girl in Bangkok who was knocked down while walking along a footpath by a speeding motorcycle.

However for us Thais, given our first-hand experience of dealing with rogue motorcyclists, this kind of thing is far too commonplace.

On Monday morning the pedestrian, a secondary school student, was hit by a messenger bike while she was walking on the pavement along Lat Phrao Road. She suffered minor injuries and was sent to a nearby hospital. The incident went viral after it was shared on social media by a bystander. Netizens angrily condemned the reckless messenger, demanding he face the maximum penalty.

The Royal Thai Police (RTP) responded by admitting there were too many motorcycles on the footpath in the area, which falls under the jurisdiction of Chok Chai police station.

At the same time, Bangkok governor Aswin Kwanmuang scolded the messenger but defended his tessakit city inspectors for keeping an eye out for careless motorcyclists.

But the problem will not go away as that would require a more sweeping change in attitude. Pol Gen Aswin urged all motorcyclists to think how would they feel if the victim had been their sister or daughter. He also referred to the fine -- up to 5,000 baht -- the offender will likely be slapped with, in line with the Public Cleanliness and Orderliness Act. The Land Traffic Act has provisions to add another fine of up to 1,000 baht.

The harsh words delivered by Pol Gen Aswin and the RTP amazed me, as it is hardly a new phenomenon to see motorbikes tearing along the pavement in full disregard of the law and public safety.

Do the police and the governor, a retired police general, really believe these people don't know they are breaking the law and could be fined? I'm sure everyone is fully aware of that, but they simply adopt a "couldn't care less" attitude. It's much easier to speed along a footpath and honk at any pedestrians who block their way than slow down.

Turns out it was also a lot easier to blame this "incident" on a shortage of traffic police than examine the lack of law enforcement, or negligence of the authorities and the so-called S-Guards they invented that are supposed to prevent motorcycles from entering footpaths.

The motorcyclists always create their own "special lane" while police turn a blind eye and the city inspectors are preoccupied chasing street vendors and collecting "fees".

I'm sure many of the motorcycle taxi drivers who have been assigned by City Hall to monitor the illegal use of footpaths -- for a share of the fines/spoils -- were happy when vending carts were banned. Many footpaths were cleared of vendors but have not been improved for pedestrians. 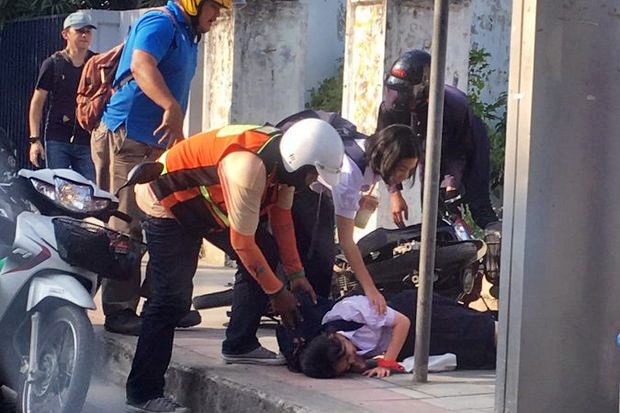 motosai-pedestrian.jpg Pedestrian down: The inevitable happened on Tuesday when a 16-year-old student on her way to class was struck by a motorcycle on the pavement. She was sent to hospital, but is out of danger. (Twitter/@EmaEmika)

It is time the governor and police apprised themselves of the fact that riding illegally on Bangkok's pavements is almost as famous as Bangkok street food.

British Grand Prix racer Scott Redding, who was in Thailand last month for the MotoGP in Buri Ram, recorded some footage as he walked along one of the city's footpaths one evening. At least five motorcycles can be seen passing his camera before the short clip ends. Redding also pointed out how common it was for motorcyclists to avoid congested roads by hopping onto footpaths.

I wonder if the governor is aware that Redding -- who has to ride under strict rules on a professional racing circuit -- has condemned Bangkok's pavements to his legions of Instagram followers. It is quite shameful.

Before the governor gets angry and vows to change motorcyclists' attitude, he should consider thinking about how to make his staff do their jobs properly. (Incidentally, that same morning a foreigner was injured when he stumbled into a one-foot-tall steel pole rising up from the middle of a footpath in the Sathon area. God only knows what the pole was doing there!).

It's difficult for foreigners, especially those coming from litigation-friendly nations like the US, to understand why walking on a city footpath can be such a challenge. But Thais are more skilful in avoiding harm to stay safe.

Having grown up in Thailand, where people are proud of living in a Buddhist country, I see all these street mishaps as an exercise for us to be mindful wherever we are and whatever we do -- be it crossing the street or walking on a footpath. They want Bangkok to be a good place for people to practice mindfulness with their every breath.

Let's all keep calm and be mindful.