The price of prejudice
Opinion

The price of prejudice

Luxury fashion house Dolce & Gabbana made an irreversible mistake with its racist mishaps just recently when they posted a series of short video advertisements on social media that made fun of Chinese culture. The videos enraged the entirety of China simply because the fashion powerhouse stereotyped people from different racial backgrounds.

The video series, featuring a Chinese lady struggling to eat pizza, cannoli and spaghetti with chopsticks, immediately prompted a #BoycottDolce hashtag. The gravity of public disapproval forced designers Stefano Gabbana and Domenico Dolce to cancel their Shanghai fashion show -- the biggest in its 33-year history -- just hours before it was due to start. 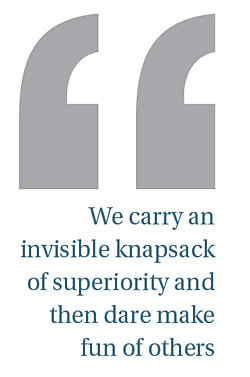 The designers' video apology came too late. The damage was done and the world's most important luxury market was angry. The chopstick debacle puts the future of the brand at stake.

Back to Thailand, where the people see the Dolce & Gabbana chopstick incident as insulting, somehow we too stereotype people from different social backgrounds. Chorlada Tarawa, a 38-year-old shopping-mall employee who died of an acid attack recently, is a case in point. She was attacked by her taxi-driver husband, who was accused of pouring acid into her mouth and on her face out of jealousy.

Accompanied by her 12-year-old daughter, Chorlada rushed to Praram 2 Hospital in the hope that any doctor on duty would be able to provide her with the much-needed emergency treatment, as she was in severe pain and her face was starting to melt.

But things turned from bad to worse when Chorlada was refused treatment and was instead given 40 baht by a nurse to catch a taxi to another hospital where she was covered by the state health-insurance scheme. Chorlada died shortly after arriving due to unbearable physical pain. Her daughter is now facing the emotional consequences.

Praram 2 Hospital will face multiple legal actions for rejecting this poor patient, according to the Health Service Support Department. Charges include the failure to have a doctor on duty around the clock, then a failure to make out a report on the incident, to issue a letter referring the patient to another hospital and to provide the patient with appropriate transport. The management of Praram 2 Hospital was also found to have failed to act in a professional manner to treat a patient whose life was in danger.

Amidst all these accusations, the hospital is to correct their mishaps within 15 days or it will risk losing its operating license. The hospital's future is now at stake.

Such discriminatory blunders take place every day regardless of place. Last week in Myanmar's Rakhine state, around 100 protesters took to the street, rallying against the return of Rohingya Muslims from Bangladesh. They said Myanmar would see no use in accepting "the Bengalis", a derogatory term for the Rohingya in Myanmar who were referred to as runaway refugees. Worse, the protest was led by Buddhists monks who are supposed to show unconditional mercy to all mankind.

In developed countries like Britain, gender discrimination is still there. Statistics revealed just recently that around one-third of young gay, lesbian and bisexuals aged 14-19 experienced a mental disorder. The National Society for the Prevention of Cruelty to Children said that every day there are children and adolescents who are targeted because of their sexuality.

Prejudice like this looms large in every part of the world -- whether it's developed, developing or underdeveloped countries. Prejudice like this provokes ire, kills many and rips people from the rights every human is entitled to. This is all simply because we discriminate against people we see as different and stereotype them as inferior.

People see differences -- culture, gender, age, race, religion and political stance, among others -- as a subject of mockery and hilariousness. We carry an invisible knapsack of superiority and then dare making fun of others. We look down on and shun others without realising we are all human beings regardless of differences and that a positive value should somehow be placed on those differences rather than tearing it apart.

Isn't it normal to be different? Is diversity actually a social pattern that is supposed to exist in all communities without being judged?

Long before the chopstick-ad flop, the behaviours of Chinese tourists in Thailand were once heavily criticised too, especially in travel destinations where they sometimes acted in a way many deemed weird and unacceptable. We wanted them away from our sight. Now Thailand strives to make them return, thanks to the sharp plunge in the number of Chinese holidaymakers who were turned off by a series of unfortunate events which greatly affected tourism-related revenue.

It's time to learn from the Dolce & Gabbana chopstick dispute and stop being rude to people who are different. Respect diversity before things become hopeless.