Prime Minister Prayut Chan-o-cha presides over the launch of the Pracha Rat (People's State) initiative in Bangkok in February 2016. The policy has been criticised for being populist. TAWATCHAI KEMGUMBERD

Initially, after the 2014 military coup, Prime Minister Prayut Chan-o-cha gave us reason to hope that he could bring about drastic changes to Thailand's political norms -- among these, an "addiction" to populist policies.

In September 2014, he delivered a statement to the National Legislative Assembly comprising 11 types of policies. None were considered typically populist.

In one of his weekly televised addresses, Gen Prayut also asked politicians to rethink their reliance on populism, saying they should not have to depend on such policy platforms to win elections. There are many other ways to gain support from the electorate, he said.

His remarks stoked optimism that populism might finally be a thing of the past.

In fact, Gen Prayut's and the junta's efforts to root out populism were initially quite impressive, particularly the enactment of laws to restrict the introduction of such policies.

Section 142 of the 2017 Constitution, written by drafters appointed by the regime, stipulates that annual appropriations bills, proposed for parliamentary approval by a government, must show sources of revenue, estimated revenue and the expected outcome or output derived from the expenditure.

The 2018 State Financial and Fiscal Discipline Act, published in the Royal Gazette in April, also prohibits cabinet members from financing their policies with state funds in ways that could be damaging to the economy. Additionally, the law requires future governments' compliance with the regime-invented 20-year national strategy when it comes to budget allocation.

When proposing their annual budgets, all cabinet members are required by the new laws to adhere to fiscal discipline, prevent causing excessive public debt and to take the benefit of both the state and the people into account. They must also avoid taking risks that may cause financial or economic damage to the state.

Gen Prayut himself played a key role in spearheading those efforts before making a dramatic U-turn. In early 2016, his government came up with its Pracha Rat scheme, touted as a form of "welfare for the poor", in which local projects are funded through the injection of substantial state funds.

With Gen Prayut still refusing to rule out a return to the PM hot seat after the general election next year, and with four of his cabinet members at the helm of the Palang Pracharath Party, such measures have received fierce criticism for being populist policies. 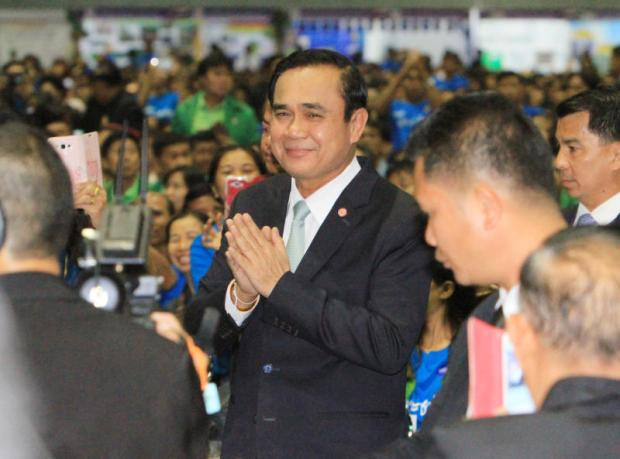 Prime Minister Prayut Chan-o-cha presides over the launch of the Pracha Rat (People's State) initiative in Bangkok in February 2016. The policy has been criticised for being populist. (Photo by Tawatchai Kemgumberd)

It seems the Prayut government, too, cannot resist the appeal of populism.

Populism in Thailand was championed on a large scale by the Thaksin Shinawatra administration of the now-dissolved Thai Rak Thai Party. The party wooed voters with policies such as the universal healthcare scheme, the one tambon, one product (Otop) initiative, low-cost housing schemes, farm debt suspension and the village fund scheme. These policies played a critical role in helping a then relatively young party gain a landslide victory in the 2001 election, in which it gained 248 MP seats out of 500.

It was the first time a political party had used its policy platforms to win votes, rather than the influence of local politicians.

Populist policies continued to help Thai Rak Thai achieve a historical landslide victory in the 2005 election. With 377 seats in the Lower House, it became the first party to form a majority government.

Unfortunately, Thaksin's hubris triggered prolonged street protests against him which were a pretext for the 2006 coup. His party was also later dissolved.

The People's Power Party, a reincarnation of Thai Rak Thai, pursued its predecessor's populist policies in the 2007 election. With 14 million votes, the party won the election with 233 MP seats.

As the political crisis and the anti-Thaksin protests went on, two People's Power Party prime ministers -- Samak Sundaravej and Somchai Wongsawat -- lost their jobs and the party was dissolved in a court ruling.

The political momentum then turned to the Democrat Party. Democrat leader Abhisit Vejjajiva became prime minister in late 2008, and he also adopted populist policies such as free education, a 600-baht monthly allowance for village health volunteers, a 500-baht monthly allowance for the elderly, and community land title deed distribution. Like it or not, some of their policies were recycled and repackaged versions of those of previous governments (but with even more financial injections). For instance, the sufficiency economy fund was seen as the reincarnation of the previous administrations' Small-Medium-Large village funds and policies to provide free public transport and free utilities.

The Thaksin camp, under the Pheu Thai Party banner, then contested the 2011 election with a range of second-generation populist policies. They included the controversial rice-pledging scheme, a 300-baht daily minimum wage, tax breaks for first-time buyers of homes and cars, corporate tax cuts, free tablets for students, and a minimum starting monthly salary of 15,000 baht for new university graduates in state jobs.

These policies resulted in another landslide victory with 15.7 million votes, and an absolute majority of 265 MPs, which saw Yingluck Shinawatra become the country's first female prime minister.

During 2011-2015, the state spent more than 827 billion baht on those policies, according to the Office of the Auditor-General. Unlike the first generation of populism, several Pheu Thai policies both distorted the market and risked damaging state fiscal discipline. The claimed damage caused by its rice-pledging scheme saw Yingluck flee a court ruling against her.

Given the historical election successes of parties which have employed a populist approach, it comes as no surprise that Gen Prayut and his government have actively launched more policies of the same kind just a few months ahead of the Feb 24 election, even though they strongly insist these are merely efforts to support the poor.

In fact, not all populist policies are bad. Thai Rak Thai's universal healthcare scheme has become internationally praised, and the Otop and village fund schemes still benefit people. It is more the case that the Prayut administration's 100-billion-baht welfare for the poor scheme does not seem to be either an effective use of the money or sustainable in nature.

With the perceived tilt toward populism, Gen Prayut may well have lost an opportunity to become a great leader who made drastic changes to the country's political landscape.

SONGKHLA: A large tree, over 200 years old, collapsed on a house inside the grounds of a temple, crushing a man to death and damaging a car in Sadao district early on Sunday.

JERUSALEM: Jerusalem braced for a controversial "flag march" on Sunday as Israelis mobilised to commemorate the city's unification and Palestinian groups threatened retaliation over the annual rally that sparked a war last year.