Fairness needs to be ensured
Opinion

Fairness needs to be ensured

Rules, regulations, paperwork, make-work and 'no campaign posters until we say so' tilt the field to the advantage of the well-funded pro-military party.

In sports, as in politics, they call it a "tilted playing field". One or many tiny modifications to the game area give advantages that don't absolutely guarantee that the home team wins, but help to make it more likely.

EC members spent a gruelling one-sixth of one of the five days it had to set an election date -- one thirtieth of their allotted decision time. Then the team announced "March 24" exactly as the cabinet's designated influencer, Deputy Prime Minister Wissanu Krea-ngam, had recommended.

A day later, the EC began the petty harassments that will bedevil political parties for the next 55 days.

"Take down those unauthorised election posters until we certify that they show an approved, actual election candidate on an authorised electricity pole." To be fair, at least one Palang Pracharath Party (PPRP) candidate was also victim of this particular, completely pointless shenaniganry.

Oh, and then get those party manifestos and biographies offline. The internet is restricted for election campaigns. It's going to get worse. It's clear the EC has been convinced to play twopenny-halfpenny with new and upgraded rules. You've met this before. This is your 8th grade hall monitor, the one who didn't like you.

The very first foreign reaction to the election-date announcement was by Pirkka Tapiola, the EU's ambassador to Thailand. He tweeted that he wishes for an "open and peaceful campaign with level playing field".

Fair enough. We wish for Bangkok Post Sunday to buy us a red Ferrari. We and Mr Pirkka appear to have equal chances. 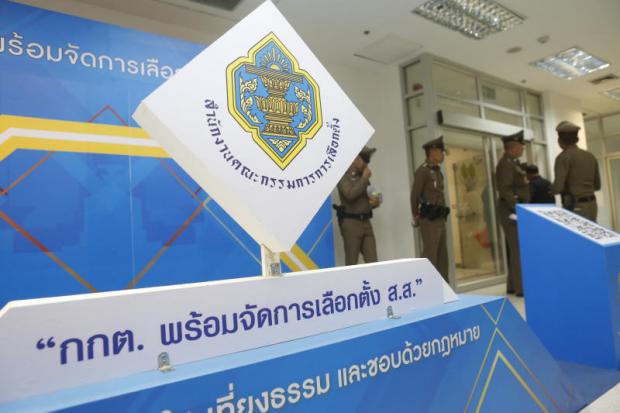 Ready for action: The Election Commission says it stands ready to run the poll but early signs belie the promise..

Many of the election rules are new. (As indeed is the entire ballot procedure on Election Day.) (As is the process of counting votes, seating MPs and forming a government in ways never known or contemplated in days pre-Prayut.)

Posters are regulated tighter than the media. Parties can't put photos of popular figures. The Democrats can't show World War II hero Seni Pramoj or respected Chuan Leekpai. No party can show the show-biz stars who support it. Of course all photos of Lord Voldemort and the world's only felonious female fugitive ex-premier are banned.

A unique violation of parliamentary protocol is the outright refusal of the regime to assume a caretaker status. This is ethical governance, where the government stops making policy and passing new programmes and spending new money.

The leaders of the pro-military political party moonlighting as cabinet ministers will resign "at an appropriate time", not when public decency and protocol demand. All fine by the EC.

Moving to caretaker status is honourable respect to the democratic notion that a new government is due. No matter who is elected, a new administration will be sworn in. Horrendous misreading of parliamentary democracy and excessive pride will keep this government active, accepting new laws and spending additional tax billions.

For example, it will consider and then actually spend 2.3 billion baht for yet another 14 model MBT3000 main battle tanks from China. At the moment, the army has a mere 39 such tanks. Who can deny it's not enough 52-tonne Big Armour and guns to face the Myanmar invasion.

That military outlay plan is reported to be scheduled to reach cabinet in March, maybe March 19, five days before the election -- because any day is a good day for a dedicated government to remind the country that it's never polite to say, "No tanks".

For the EC, being in office and approving more laws and more spending is no advantage in the election campaign. Perish the thought.

The government is breaking hundreds of years of global parliamentary protocol because they are absolutely dedicated to this nation. There is no thought to how much it helps green shirt candidates to run downhill to get elected and cling to power.