Trying to find N95 respirators -- a type of facial mask that can deal with small particles or PM2.5 -- is a troublesome task for many people living in smog-hit Bangkok.

City people have faced this haze for several weeks. As the situation remains serious, demand for the masks is increasing, resulting in shortages. Some traders have taken this opportunity to raise prices. People are saying they have to pay different prices, ranging from 30 to more than 100 baht, for similar types of plain masks.

The poor -- people whose jobs require them to work outdoors, those who live in non-air conditioned houses, and commute by public buses -- are suffering more than their compatriots who are on the higher level of the social strata. A friend of mine encountered a poor mother and her daughter who went to a drug store to buy a mask. Upon finding out the price, the woman hesitated. She had to pay a high price, more than half of her daily wage, to protect her and her daughter's health.

It's sad to see innocent people, those who contribute little to toxic haze, suffering from financial burdens caused by this crisis.

Our policymakers should have foreseen this filthy air crisis decades ago when they decided that Thailand would become a "new industrial country". Under their leadership, our national resources were used massively to promote an export-oriented economy and some rules were relaxed to accommodate industry. As the country aimed for growth, people's health was compromised.

It was in the late 1990s that social movements were successful in pushing for progressive health policies -- including the use of sin taxes for health prevention and promotion programmes, the launch of the universal healthcare coverage scheme and a law on environmental and health impact assessments. Some achievements were won following street protests.

But the state remains weak in dealing with industry. Worse, some policymakers have separated health issues from the industrial development policy, meaning health is the sole responsibility of individuals. They forget that people's poor health could be the result of bad state policies and weak law enforcement.

This attitude is deep-rooted in economic policy. It explains why citizens must take care of themselves, protecting their health from the haze, while the leaders are clumsy and indecisive to deal with the sources of haze.

Remember when haze from Indonesia engulfed the lower part of southern Thailand in 2015? At that time, the office of the Phuket governor chose not to alert local residents in the first week after it detected the air pollution. This decision was based on fears that a severe haze warning would affect tourism. Under these circumstances, local people were unsure how they should react to the health hazard disaster. 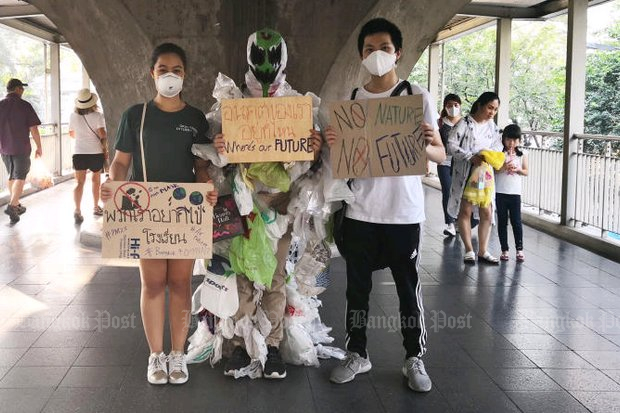 Student-members of Grin Green International stage a street campaign to call for clean air and a healthy environment for young generations. (Photo by Paritta Wangkiat)

When the proposed sugar tax was fiercely debated in 2016, the government delayed tax enforcement to appease sugar and beverage companies. A year later it announced a six-year transition period for the industry, despite the prevalence of diabetes and hypertension which was increasing at a fast pace.

The government failed to take action on clean energy in the automotive industry as the operators demanded a 20-year transition period even though it's well known that the combustion in fossil vehicles are a major source of fine particles. The state has ignored civil society's call to enforce a rule that requires factories to provide pollution information to the public.

Margaret Chan, the president of Global Health Forum, said the main actors such as the state and private sectors knew the problem behind the rise of NCDs.

They did not act properly because, she said, health is little different from politics. It ties with money and the powerful industries that resist any changes.

On the ground, I saw some encouraging moves by ordinary citizens, a group of young students, whose health is at risk from ongoing air pollution.

These young people raised signs and placards to campaign for clean air while passers-by, most wearing masks, looked on.

The students complained about school closures, announced by the Education Minister, which means they had to wear the burden for problems they did not create.

Their messages: adults should be aware of their rights to clean air and good environment.

Their move, while still small, reflects that some people want changes for the better.

It's about time policymakers pay serious attention to these small but meaningful voices.