In the Netflix original series Kingdom, the virtuous crown prince Lee Chang gallops off to a faraway land in search of an ancient doctor to help him unravel the mysterious circumstances of his father's death. Meanwhile, a wicked nobleman tries to resurrect the king for his own nefarious purposes. But in so doing, he turns the dead king into a bloodthirsty zombie. And we all know what a zombie bite does to its victim. A zombie plague ensues, spreading throughout the land.

Movies and TV dramas, no matter how fanciful the plot, are reflections of reality. Kingdom is a mixture of Game Of Thrones and The Walking Dead -- a commentary on a society where power struggles overshadow much more serious issues that require immediate solutions.

That is perhaps the best explanation of where Thailand is now. Few dramas can come close to the roller-coaster ride of Thai politics, full as it is of drama and tension, twists and turns. Ahead of a long-awaited election, the country sees its junta chief and prime minister manoeuvring to retain his position. We see a beloved member of the royal family -- a princess -- is nominated as a candidate for prime minister for the first time in history and a royal command, issued just 13 hours later, saying she is above politics. 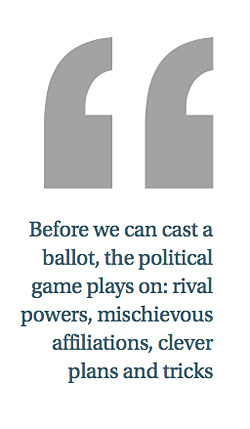 There is comedy too, with the campaign posters of one political party depicting its celebrity candidates as superheroes, as if they have the supernatural power to pull the country out of its malaise. Their slogan, "We Are Hero", saying that everyone can be the one to move the country forward.

But before we can cast a ballot, the political game plays on: rival powers, mischievous affiliations, well-thought-out plans and tricks.

In Kingdom, Prince Chang wants to protect the throne from a malicious minister and his sinister plans. But when he is confronted with a horde of undead monsters attacking his people, he does what needs to be done. Prince Chang has his priorities right. The same, sadly, cannot be said for his real-world counterparts here in Thailand.

Thailand is facing a number of major public crises. There is the environmental disaster of PM2.5 and the toxic haze that is still wreaking havoc after so many weeks. This is not to mention issues like education, teen pregnancy, poverty, inequality, public health, domestic violence, alcohol and drug addiction and human trafficking, to name just a few.

A few years ago, Thailand had the second highest number of teen pregnancies among Asean countries, with statistics from the Department of Health reporting that children as young as 10 had got pregnant, mostly as a consequence of sexual harassment. In education, surveys from the National Statistical Office revealed in 2015 that almost 40% of young children -- around 1.8 million people -- did not read, and that over 10% of Thais aged 15 to 19, 1 million people, did not read.

The Narcotics Control Board reported that over 30 million amphetamine pills were seized in 2016. The following year, that number rose to 200 million. An estimated 40% of people involved in drug crime and consumption were aged 15 to 19 years old.

These are just glimpses of the social issues that need to be urgently tackled. As long as those in power are more preoccupied with stabbing each other in the back than working to solve the nation's many ills, it is the country that will sustain the most severe wounds.

The realities of the Thailand we see today are not unlike what happens in Kingdom. The only difference is that we're not looking forward to what happens next in the real world.